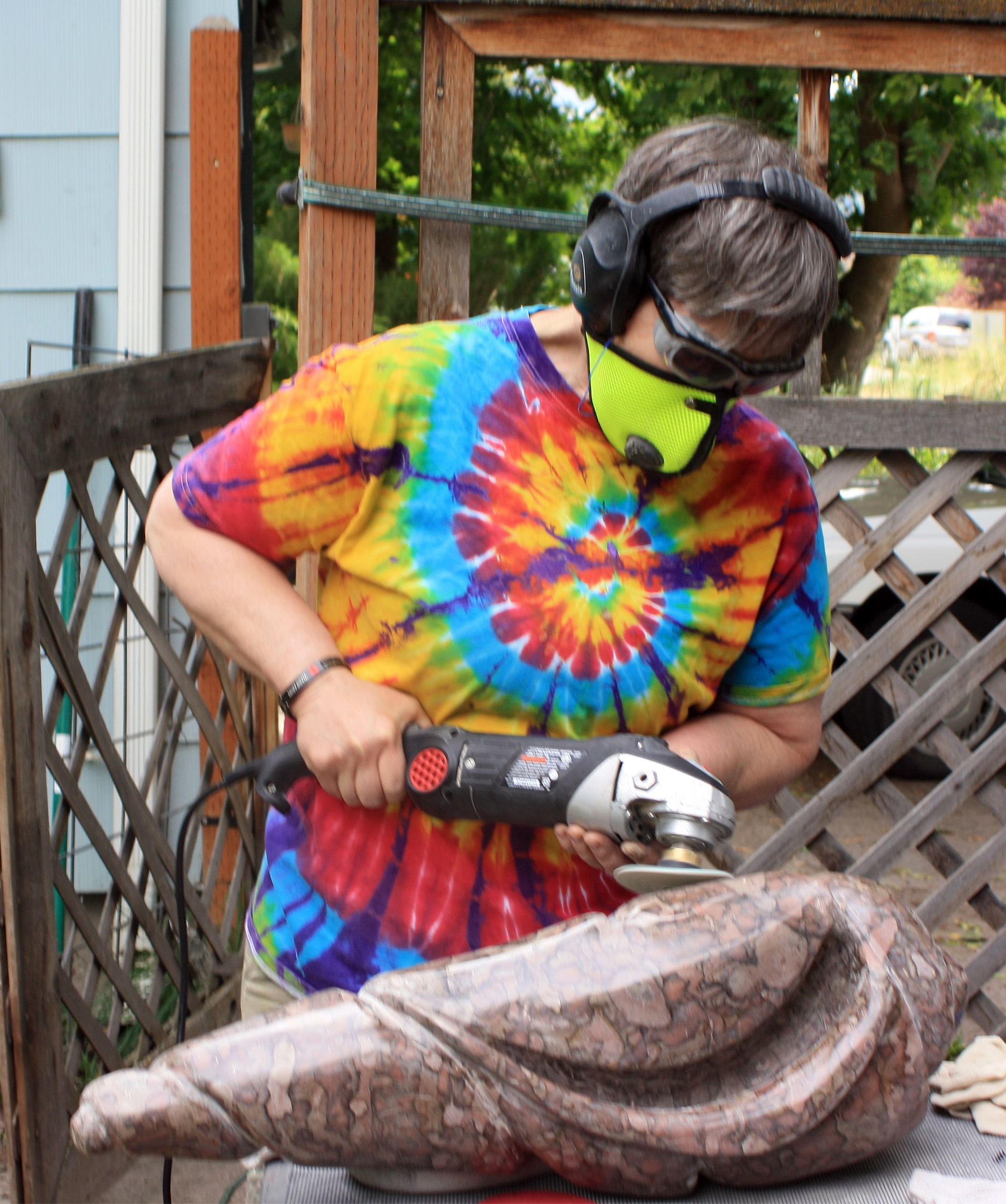 I can’t remember a time when making art has not been a part of my life. My dad commented once that I was born with a pencil in my hand, and he did so much to keep those “pencils” around me.

In kindergarten, my favorite place was at the mini easels, spreading brightly-colored tempera on large sheets of newsprint. I wasn’t satisfied with a single-colored finger painting, and insisted on three or four colors that I would mix and blend, and I would use more than just my fingers to find different textures. Sandbox time would have me creating large piles of packed, damp sand that I would carve into turrets, towers, and moats, using popsicle sticks taken from the art corner. My kindergarten teacher was a very tolerant woman.

All through school, I gravitated to classes and projects that allowed for my need to create. This was difficult sometimes, as we moved almost every year during my middle school and high school years. I was able to take art classes the last two years of high school and got my first taste of stone carving when I released a small seal from a block of soapstone.

It was no surprise to family and friends when I entered college as an art major. Finances dictated that I would attend the local state school, though my father regretted that I didn’t get training of a more classical nature. I worked on the basics. Drawing: walking into that first class was an eye opener—my first exposure to drawing nudes; Painting: we did not make our own paints, but we did stretch our own canvases; Ceramics: my preference was hand building, a choice that was encouraged by the instructor Rudy Autio; and Sculpture: stone was not part of the curriculum—the teacher was into “found” and “performance” pieces.

It was an Art for Elementary Education Teachers class that influenced me most in my philosophy about my art. The class was not a required course for art majors, but it was taught in a space next to the painting studio, and I was fascinated listening to the lectures by the instructor, Richard Reinhardt. When I had the opportunity to take a few electives, I signed up.

Imagine sitting in a room with a bunch of young adults who probably hadn’t picked up a paint brush since grade school. In walks a normal-looking guy in a sport coat, and the first thing he does is jump up on a table and tell us to do the same (this is 1984, mind you, long before Robin Williams and “Dead Poets Society”.) As I already knew where this was going, I was the first up, and I gazed down at our soon-to-be teachers of children. Mr. Reinhardt told us to look around, and then asked us to take a seat on the floor and do the same. “Children,” he said, “see from all perspectives and use all of their senses, a process we lose as we become adults.” He then invited us to move about the area, viewing the space in different ways. Many students were still tentative, but over the next fifteen minutes, some were able to get over “looking stupid” and being uncomfortable and get very inventive with their “seeing”. Over the semester, supported by several more insights from Reinhardt, most of these folks bloomed in their creativity. On the day of finals, we presented projects we had worked on in small groups. It was heartening to see so many ideas and so much diversity in one space.

I moved to Wyoming after graduation, with degrees in Fine Arts and Elementary Education and found myself unable to get a job in my chosen field, as I was overqualified. So I became an emergency medical technician and worked as a ward secretary in the local hospital. Both jobs kept me very busy. Still, I did find time occasionally to work on my art, and since the hospital was in a rural area with long drive times, my ability to think outside the box came in handy on difficult emergency calls. I did this for ten years and was beginning to feel the first twinges of burnout—not unusual in the profession. As often happens in life, an opportunity to move back to Missoula arose, and I jumped at the chance.

During a random perusing of an adult education course book, a beginning wood carving class caught my eye. I knew some carving techniques, but what really piqued my interest was that the class was taught at A Carousel for Missoula, one of my favorite places. The course was taught by Dick Withycombe and John Thompson, and after the completion of the ten weeks, I joined the Ponykeepers, the volunteer force behind the Carousel. As time went on, John reintroduced me to stone carving when he invited us to the studio in his home to see what he was working on (if you ever get the chance to do this, jump on it—pretty amazing space). It was John’s enthusiasm for the stone carving symposiums that had me signing up for my first symposium at Silver Falls. 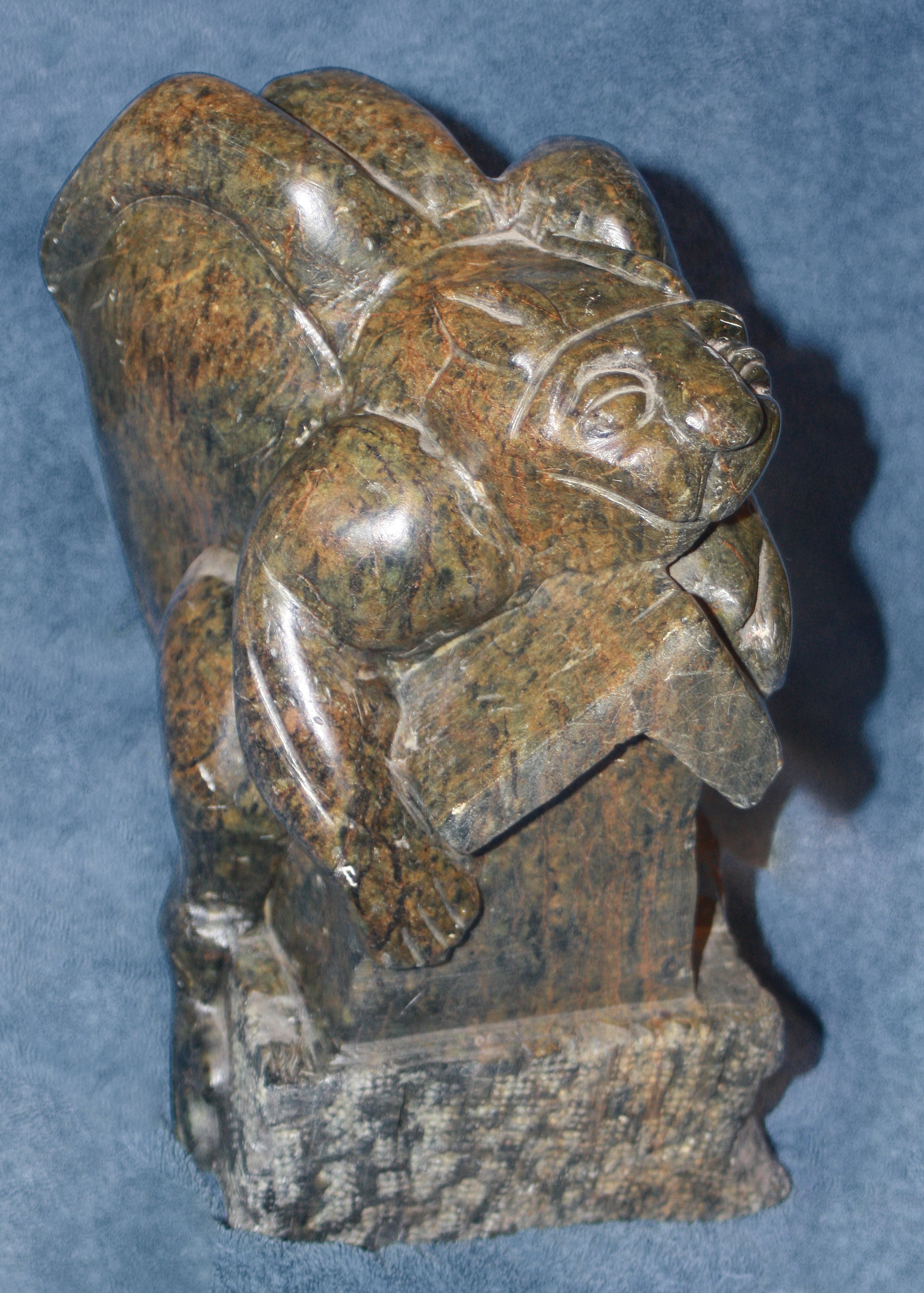 I did carve at that first symposium—honest, I did. But mostly I immersed myself in the senses of carving, reflecting back to that class in 1984. I watched others carve using so many techniques it was almost overwhelming. I learned the sounds a stone makes when it is nearing the breaking point during the splitting process. I smelled and tasted stone dust on a daily basis, and mostly I touched, feeling a variety of stone in various stages of carving. I became “hooked”. I even purchased a piece of soapstone, the first of many, to be carved at home in my backyard.

That first piece of soapstone became House Humper—a play on words from a TV program I would watch occasionally. (12x8x9 photo 1) I had no clear plan other than that I wanted a small grotesque. I just listened to the stone as it told me what it wanted to be. If I found a curve to be pleasing to sight or touch, I expanded upon it and moved on. The filing, rasping, and sanding process helped to bring out more of the form, and when I did the final polish using bee’s wax, the colors of the stone were much deeper and intense than the water test had shown. This piece was entirely handwork, and I still run my hands over it, feeling its essence and adding mine to its polish. It is important to me that people are able to touch my sculptures as I believe that they add to the work when they do. 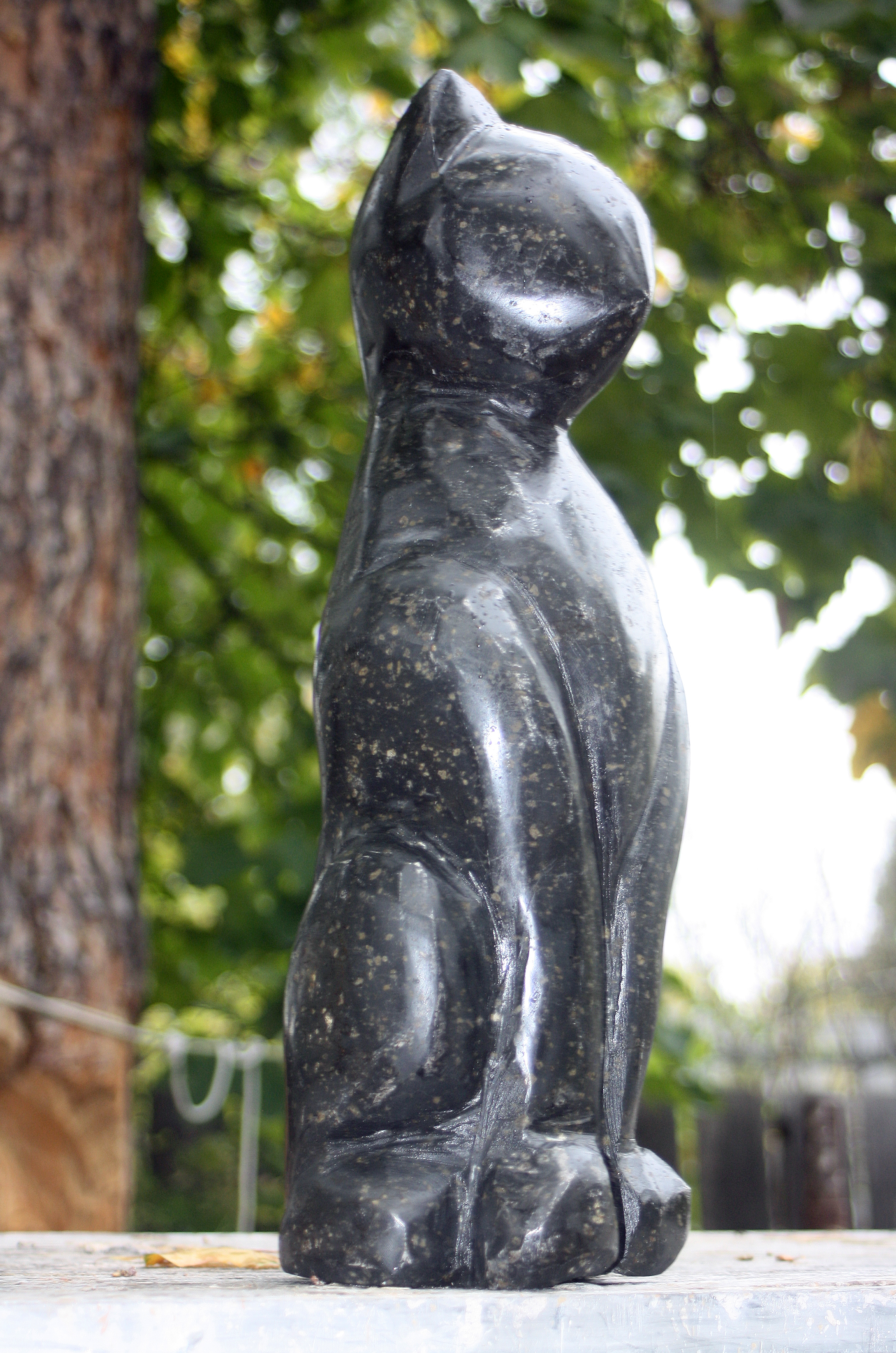 My next piece, Kitters—named by the present owner—(18x6x6) is a basalt crystal. Kitters declared himself when I was walking through a landscaping stone yard looking for a piece of basalt to test out my new diamond cutting/grinding blade and polishing pads. I used a 4.5" grinder to do all of the work, but the final buff was done by hand.

A Gift from the Sea-Shell (28x9x11) came about when I became enamored with the colors and patterns in a piece of Italian leopard marble I discovered on Tom Urban’s stone trailer. I sweated on this piece—quite literally. I used a myriad of tools, hand and powered, to bring out the shape the stone told me was within. As usual, the sanding and polishing process brought out far more color and nuances in the stone than I had observed in the back of the trailer, and at the finish of the project, so many people commented about how “hard that stone is”. Y’all couldn’t have warned me earlier? Still, I wouldn’t have done anything differently—it was a good stone to work with as I was healing from my heart surgery: A test to my resiliency. 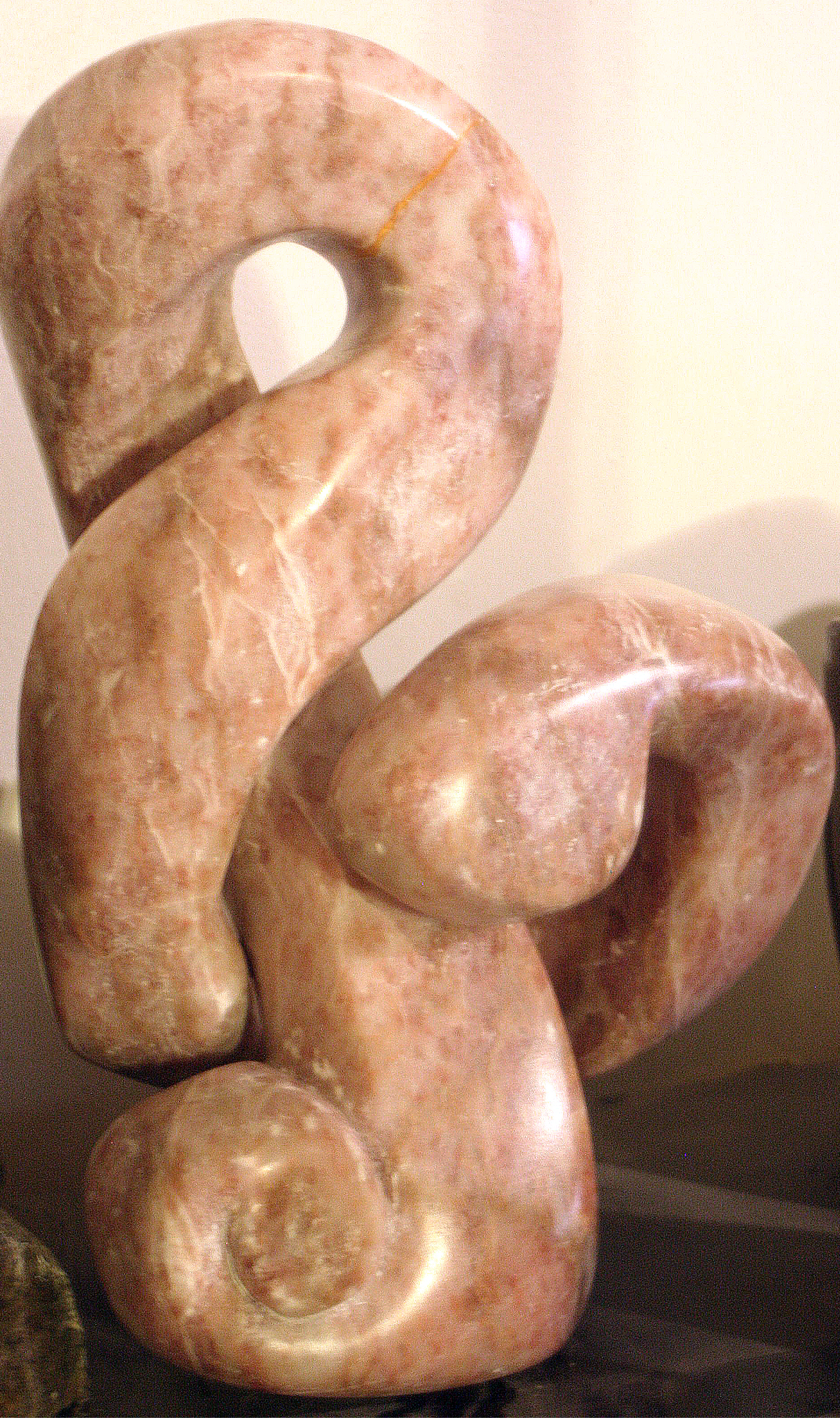 My most-recently completed piece is Imperfect Harmony (16x9x11). I had a piece of alabaster sitting amongst my stone pile. The shape of a treble clef in a mobius form kept invading my thoughts, so when it was time to go to the 2018 Suttle Lake symposium, I brought it along and got started. It was pretty slow going, mostly because I was fighting health issues. The incomplete form came home with me to finish. I had a sense of urgency to complete it before November, because I was looking at heart surgery. Maybe that’s why I wasn’t listening to the stone and when one tap broke it into three pieces, I put my hammer and chisel down, and walked away, leaving it on my carving table. There it remained, while I moved on to getting through the surgery and the recovery afterwards. I passed it several times a day, working on other projects. Recently however, it called to me, and the stone told me to get on with it. I decided to use kintsugi to complete it. I found some gold “dust” and mixed it into epoxy and fit the pieces back together. Once they set up, I was able to file, rasp, and sand the stone into its finished form. After I polished it, the gold seams are barely visible, but they are there, and I’m ok with that.

I look forward to the future. John Thompson and Adrian Hoye have opened a stone carving space. Perhaps one day I’ll be able to join them. I feed off the energy of other carvers, locally, and at NWSSA symposiums. It’s all part of the process— so much stone to carve, so many lessons to learn. 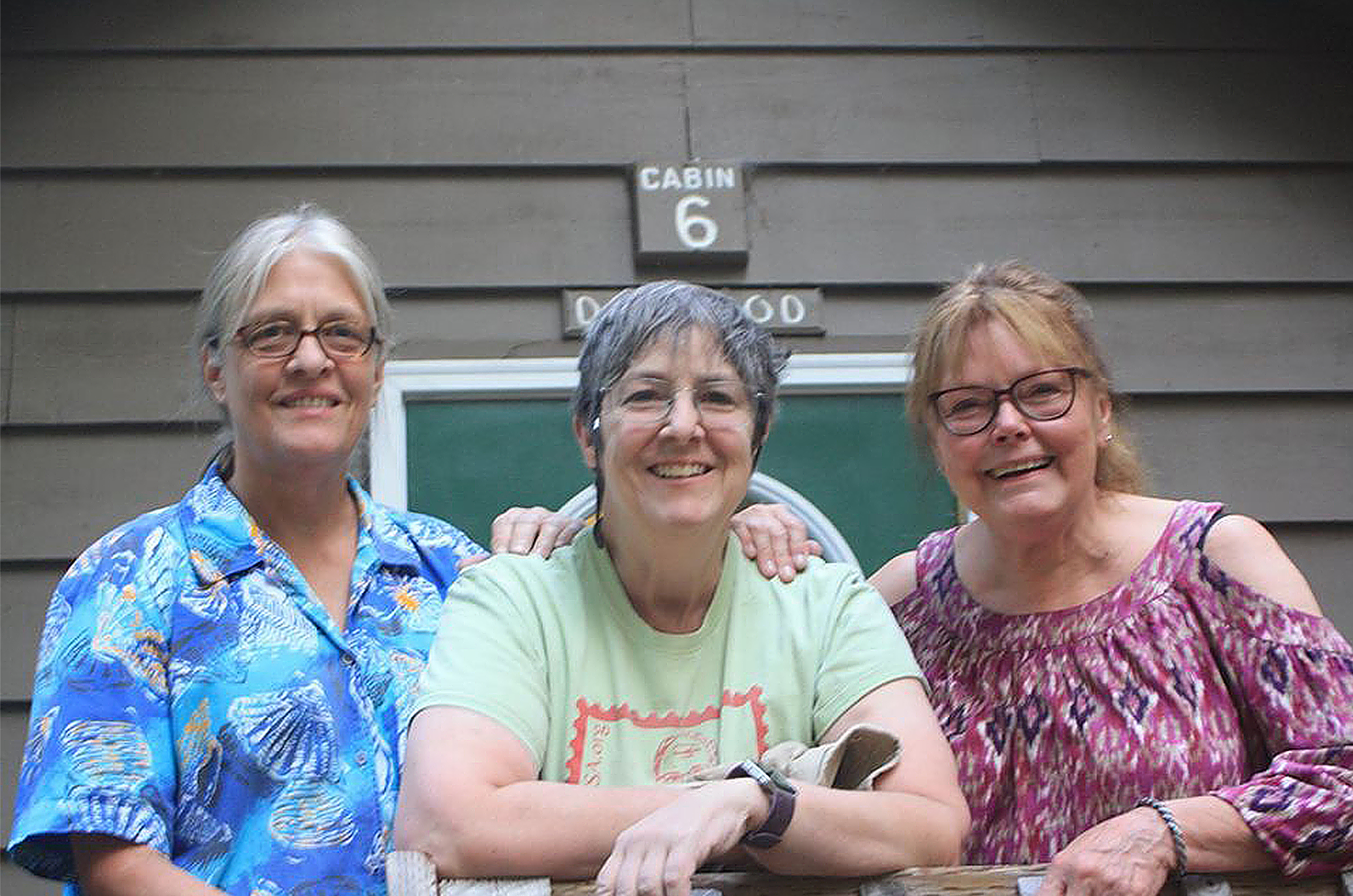 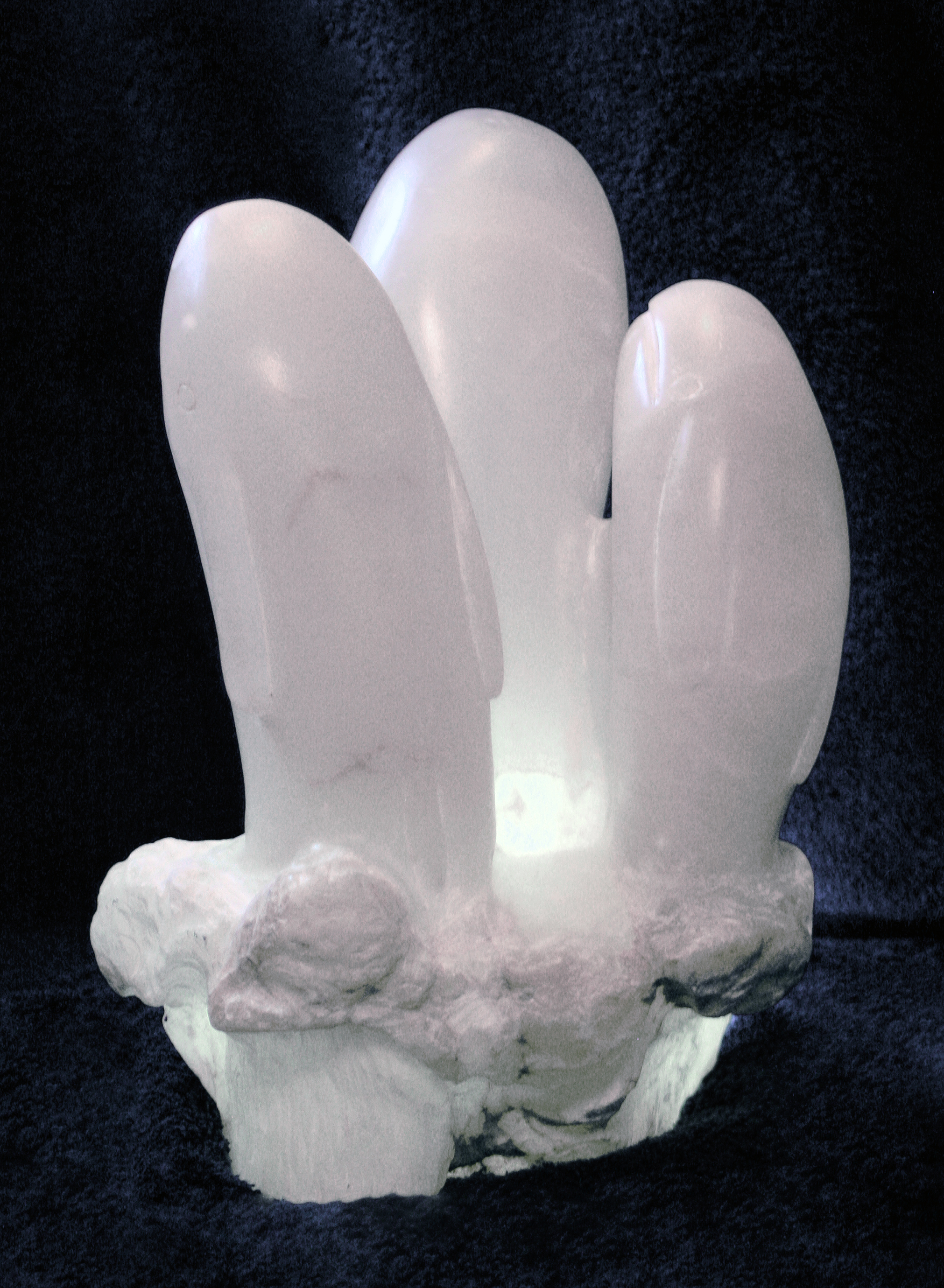