Bill Laprade of Seattle is a stone sculptor and geologist.  As a NWSSA Board Officer for four years, Bill helped shape the policies for many Association procedures and Symposia. This is the third publication of the Stone Column series, having begun  in January, 1993, with soapstone. This series continues to provide both veteran and neophytecarvers with information and useful insight into their treasured medium.

During a one year hiatus from The Stone Column to read and write about the interesting sculpture books that we all know and love, I have been repeatedly accosted (in a friendly way, of course) to resume the articles about the stone that we carve.

It’s hard to believe that it was several years ago when I wrote the first Stone Column about soapstone. So I have dusted it off, corrected the grammar, clarified syntax, thrown in some lessons learned since that time, and banged it all out on the machine.  In the issues to come, you will see revised versions of the other stone articles, and perhaps I’ll even sneak in a new one.

Soapstone has become universally used as a carving medium by beginners and experienced journeymen alike, as well as those sculptors who appreciate its ease of working and its brilliant finish.  It can be rapidly worked in detail with hand or power tools and can be brightly polished in beautiful hues. In its natural condition, it is earthy and mundane; one wonders why some sculptor first started to work this stone.

The geologic term for soapstone is talc or steatite; the two terms are synonymous.  Talc is the name that you will find in a book of minerals; however, steatite will commonly be listed in the description.  Reportedly, the term steatite was used commonly during World War II to describe massive and machinable talc that could be turned into strategic products such as insulators and metal molds.  There are many grades of soapstone, ranging from hard to soft and dense to flaky. Soapstone has a minimum of 20 percent talc, but can contain several subordinate minerals.

Talc is phyllosilicate, from the same class of minerals as the micas.   Technically, it is  Mg3Si4O10 (OH) 2,  hydrous magnesium silicate, with a specific gravity ranging from 2.58 to 2.83.Talc is the indicator mineral for a hardness of 1 on the Mohs Hardness Scale. This mineral has a greasy feel, and is a very poor conductor of electricity and heat, the reason it is used as an insulator. Minerals that commonly are found in association with soapstone are chlorite, serpentine, magnesite, antigorite, pyrite and enstatite.  Another mineral that is similar and can only be distinguished from talc by chemical or x-ray analysis is pyrophyllite, hydrous aluminum silicate.

Talc can be formed in two ways.  It is the product of alteration of other rocks and minerals; it has been metamorphosed.  It can be regionally altered dolomitic limestone or altered igneous rocks. Therefore, talc is commonly found in two different environments: massive deposits or veins.   The alteration from the original rock, such as olivine, to talc is made in a water-rich environment at moderate temperatures of about 1300 degrees F.  Commonly, the vehicle for the intrusion of water are shear zones along faults. 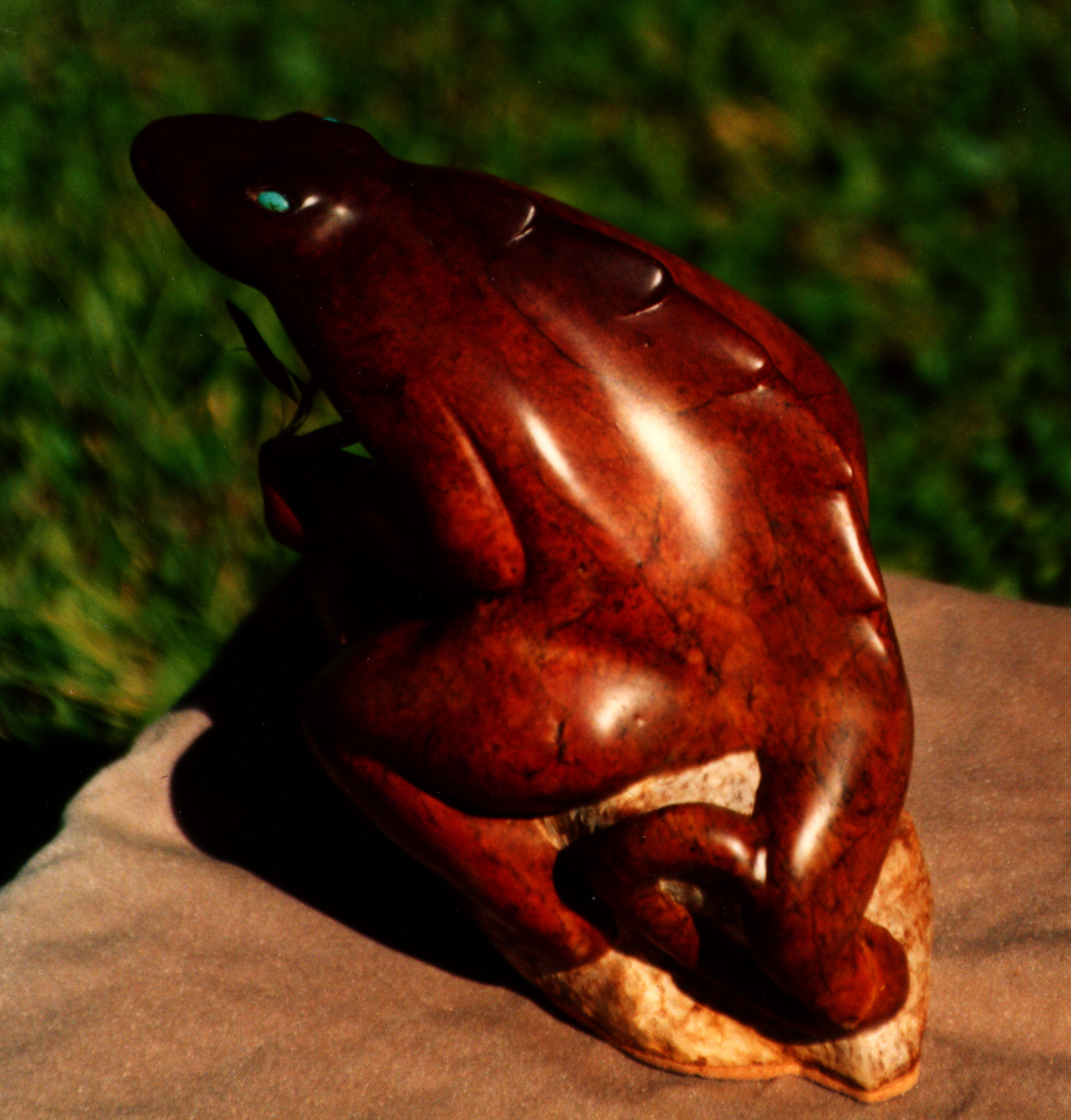 While the formation of talc is not a direct result of the movement, the travel of water along the zone of weakness completes the process. The largest of bodies of soapstone come from regional metamorphism (burial) of large deposits of dolomitic limestone, a calcium magnesium carbonate.
Some of the larger bodies of soapstone in the world are located in Ontario Province, New York, North Carolina, Georgia, California, Austria, Madras and Italy.  The smaller bodies tend to be narrow veins related to shear zones or igneous intrusions, and are commonly found in Washington, Virginia and California.

Colors vary considerably: buff, brown, gold, red, orange, black, green, blue, and black with white marbling.  Frequently, the outside of the rock may be red and this iron-oxide weathered zone will give way to another color on the interior of the stone.  In the Pacific Northwest, the most common colors tend to be buff, brown and green.

Soapstone is obtained in several ways, depending on the size and accessibility of the deposit.  One method with which many of those in the Northwest Stone Sculptors Association are familiar, is hunting for cobbles and boulders on the slopes of a landslide deposit near Lake Wenatchee.  (A commercial mining company now formally claims this deposit, so it is no longer open to us, but as of Oct. 2000, one of our members found another deposit, which is not on that claim.) The soapstone chunks are scattered about the landscape, and a shovel and crowbar are necessary tools to liberate them.  Sometimes small pieces can be found that are the right size to just toss in the back of the truck, whereas other larger behemoths must be cut in place with a bow or chain saw to gain a manageable piece.  Some of the larger boulders have soapstone on the outside, but then transition to another harder rock type on the interior.

In vein deposits, a backhoe is commonly used to loosen soapstone chunks, following the line of the vein. In the massive deposits or in very wide layers, the materials can be worked with a dozer and a backhoe together. It is common for the quarry operators to use the natural joints and weak planes in the formation to loosen the rock.  Each piece is then trimmed into sizes ranging from 5 to 1,000 pounds, using chain, band and bow saws. The waste materials from larger quarrying operations can be used for such things as cooking stones or foot warmers, and as additives in paint and cosmetics.

Is there asbestos in the soapstone that we chip and pulverize right in front of our faces? The answer is yes and no. Asbestiform laths are obvious in some of the soapstone that we see; however, the asbestos particles do not have to be visible to the naked eye or even magnifying glass to be harmful. It has been reported that roughly 40 to 50 percent of the soapstone contains some asbestos. The only way to know for sure is to have the stone tested by a laboratory. Soapstone from the Lake Wenatchee area and Marblemount also tested clean this year. However, one stone does not a quarry make; different parts of a quarry can contain different accessory minerals.  To be on the safe side, if you are not going to test each piece of stone that you work, treat the stone as if it does contain asbestos and wear appropriate breathing protection.

Soapstone can be worked with both hand and power tools.  The watchwords should probably be “Don’t break the tea cup with a sledge hammer”.  Tools used on soapstone should be appropriately suited and sized to this very soft rock.  The use of a large hammer or chisel can cause the unwanted splitting of the rock along an unnoticed plane of weakness.  It is preferable to be on the safe side by using smaller hand tools.  Because soapstone can usually be removed readily with rasps and rifflers, they should be used in the vicinity of a linear flaw.

Rasps, rifflers and then sandpaper are the orderly progression for the smoothing and polishing process.   Water should be liberally used during the sanding to aid in the polishing and to keep the pores of the wet/dry sandpaper unclogged.

It is common for there to be harder spots in the stone and even small pieces of iron pyrite. That will put a dent in your rasp!   On the other hand, there are reports of small voids in soapstone, perhaps from the weathering of sulfides.

An interesting development was reported in a 1992 edition of Sculpture Northwest by Patty McPhee regarding the firing of finished soapstone pieces to cone 4 (about 1,600 degrees F.). She reported that this process turned the soapstone pieces very hard and darkened them.  The firing increased the hardness from 1 to about 4 or 5. This could be a welcomed development to soapstone sculptors, but it is still experimental, as others have reported that the firing of soapstone has caused the destruction of a finished piece.

Thanks to sculptor Rich Baker of Ellensburg, Washington and to quarry operators John and Steve Pugh of Steatite of Southern Oregon, Inc. in Grants Pass, Oregon for sharing their knowledge and expertise of soapstone.