WOULD YOU LIKE TO EXHIBIT YOUR ART AT THE SCULPTURE FOREST?

There are many opportunities to show your art at Price Sculpture Forest. We encourage your participation. The park will provide you with excellent public exposure in a beautiful setting. We offer early phase participants 100% of your sales proceeds with no commission, to encourage inclusion of your best work and to support you as an artist. Check out the opportunities and submission guidelines below.

WHAT TYPES OF SCULPTURE LIVE IN THE FOREST?
INITIAL THEMES
The Sculpture Forest initially has two specific themes and some other guidelines which perform best in our jurying process. Future rotating shows will be more open ended. Each of the two overarching sculptural themes has its own devoted walking trail loop.

NATURE NURTURED
Representation of beauty in forms of natural elements, animals, plants, ecosystems, and human interaction with the non‐civilized world. Preference is for uplifting, positive messages and experiences (or neutral ones), though we will occasionally consider works that poetically evoke the dangers and implications of environmental degradation. Sculptures should be at home in a native forest setting.

WHIMSY WAY
Bring on the fun! This section of the park is devoted to releasing a sense of discovery. What will appear around the next turn of the trail? Will it make the grandparents laugh? Will it make the kids say “that’s really cool”? Is it unusual or beguiling in a relatable way? Is it fantastical or well outside the norm? These are all worthy ideas for Whimsy Way.

MATERIALS
There is a general preference for stone, some natural looking metals, and bio‐natural materials (wood, shells, antlers, etc.) in Nature Nurtured. In Whimsy Way, all materials, colors, and approaches are open ended. Sculptures should be sturdy to handle potentially appreciative hands and to hold up well in an outdoor year-round environment. 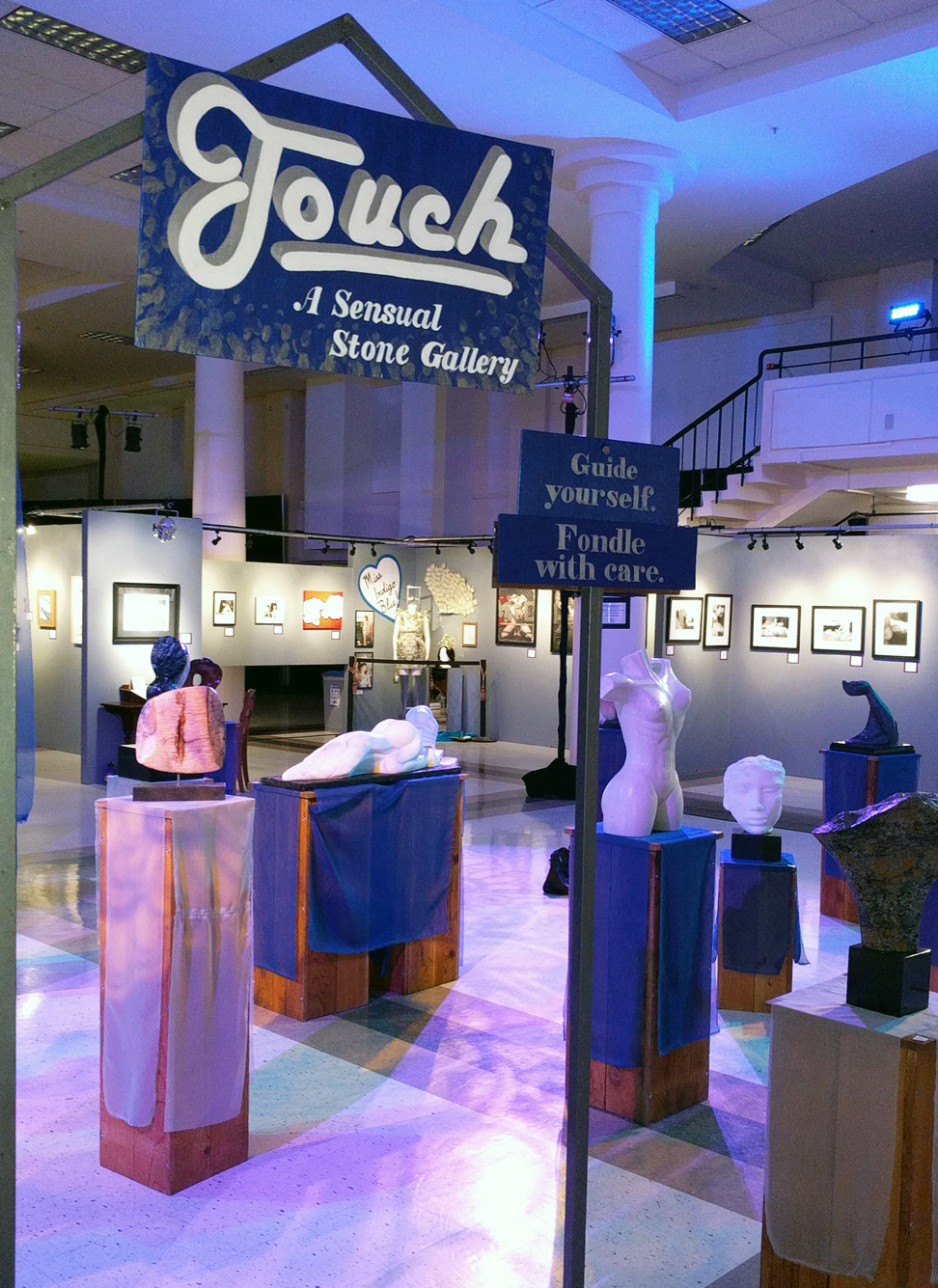 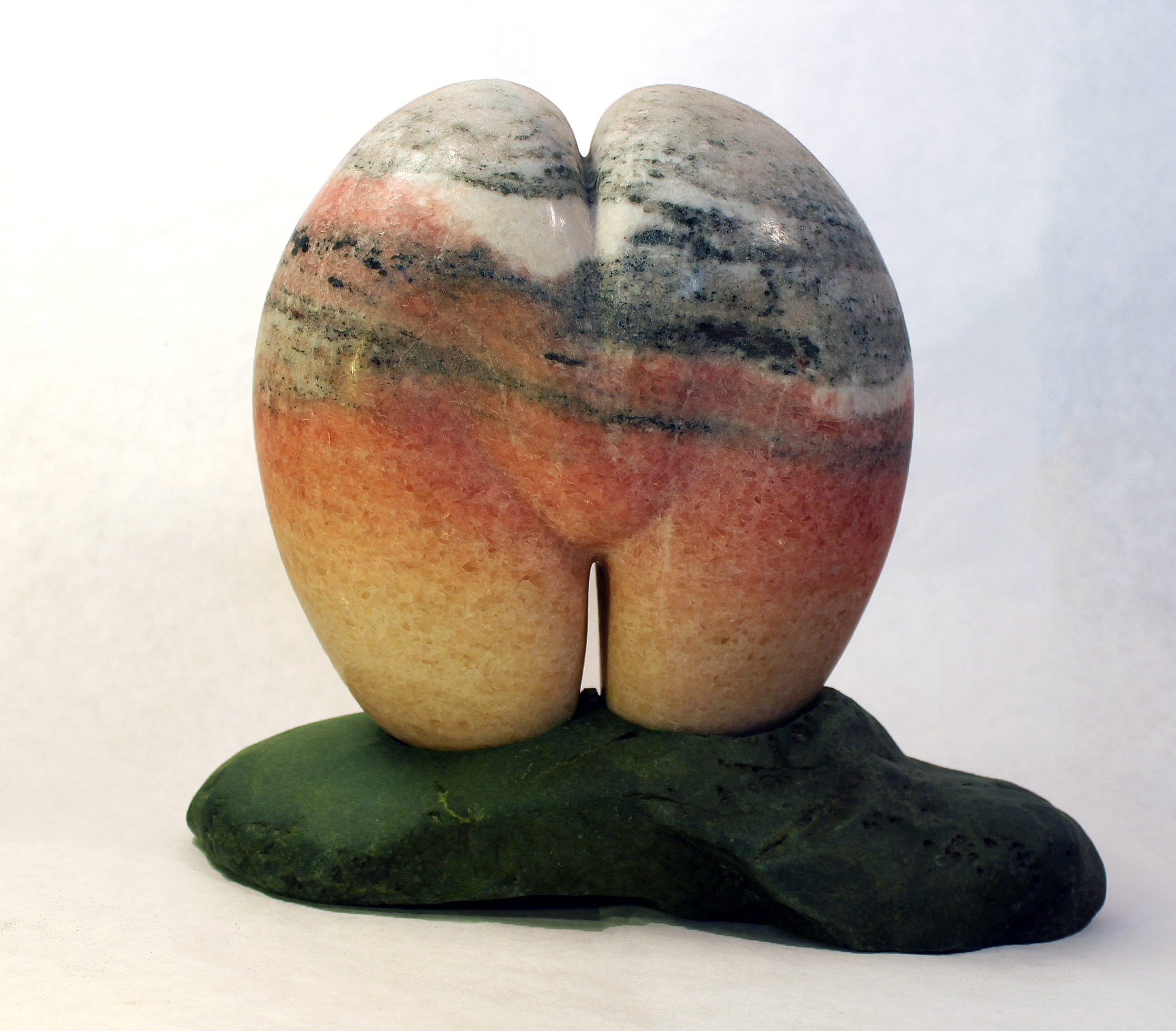 This curated gallery within the larger festival premiered in 2018 and featured 17 sculptures by NWSSA members Cyra, Markos Weiss, Sabah Al-Daher, Ben Kimura, Tom Francis, Julie Pitman, Ed Salerno, Steve Sandry, Steve Rabago, Wakey Nelson, Woody Morris, Bob Olander, Mark Andrew, and Jocelyne Dodier. Ed Salerno and Sarah Tanksley were instrumental in helping organize and run the gallery as festival viewers were invited to don blindfolds and explore the sculptures by touch, guided either by one of the artists or by someone they trust. Our part of the show was a huge hit! Thousands of people interacted with our artworks and the Touch Gallery was hands down one of the favorite installations that year at SEAF. The show resulted in at least one sale.

In its 17th year, SEAF has grown from an afternoon exhibit in Seattle’s Town Hall to a three-day extravaganza that attracts over 4,000 art lovers to view 300 works from local and international artists. In addition to the open gallery hours during the day, Friday and Saturday evenings feature lavish galas with music, performance art, and a thousand people each all dressed up, feeling good, and talking about the art surrounding them. While much of the work is explicit, much is also subtle, humorous, and sweetly sensual. You can find out more about the festival on their website: www.seattleerotic.org. This year SEAF will be April 24, 25, and 26th. 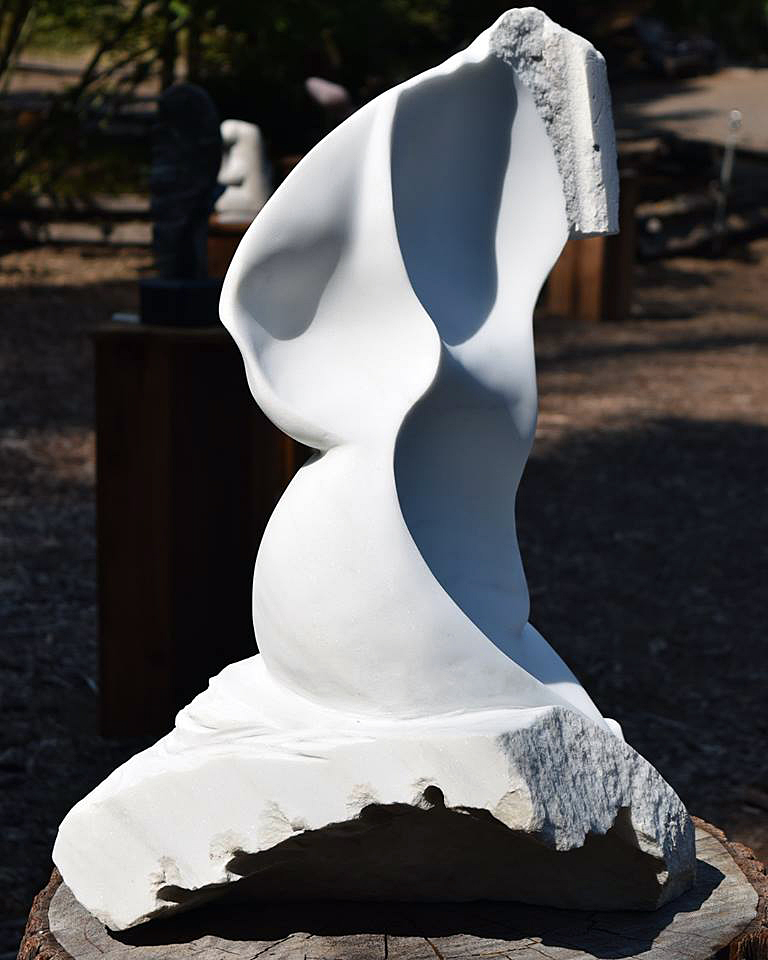 I’ve been attending SEAF since its first year, and it is one of my favorite events specifically because I’ve never seen another art show where people are so excited about the art and spend so much time with it. At the galas, most everyone spends hours circling the exhibits, picking out and voting on favorites, sharing their opinions and discussing artwork with both friends and strangers. In my history with SEAF, I’ve been part of a team of invited installation artists in 2010 (we won the People’s Choice award that year for our peek-a-boo dollhouse), a juried artist for marble works in 2016, and an invited installation artist with Touch in 2018. This year I’m officially a Guest Festival Curator and will be partially curating the Touch Gallery with NWSSA members and partially jurying from SEAF submitters. We are limited to 12 pieces this year, and I encourage you to be a part of this!

This is a call for the inclusion of public art collections in the Public Art Archive, an online database of public art. To be considered for inclusion, you must be a professional artist who has completed and installed public artwork, or an administrator of an established public art program. There is no charge to submit entries to the Public Art Archive. Public art is defined here as art that is situated in a location that is accessible or viewable by the general public and was, in most cases, commissioned by a public art entity, typically using percent-for-art or public funding. Gallery art and art exhibited inside galleries and museums is not eligible. Works of art that were commissioned and/or gifted by corporations, museums, educational institutions, private parties, and other entities may also be eligible. Permanently cited, temporary, new media, performative, rotating, and portable works may be eligible if they meet the commonly known definition of public art or civic art.

The Public Art Archive™ (PAA™), like CallforEntry.org™ (CaFE™), is powered by the Western States Arts Federation (WESTAF). The Western States Arts Federation is a nonprofit regional arts service organization dedicated to the development of an expanded awareness of the power of the arts. Much of the organization’s work is accomplished through the development of technologies that benefit the arts and the arts community. WESTAF created the PAA™, which launched in 2009 with the collections of a few pilot public art agencies. We are pleased to invite artists and collection managers to include their artworks on this premier database for public art.

Contact Email: This email address is being protected from spambots. You need JavaScript enabled to view it. 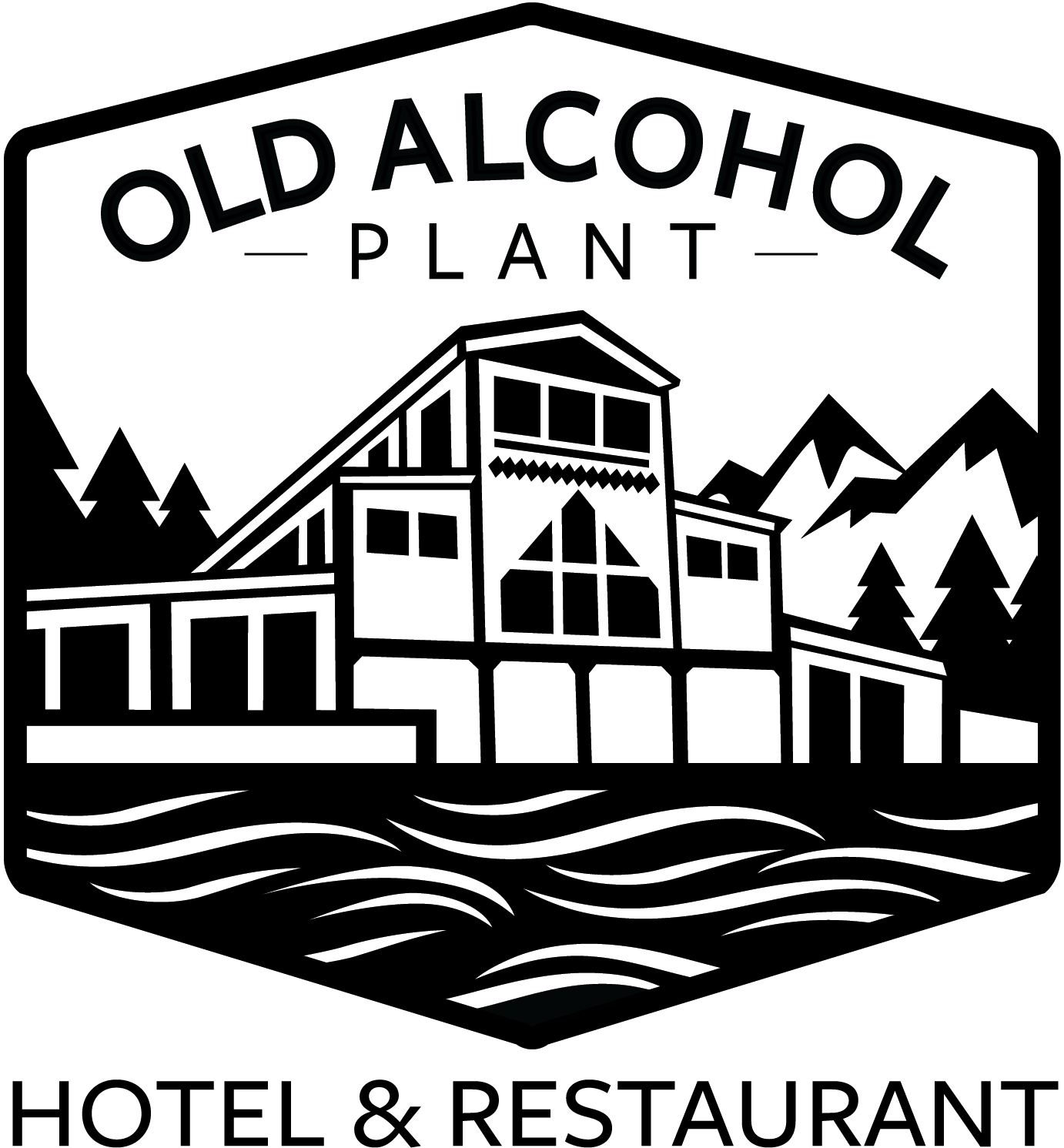 The owners of the Inn have created an opportunity for an on-going display of sculpture.

Sculptures not to exceed 100 lbs for ease of installation. Pedestals are supplied by the Inn.

In the main lobby near the Spirits Bar & Grill Restaurant, there is space for at least a dozen sculpture pieces on pedestals. There are 4 four-shelf glass showcases for smaller works in the gift shop area.

Sales commission is 40% which supports the Old Alcohol Plant Inn's mission to provide lodging for community members in need, create jobs to enhance our economy, and provide a beautiful waterfront location for events and classes.

To Apply online [Click HERE] otherwise download the application form, fill it in and email 2 pictures of each piece with size and dimensions.

As a means of fostering new interpretations of art and nature in urban spaces, the City of Shoreline Public Art Program seeks temporary artworks for display in parks (along trails, glades, meadows, and reclaimed gravel pits), especially Brugger’s Bog and Southwoods,

We always try to post current public art projects, artist fellowships, juried visual art competitions and exhibition opportunities that might appeal to our members. If you would like to make sure that a Call for Artists opportunity appears on our website, please email This email address is being protected from spambots. You need JavaScript enabled to view it.

The following are links to helpful sites with information, resources more calls for artists in all disciplines:

Here is a link to the Artist Trust site:  http://artisttrust.org

Here is a link to CaFE site which serves as an aggregator for artist calls:  www.callforentry.org

Here is a link to the Regional Arts & Culture Council: RACC.org