Editors’ note: Carlo A. Dondero came to America as a boy with his Italian parents. By 1858, he owned a print shop at 417 Clay St San Francisco. Soon thereafter he bought the quarry land from a distant relative of Eddie Oneto’s and in SF he met Leland Stanford who put up $50,000 to open up the quarry.
Off and on from the 1880’s through the l920’s the stone was shipped to Fisherman’s Wharf in San Francisco where the Musto marble company cut and polished it for buildings in the City. Some of it was used on the museum building at Stanford University. The quarry has been virtually unused for the last 80 years.
By Matt Auvinen


Through the network of the NWSSA emails I heard that Eddie Oneto, having bought the property, was hoping to introduce his forgotten marble to the world. Eddie had recently widened the old road to an abandoned marble quarry on his property. He pulled out some blocks that had been split from the mountain by the Italian workers and left behind a hundred years ago. Eddie kindly sent me some pictures and I was immediately curious about how useful this material might be for our carving community. After a couple phone conversations Eddie invited me to Jackson to visit the old quarry site.

Just off of HWY 55, Eddie has a beautiful ranch a few miles from Jackson, CA. The drive just east of Sacramento offers some of the most idyllic views of the foothills that lead to the Sierra Nevada Mountains. As I drove up to the ranch house I saw that Eddie had already prepared his ATV in a trailer behind his pickup. He was cordial and generous with his time as we discussed the old quarry.

The drive to the quarry took us through several winding tree lined roads until we had to unload the ATV to drive the final mile on a single lane gravel path to the quarry. From the narrow and tree shaded path a light grey monolith of stone appeared in stark contrast to the pines and underbrush. Most apparent on the stone wall were the parallel drill marks spaced at 3 inch intervals where the blocks were split from the marble outcropping.

We loaded several small pieces into the RTV and I took these home to Chico. The next day I carved a simple capital with curved surfaces. The marble has large crystals that resemble Greek marble. There are extensive dark grey veins throughout the material with occasional straight brown veins. Small oval pockets of very translucent calcium carbonate can be found as well as very hard dark quartz crystals. This material will hold an edge from a grinder and takes a good polish. 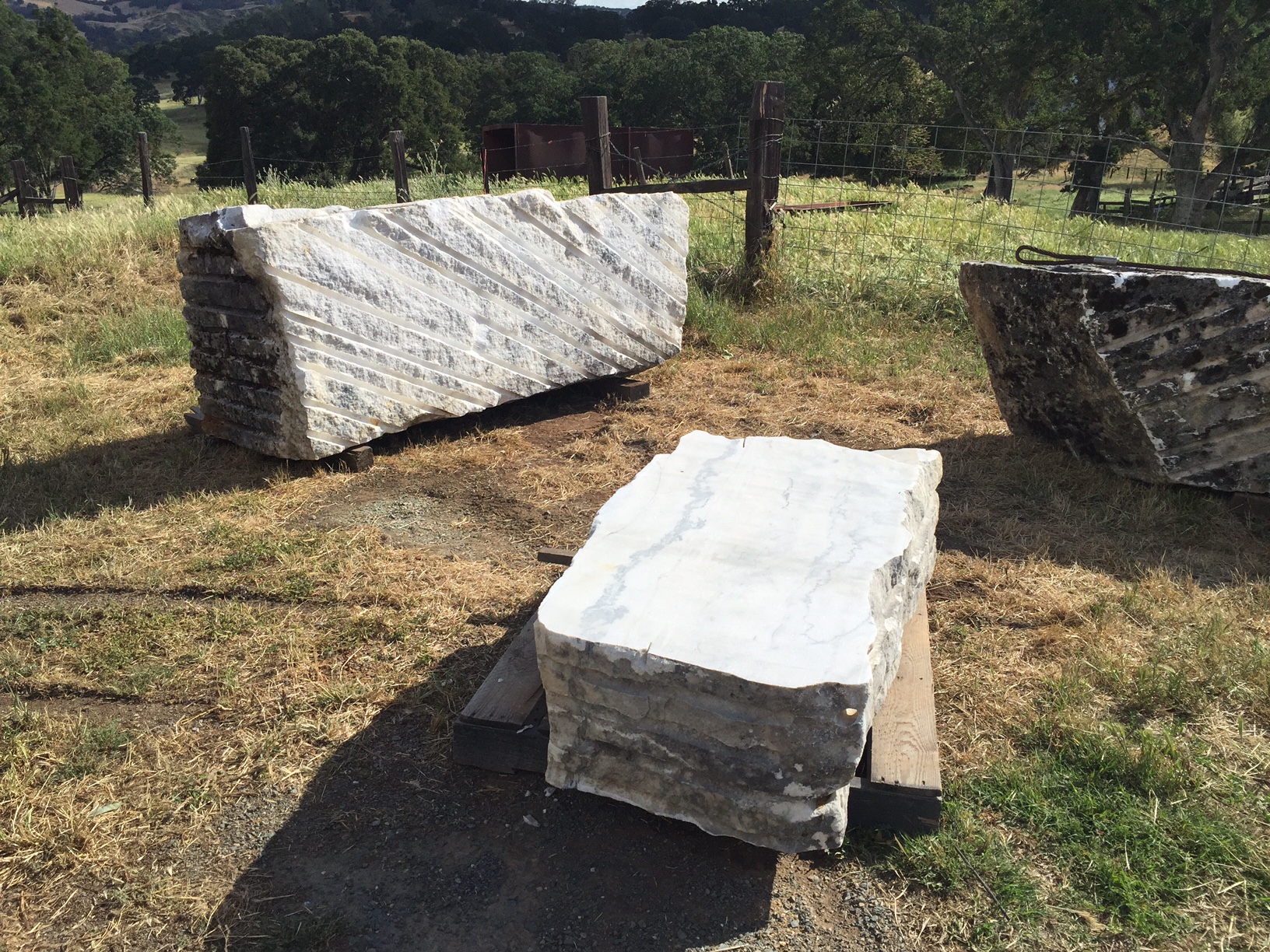 After the quarry visit, and after some discussion about the future of this marble, Eddie decided to organize a BBQ and "splitting party. For a fee of $200; participants were offered a tour of the abandoned quarry, a lunch and steak dinner, and a minimum 200 lb. block of this rare Californian marble. 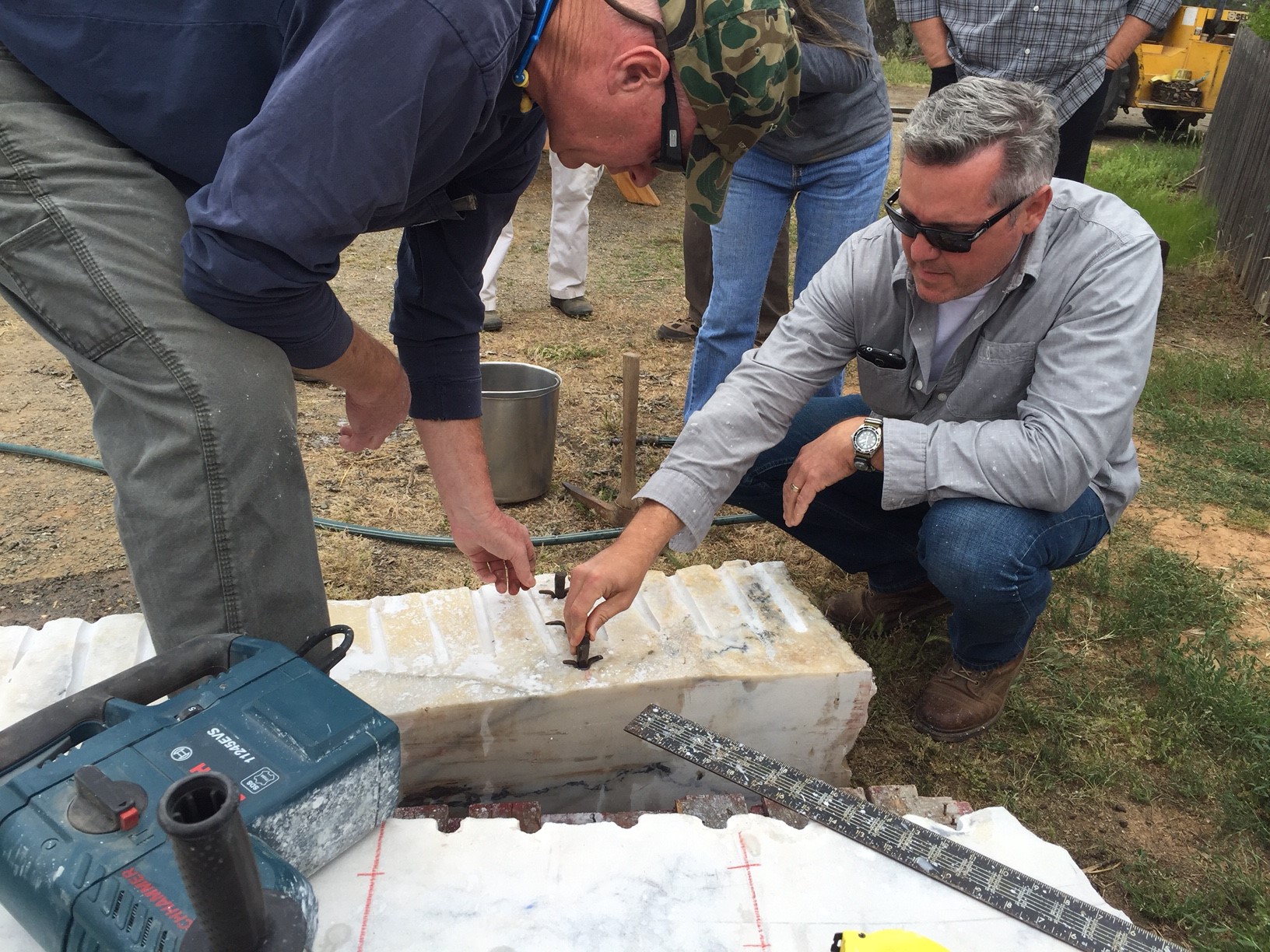 Fifteen stone carvers showed up for the festivities from all over the west coast. The generous spirit and friendly atmosphere was just what I was accustomed to from attending all of the stone carving symposiums in Washington, Oregon and California.

As part of the entertainment Eddie asked me to demonstrate some old tools and techniques for carving stone. I showed how the pointed and toothed hammers were used in antiquity to flatten rough surfaces as well as some point chisels that were recovered from old quarries in Carrara, Italy.