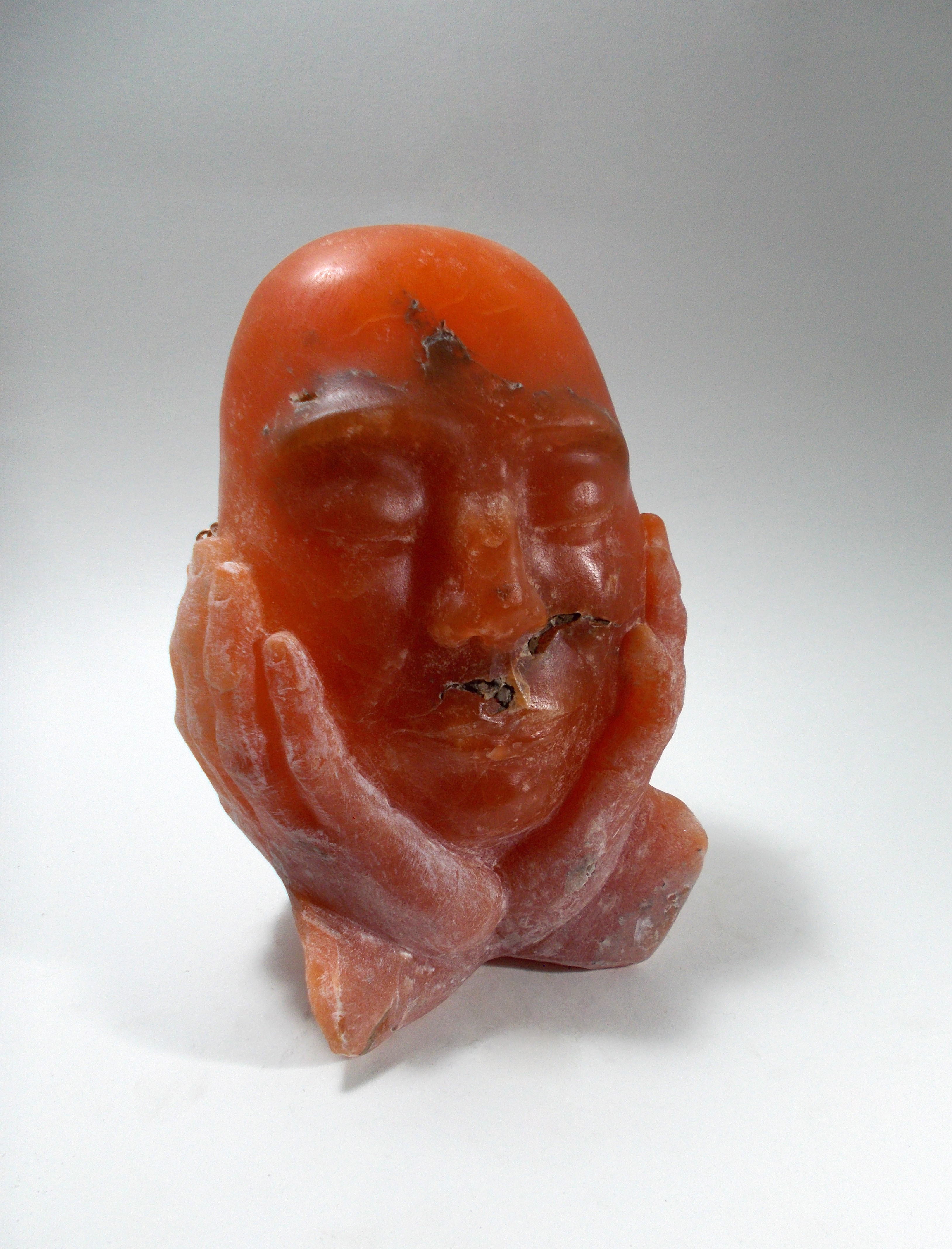 Sadly, it wasn't until age forty-nine that I discovered sculpting at a community college in Salem, Oregon. The beginner’s dilemma was to then find stone and tools. When an artist at a local show said he collected his stone and made his tools, I married him! We just celebrated our twenty-fourth anniversary.

Starting with river stone, sandstone, soapstone, and desert pumice, I used hand tools, later adding angle grinder, die grinder and Dremel. Even though I lusted for speed, pneumatic noise shredded any sense of bliss when carving so I didn't go there. I've never had any agenda or direction but to carve what I see in the stone, learning something every time. My first lesson: I don't care for shiny finishes.

Fortuitously stumbling across the first NWSSA Symposium at Silver Falls, Oregon, I was transported, volunteering several years to help run it, too. During a week of exposure to stone, power and upscale hand tools, and some of the most giving, sharing people in the art world, I used rubble from artists working on large pieces to start learning attributes of sophisticated stone. Lesson: A maquette is invaluable, and I've mostly stuck with that process since.

Alongside stone, time was spent carving the Riverfront Carousel wooden horses and five wooden figures for the Mt. Angel Glockenspiel and the Abbey Nunnery, and sculpting clay tiles.
Lessons:
1) I can and will carve wood—money helps.
2) Clay is instant gratification and squeezes easily into the frantic pace of life.
3) Public art becomes part of the fabric of its surroundings.

My first exhibit was at NWSSA's beautiful 1999 show at the Oregon capital, where I was chagrined by the tittering over a nude, but heartened to hear, "I don't understand this art, but I appreciate what it took to do it." Setting up the show, some female sculptors couldn't lift their art onto pedestals. Lesson: Only carve stone I can lift.

Now seventy-three, after years of symposiums and carving for pleasure, I'm questioning how to continue. Small stones? More clay? Sculpture is inherent in my life and has served me well, especially as a focus in the last nine months during and after four heart surgeries. Life is meant to be lived, but there's nothing's carved in stone (sorry) as to how one does that. I shall adapt and continue, tools in hand, because to quote Diane Ackerman in A Natural History of the Senses, "It is the province of art to throw buckets of light into the shadows and make life new again."

EVE. Pink ribbon alabaster. 6"x3.5"x3.5". First sophisticated stone I carved. Finished and washing off the white dust, I was horrified by the large ribbon pattern that looked like rosacea! Plus a black streak under her nose was like a mustache. I carved deeper, removing the black, opening her mouth, working the Dremel blindly to feel teeth in puddles of stone dust. Then, sitting flat, the finished face disappeared when direct light filled all crevices. Lessons: 1) Consider the stone pattern for your subject. 2) Carve so shadows define the sculpture as it finally sits 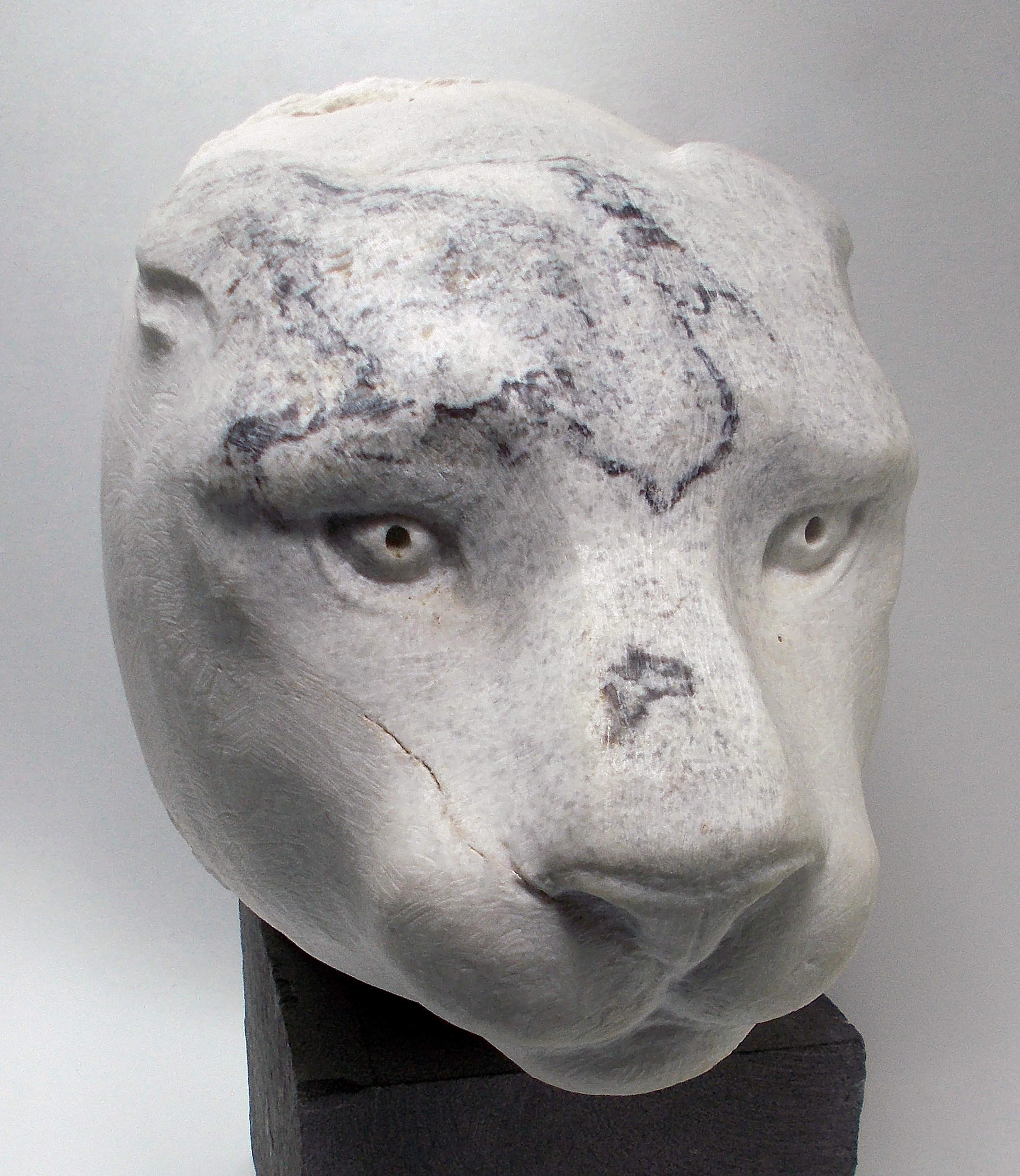 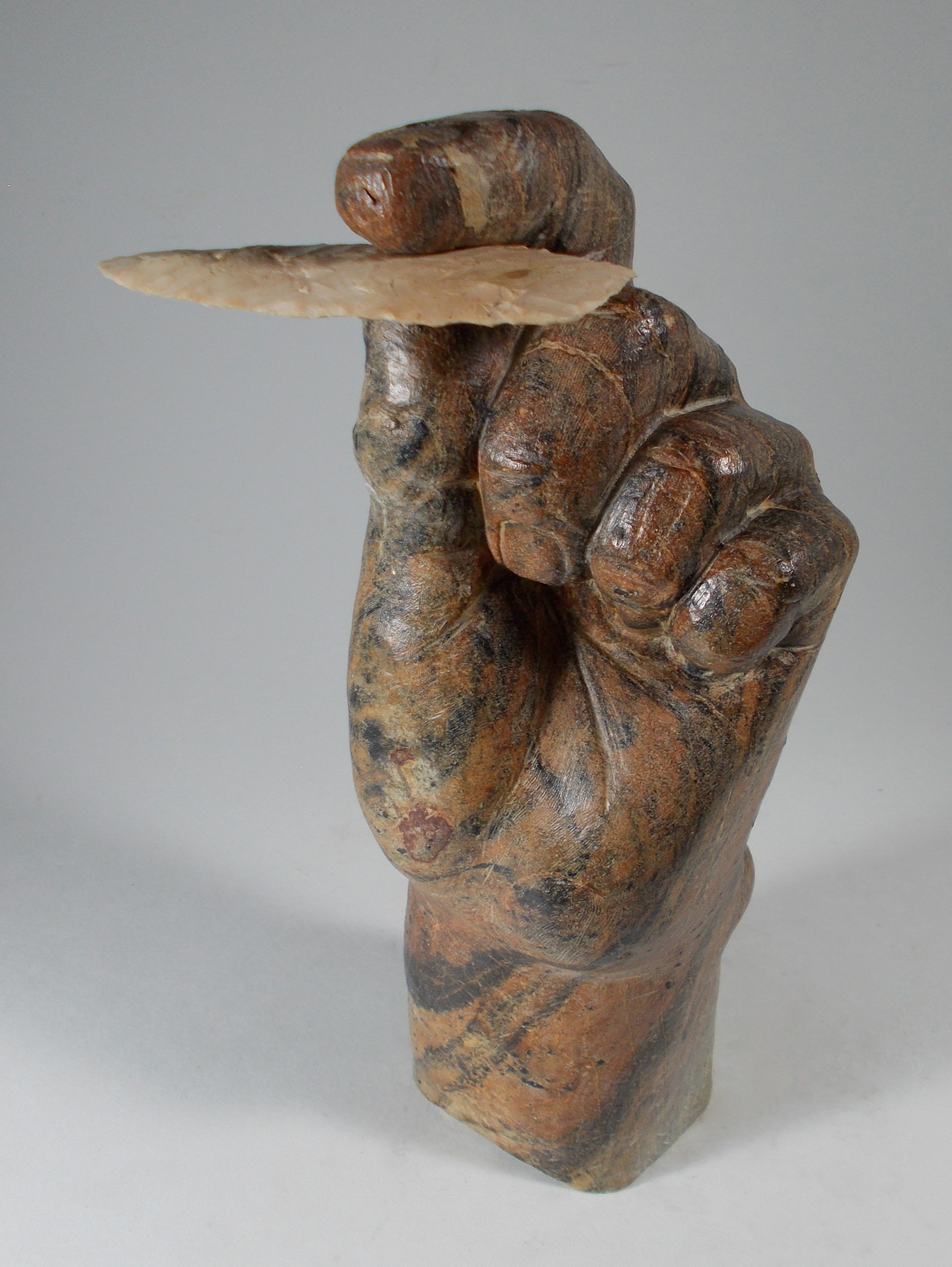 ECHOES. Soapstone and Burlington chert. 3"x9"x2". Carving open the gap, the end of the finger fell off. I mixed glue and powdered stone and attached and detailed it. I pinched (sorry) one of my husbands’ knapped projectile points to complete it. Lesson: Less is better. It was less garish before coating with 511 and wax.

OLD MARRIED WOMAN. Oregon desert pumice. 9"x10"x9.5". Carved on the tailgate during a too-long camping trip (the need was too great to thwart!), the male face jumped out of the stone. It took years to finish. It's intensely personal with the fitting title, Old Married Woman, which I was at that point. She's large to carry the male and every aspect of his personality like a second skin. She is soft focus, he is clear and unmistakable. I realized I needed to cast my own shadow again. Lesson: Your sculptures can teach you something about yourself.

REFLECTION. Oregon desert pumice. 9"x7.5".7". I wanted a female face that wasn't classically pretty, adding a sculpture on the back of a seated woman looking at her reflection in a bowl of water. It was a gift to the Women's Shelter but they shared a tiny office with no place to sit anything. Lesson: Carve it anyway. 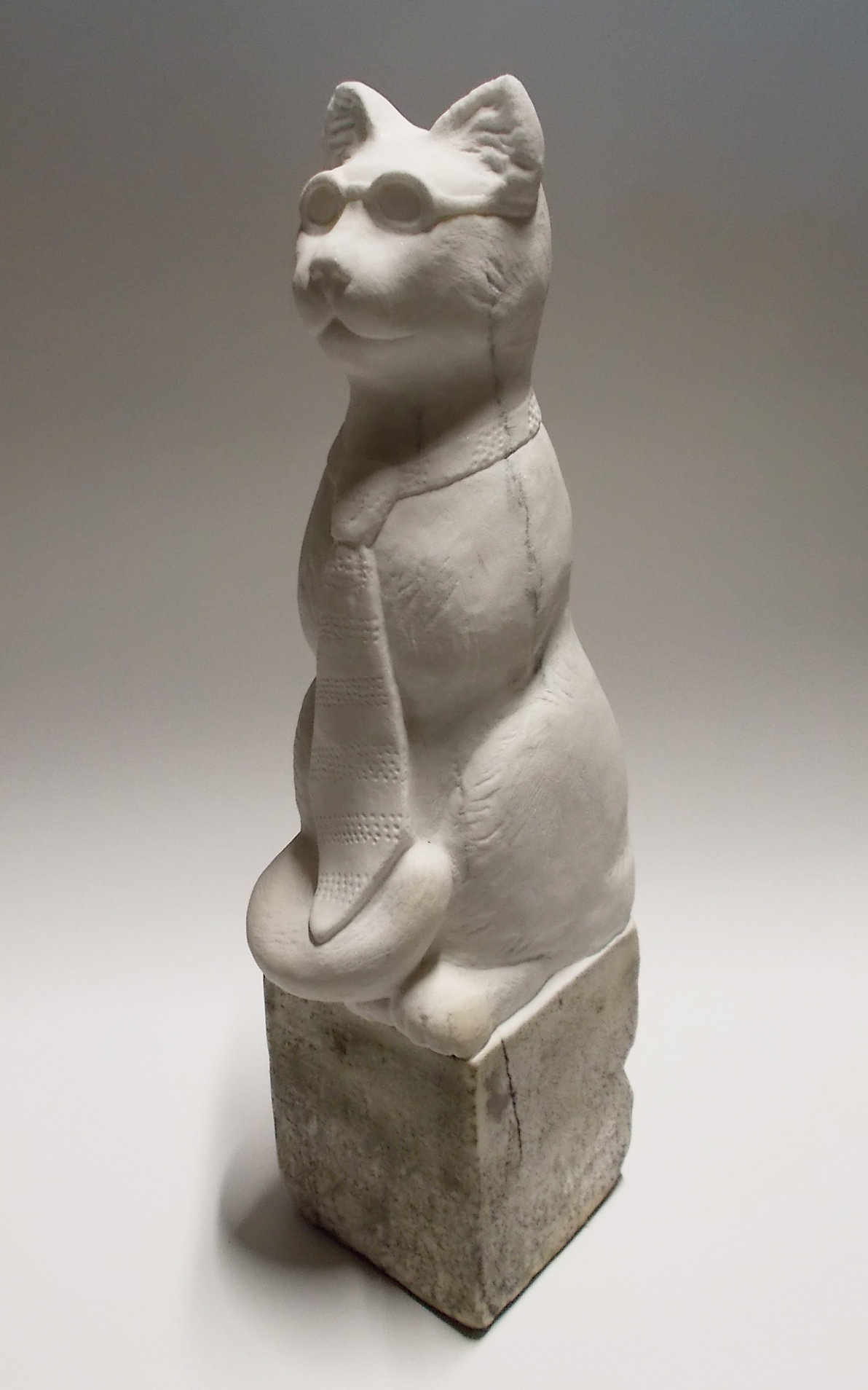 The most fun I've had carving! Blanche was the result of removing all straight lines and using one huge curve. The Librarian's cross had a broken arm so I turned it upside down, leaving the rind on the base to honor what the sculpture had been. Lesson: Images can be powerful. The original cross evoked strong reactions: an artist exclaiming, "But it's a cross!"; a pagan delighted that two crosses would cease to exist; an eighty-one-year-old instantly furious [mistakenly] believing that we robbed graves! 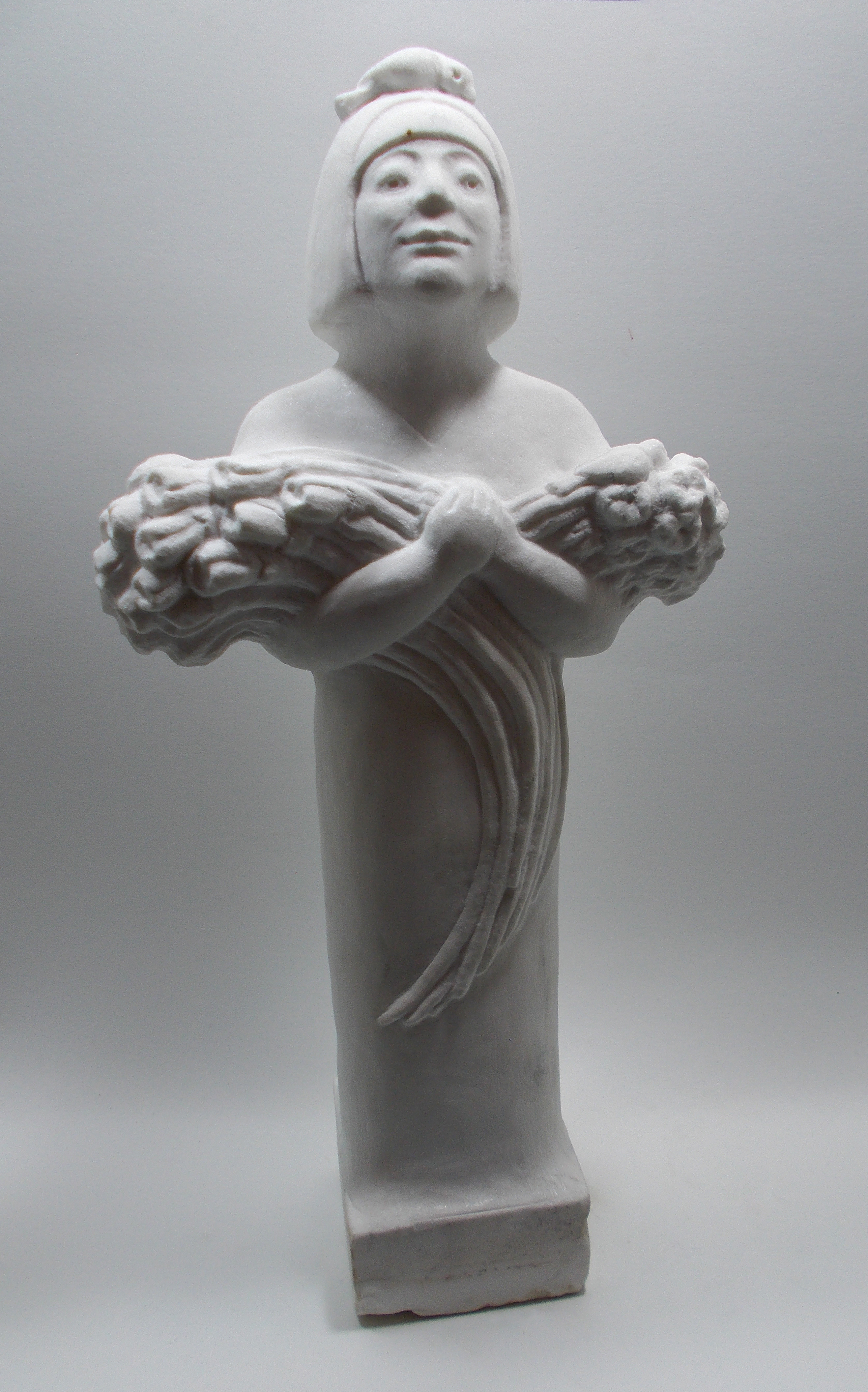 UNTITLED. Sandstone, mudstone, leather, beads, feather. 4"x17"x5". I wanted to try sandstone, and I needed a hat stand. The style is raw and blocky. Lesson: I know why ancient monuments still exist. The symposium blacksmith sharpened my chisels 3 times that week.

MASK. Orange alabaster. 7"x9"x4.5". The face is a mask (the thumbs wrap around back), so I waxed the mask and left the sculptor’s hands dusty. An instructor, (since deceased, so it's no one reading this,) demonstrated that this stone rang clearly, indicating "no inclusions", but it's a hot mess! The inclusions kept the stone from being too precious though. Lesson: Learn from instructors’ mistakes.

RIP VAN WINKLE. Oregon desert pumice. 10"x12x6". A face-study destined for the garden where nature had its way.

HOLLY WOOD. Colorado marble. 3"x21"x3". Unrealistic, out-of-proportion female on a thin, rocky foundation. I drew a linear, svelte, sexy figure but my hands carved this realistic version. It's the first time a sculpture won't go where I want. Lesson: I should have made a maquette!