Hi, Pat. Can you tell us a little bit about yourself? 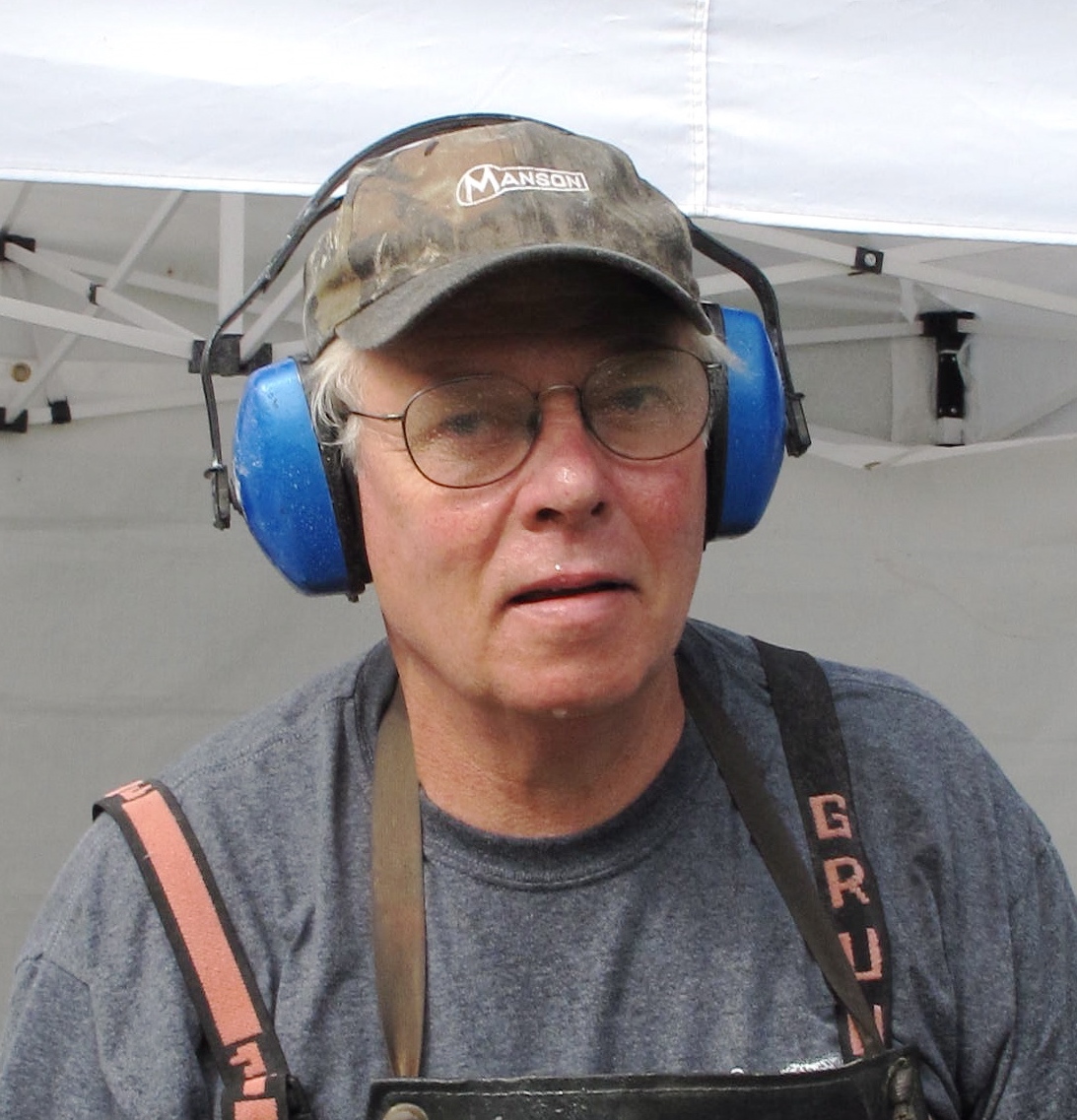 I lived and grew up on a dairy farm in South Prairie, Washington, not far from Buckley, or Enumclaw. My mother, sister and I took care of 60 milk cows. My father commuted to and worked in Seattle, he worked on the farm on weekends. We had 140 acres of pastures and timber. I spent many hours exploring the forested areas where I lived. In junior high school I went to the old Wilkeson School, which is made from Wilkeson sandstone. I even visited, with my mother, the sandstone quarry when it was working. The hoists up the hill, the huge gang saw, and the workers in the sheds are things that I still remember.

What is your life history as it relates to being an artist?

I became interested in stone and rocks when I was a teenager. Thanks to my sister-in-law, I trained in lapidary and polishing stone with a professional lapidary in Rainier Valley, Seattle. That was 1962. After graduating from High School, I studied and received a degree in Geology. While in college I also took classes in art and photography. I continued my lapidary work, off and on for the next 40 years. In the 1970's, I lived in Roslyn, WA, made salt fired ceramics, and worked at an iron foundry. During the winter an artist friend and I made and poured bronze pieces. From Roslyn, I moved to the Seattle area, and worked on Lake Washington building rock bulkheads, fancy stairs, rock work and residential piers for the lake-front home owners. In 1980, I went to work as a pile driver for Manson Construction in Seattle and worked on floating derrick barges doing marine construction for 25 years. During those years I worked on most of the ferry landings and most of the port docks in Puget Sound and the San Juans. When I retired I was the General Superintendent for the Thea Foss Waterway Cleanup in Tacoma, an EPA Super Fund site. 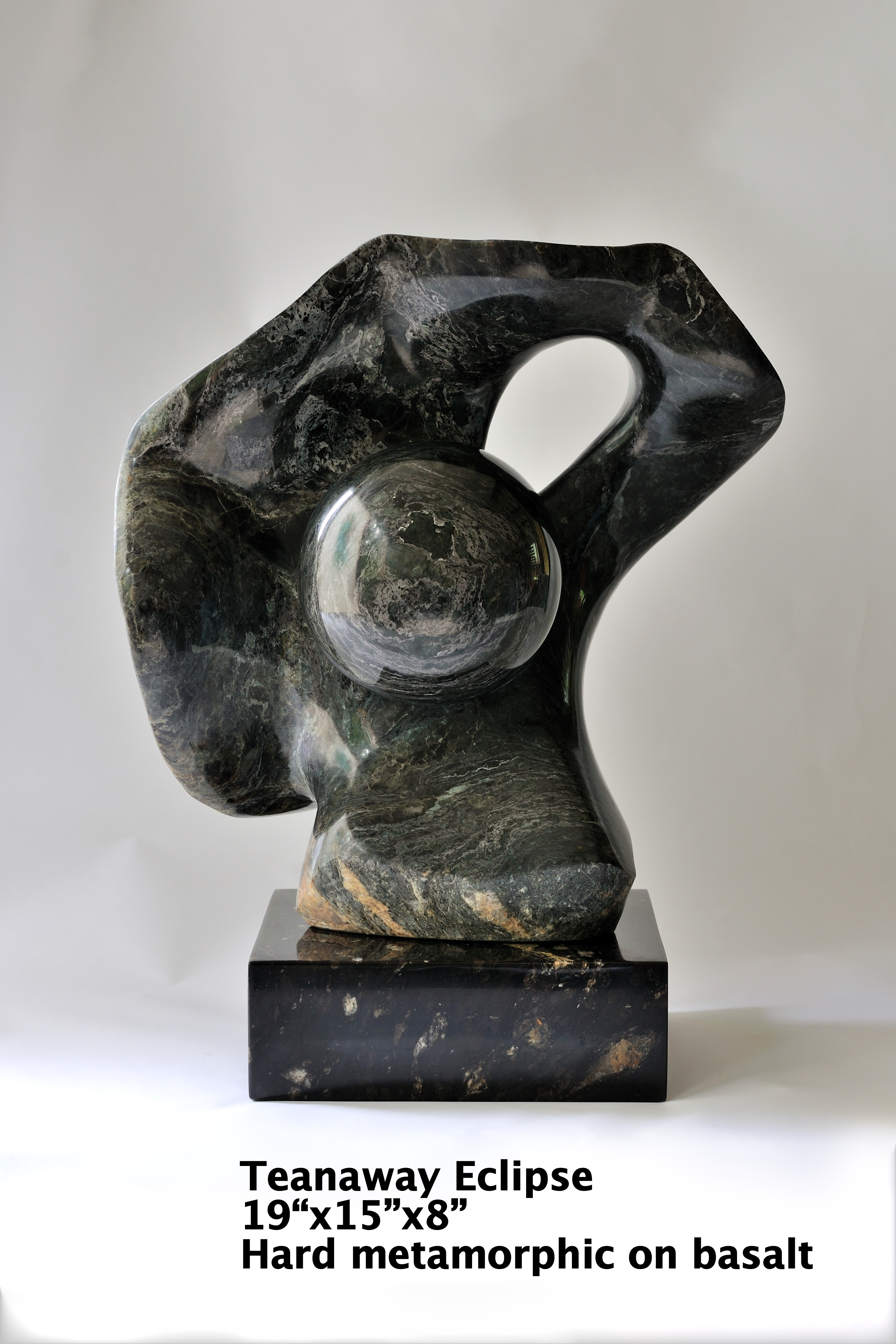 Why did you become an artist?

We are all artists. Our eyes just need to be opened. When I was working, 50 hour weeks, in Tacoma on the clean-up job, I was also making stone planters, vases and other stone things that I sold at the Salmon Days Festival in Issaquah. One time, when I came back to work the Monday after Salmon Days, the head city engineer for the project asked me why I took the weekend off to sell my stuff. I replied; when was the last time you had 1000 people compliment your work in one day? I didn't tell him about the 20,000 that just walked by.

What has influenced your art?

Fifteen years ago I started making stone planters, vases, and other stone objects. Many of these were made from natural river rocks that I collected. As I continued making these, I refined my eye for the forms that worked and those that didn't. I learned a lot from shaping small basalt columns, and flaking obsidian to improve the form and texture. I have probably made 8000 of these objects, most sell, some don't, and the customers tell you what is ok and what knocks their socks off. I have learned so much from the interaction with all of the people that have viewed my stuff, and it has aesthetically influenced my art.

How does your art reflect your philosophy? 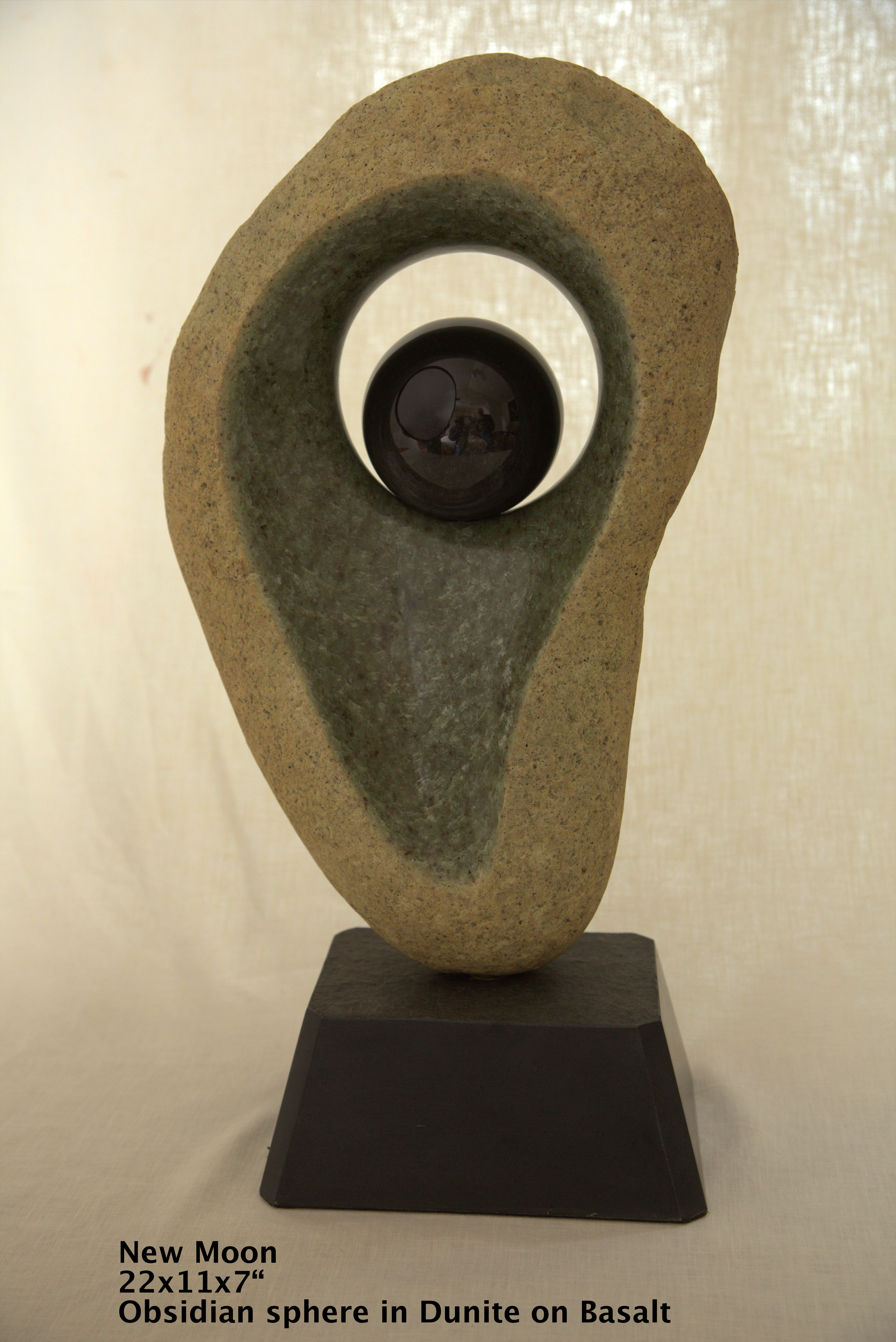 Sharing is something that is an important part of my being, whether it's sharing my art and its forms, or sharing my knowledge of tools and techniques. I have found that others return the sharing. For me this is a good philosophy to live by.

How has NWSSA influenced your work as an artist?

NWSSA has had a huge influence on my art. At the symposiums I have learned style, form and technique from an open and generous community of artists.

How do you get your ideas?

I get my ideas from conscious, and some subconscious, mental images. I draw from experiences and images from the past and present. During the sanding and polishing process on a hard stone you have ample time to come up with ideas. If that stone is jade you have extra time. 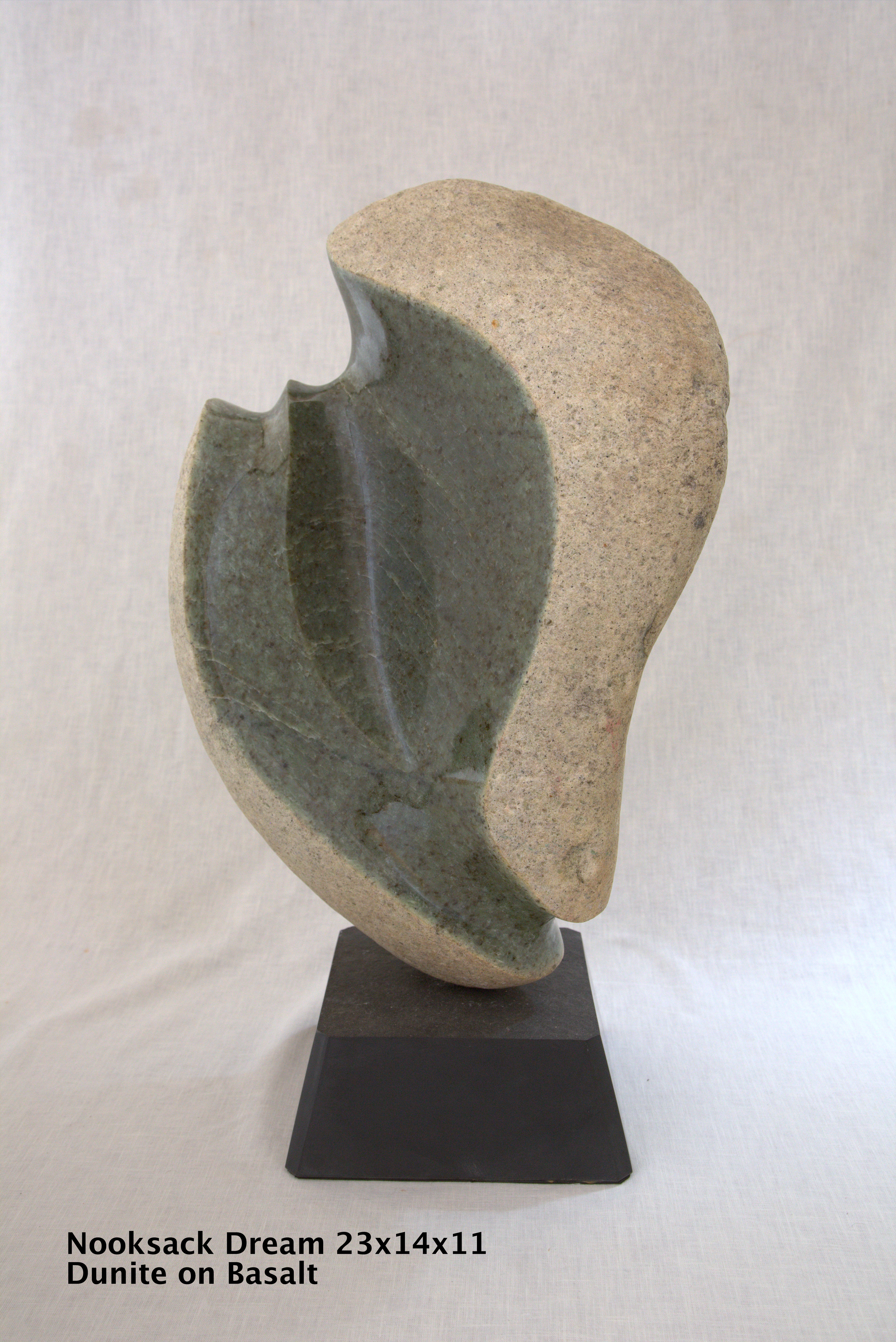 How do you develop them (by direct carving, drawing, modeling, etc.)?

For the most part, I direct carve. Sometimes, I sketch out designs in a journal and use them later, sometimes I just draw on the stone. Sometimes I write notes on the outer wall of my carving cubicle, mostly done while polishing.

What is the source of inspiration of your forms, language, or imagery?

Forms in Nature and the inter beauty of the hard stones that I carve allow for wonderful contrasts of rough organic surfaces to highly polished surfaces that show the interior beauty of the stone. Most people like to see what is inside that rough old stone. The dunite with its golden rind and light green interior provides a striking contrast. The people and their compliments, when viewing my planters, vases, and sculpture also inspire me.

Describe a recent piece or two.

"Nooksack Dream" started out as an irregular shaped Dunite river cobble. The forms I carved were made to compliment and flow with the natural twists and bumps of the original cobble. The cobble had a tan oxidation rind and a celadon green interior. I chose to carve a simple concave surface with a well-defined ridge that flowed from one side of the piece over the top and diminished into another concave surface on that side. The carved surface was polished to a high polish which "opened that window" into the stone to show off color and crystal structure of the stone. It is a very 3D piece and is mounted with pin and sleeve to allow for smooth rotation so you can see all that's inside.

Do you work part or full time as an artist?

Stone carving is now my fulltime career. I still do functional pieces and sell them to pay my expenses. During the cold wet winter months, I work almost full time carving. My work space is well lighted, warm, and somewhat small.

What stones do you prefer?

Hard stones: nephrite, dunite, peridotite, granites, basalt and others to be discovered.

What is your working process – do you do one piece at a time or do you have several in process at once?

I usually have a number of pieces in the works. Some may only be in dreamland, others waiting for the sanding and polishing stages.

What tools do you use?

I mostly use power tools, with diamond blades, wheels, and polishing pads. The availability of these tools has opened many opportunities for working with hard stone that were not possible 20 years ago. I work wet, simple garden misters make it easy, dust is not your friend.

Where do you exhibit your work?

I still do some markets and fairs. I also show work at local rock club shows, mainly to expose people to stone carving. Rock clubs do an excellent job of introducing young people to all things stone and they really like the stone sculpture. My work has been shown at Matzke Fine Art, and I am a regular at the NWSSA Camp B Sculpture walk, and the Seattle Flower and Garden show.

Have you been influenced by any particular artist?

Being self-taught, the artists I have run into at the symposiums have an on-going impact, in particular John Fisher, Deborah Wilson, and Tamara Buchanan. With many thanks to Karl Huffbauer, Carl Nelson, Verena Schwippert, Steve Sandry and the folks at Marenakos for mentoring me and my work

What have been your satisfactions in your life as an artist?

Seeing the smiles on the little kids that bought the river rock planter, with the hens and chicks and sedums growing in it, for their mother's day gift. Seeing people fondling the smooth polished surfaces on one of my sculptures. The photo of the blind group at Camp B touching all of the surfaces on the dunite piece "Nooksack Compromise" is a great example of why I do stone carving.

What obstacles and challenges have you overcome?

I have been able to convert a basement area of my house into a usable work space where I can work year round and not impact the living space above. By wet carving, I have controlled the dust problem. I recycle some of the water. There are times when I would like a bit more room, but in the winter I find my workspace warm and comfortable.

Thanks to all of my friends from NWSSA, you are the BEST!