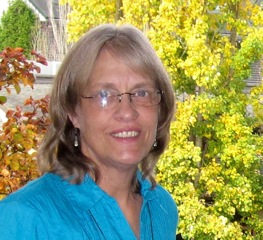 I already had an interest in stone carving when Pat Barton, a NWSSA member, was invited to my driftwood sculpting class. I hadn't talked with Pat for very long before I knew that I wanted to know everything about it. Pat suggested that I come to Silver Falls (now referred to as Suttle Lake), one of two NWSSA stone carving symposiums held each year. All my questions were answered in a quiet forested environment at Silver Creek Falls State Park and in the lodges spread across a grassy ﬁeld and in the dining hall eating three scrumptious meals daily alongside new friends.

I was so excited I got there early to help set-up. I felt like a kid going to summer camp. Right from the start I could see and feel the cohesiveness that bound these people together. 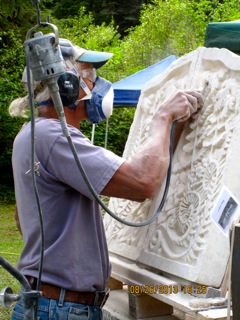 There was a common thread there and it was strong. I questioned many carvers and they were extremely giving of their time and knowledge, very open and sharing. Many loaned me tools to try and books to look at. I was given the parts to base my sculpture, including the pin, the epoxy to hold it and the temporary wood base. Along with the parts, I got the knowledge on how it all comes together. I was even given suggestions on ﬁnishes for the temperamental alabaster. The level of expertise was high. But more than that, I felt they had a genuine regard for me, a newbie trying to ﬁnd my way with stone carving.

There was plenty of carving time, and there were many talks and demonstrations in the ﬁeld. These ranged from types of tools and ﬁxing them to wet and dry carving, texturing, polishing and splitting stones. These were packed little sessions. I loved getting all that information.

Evenings offered up individual artist slide shows that left me in awe, and several very inspiring and educational lectures. Silver Falls could have been overwhelming. It could have been intimidating. But it was not. Instead it was amazing. And it answered my original question: I now have a good idea of what stone carving is all about. I'm on my way. I got a ton of knowledge about stone carving, certainly enough to get started. That was what I came for. But the selﬂessness of these artists is as strong as the stones they carve. I really admire that. It is now burned into my mind. It not only changed how I carve, but it changed how I think.

Question: At the recent NWSSA Symposium a term that was used regarding stone carving was the “skin” of the stone. Please explain the meaning of this term and how it applies to stone carving. Also how do you know in the process of sanding/carving of the stone that you have removed the “skin”?

Answer: In answering this question, NWSSA member Ron Geitgey had this response:

As used by carvers, skin (or crust or rind) refers to the outer surface of a stone that has some characteristic different from the interior. It may be a difference in color, hardness, mineral composition, or texture, that is, grain size and arrangement. Such alteration may be the result of surface weathering, percolation of hot or cold water along fractures, or movement along fractures (faulting) and its effects may penetrate sever al inches into the stone.

The skin may be either harder or softer than the interior. Granites contain feldspars that weather to clays, minerals considerably softer than the original feldspars. Under different chemical conditions quartz may be precipitated in pore space producing a harder outer layer. Color differences usually indicate a change in mineralogy. Basalts, as well as many other rock types, often contain iron-bearing minerals such as magnetite and pyrite, both of which alter to yellow, brown, and red iron oxides. Serpentine often exhibits slickensides, a smooth shiny surface developed as the rock fractured and moved. Flint nodules, formed in limestone, often have an outer surface, called a cortex, of softer remnant limestone. All of this is one of the main reasons a geologist uses a hammer, to break through any alteration layer to see the original rock underneath.

From a carving standpoint, markedly conspicuous skin is often incorporated as a design element, leaving areas of it intact as a contrast to the unaltered stone, as with pieces done in jade or basalt. Complete removal of the skin leaves a more uniform stone. Knowing when you have removed any skin is a matter of recognizing when the stone characteristics, usually color, have changed.

Is it better to finish sanding alabaster wet or dry?

In answering this question, NWSSA member Meredith Earls had this response:

“It is definitely better to finish it wet. With dry you might never get a scratch-free surface. One of the most important reasons is that you are able to constantly wash off the surface, especially between grades of paper, so you are not using the old grit to re-scratch the surface. You are also constantly “cleaning off” the sandpaper as you go, for the same reasons.  Dusting off dry particles does not work.

Remind members that water masks some scratches so they need to let the piece dry between grades. Look for larger marks on the stone that will need to be removed. It helps to mark them with some non-porous but removable material (i.e., graphite) and then sand with water again. You can coat the whole piece with graphite or some spray-on primer between coats and know you are not ready to go on to the next grade until it is all  removed.”

Ed: This is Sid’s last column in “Sculpture Northwest”. We thank him for his time and participation.