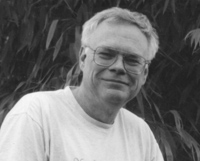 Q: What causes the holes in travertine and do they affect carving?

A: The kind of travertine with holes in it is a form of limestone, calcium carbonate, or calcite, deposited from hot springs and hot lakes. When thermal water saturated with carbon dioxide and calcium reaches the earth’s surface, some of the carbon dioxide bubbles off or is removed by biologic activity. This changes the water chemistry causing calcite to crystallize as thin sedimentary layers and as coatings on the cell walls of bacteria and algae and on the stems and leaves of more complex plants growing in the water.

Eventually the organisms die and decay leaving cavities within and between cells and plant fragments. The cavities range from microscopic to an inch or more. After initial deposition continued circulation of saturated water may add more calcium carbonate, filling many of the holes. Evidence of infilling can often be seen on polished surfaces as a rim or layer lining the larger cavities. The smaller ones are already filled. This lack of porosity, in spite of appearances, is why travertine is useful as building stone.

Travertine has been quarried in the Siena and Tivoli areas of Italy for over 2000 years and material from those quarries is still exported around the world. Turkey, Spain, and Mexico are also major modern producers and many countries export smaller amounts. Although there are many occurrences in the United States, only three are currently in production: southwestern Montana near Yellowstone Park, southeastern Idaho, and central New Mexico south of Albuquerque.

Carving travertine does require some extra attention. A cluster of holes can behave as if the stone were softer and it’s easy to over-carve or over-grind. Carving from more dense stone up to a hole can fracture the edges deeper than you intended, especially if you are using a point. Your choice then is to leave the tool mark or more carefully carve the entire surface deeper to remove the mark. As I approach the final surface I use a wide claw, an inch or more with 5 or 6 teeth, which spans the entire hole reducing the risk of over-breaking. Grinding or sanding with a rigid disk is another solution. Using your fingers or some other flexible backing in the final stages of sanding can round the lip of a cavity creating a surface that reflects a narrow rim of light around each hole. You may or may not want that.

I made the qualification in the first sentence because dense, banded, translucent limestone deposited from cold springs and as various cave formations is also called travertine. Other names used include onyx marble, Mexican onyx, and (incorrectly) alabaster. To add to the confusion the term “onyx” with no modifiers means a banded form of quartz, which is considerably harder than calcite.