Ed: this column on alabaster was last printed in Sculpture NorthWest in the March/April, 2001 issue. Bill Laprade (say it La Prawd) lives in Seattle and is a stone sculptor and a geologist. As a past NWSSA Board Officer for four years, he helped shape the policies for many Association procedures and Symposia. Bill is graciously permitting us to reprint a few of his useful stone columns and we hope you benefit from his expertise and knowledge. 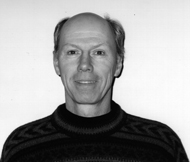 Waxy, multi-colored alabaster has been the stone of choice for artists and artisans for millennia. It not only serves as the source of beautiful sculptures, but historically it has provided utilitarian objects such as jars and casks. It was prized by the Assyrians and the Egyptians for its beauty. One of its most handsome and unique characteristics is its ability to pass light; imagine, a stone through which light can be seen. While we sculptors use it for carving, alabaster's cousin, gypsum, is around us most everywhere we go and is handy on all our workshop shelves.

Alabaster is one of several forms of gypsum, and it is both a mineral and a sedimentary rock.  It is hydrated calcium sulfate, CaSO4' H2O that is found in many places throughout the world. It is a sedimentary evaporated deposit that precipitates from the evaporation of saline water. The ideal conditions for its formation are (1) a restricted arm of the sea, (2) intense evaporation, (3) replenishment by normal sea water and (4) gradual sinking of the basin.

It is unknown whether gypsum is deposited directly in its hydrated form or if it evolves from other minerals. Gypsum may be transformed from anhydrite (CaSO4), as this anhydrous version takes on water when exposed to the elements near the earth's surface. In support of this hypothesis, gypsum is only found in the upper 100 to 300 feet of the earth’s crust, where the weathering process has affected the rock. Alabaster is the massive, fine-grained crystalline variety of gypsum. Other rocks that are commonly found in association with gypsum deposits are halite (salt), calcite, dolomite, clay and limonite.

Alabaster has a hardness of 2. It comes in a wide range of colors: white, translucent, gray, yellow, brown, orange, pink, green, raspberry, strawberry and variegated shades. The colors are the results of impurities such as organics, clay and iron oxide (rust), among others. Green alabaster may take its coloring from smectite clay that is commonly found in the same depositional environment. Commercially mined alabaster is bedded, with strata ranging from 3 to more than 100 feet thick. Products for which gypsum is used are fertilizer, concrete additive to retard setting time, a yeast growing nutrient, a flux for pottery, plaster of Paris, patching compounds, stucco and drywall.

Some of the locales where alabaster is found in the world are Utah, Colorado, California, Arizona, New Mexico, Florida, Tuscany (Italy), Iran and Pakistan. Much of the alabaster that finds its way to the Pacific Northwest is from Utah and Colorado.

Most of the alabaster quarried in southern Utah is very close to the ground surface. Only a few inches to a few feet of overburden are removed by a bulldozer to expose the stone. Because of the high elevation and rough winters, the work is carried out during long work days for about five months in the summer. The quarry areas are normally inaccessible during the winter.

Deposits of alabaster in southern Utah are layered in strata ranging from a few inches to four feet thick. In some quarries the stone breaks out in round or oval boulders that average two to three feet in diameter. The most common methods of removing the stone are a bulldozer and the use of a hand-held drill. The drill holes are closely spaced and then shims and wedges are used to break the stone into desired sizes. At some quarries, light blasting is used to loosen the stone. Experienced quarry operators check the stone for inclusions and fractures before breaking it into smaller pieces and displaying it for sale.

Alabaster is well known as a stone for teaching, because it is soft, carves easily with hand tools, and if you are fortunate, does not contain big surprises. The hardness (or softness) of 2 is conducive to easy removal of stock and yet alabaster has the ability to hold detail in the manner of many harder stones. Unlike another soft stone, soapstone, that commonly changes hardness, has hidden fractures and spalls unexpectedly; alabaster is generally uniform in hardness and contains fewer veins or fractures. Some of the flaws that do arise are veins or voids filled with clay. Fortunately these mud veins or pockets are not laterally continuous, so that although the design of a sculpture piece may have to be altered, it is uncommon that the stone is a loss. Unfortunately, the mud veins or pockets are not normally evident on the outside of the stone. While cracks or fractures in alabaster are not common, there has been some experience that Colorado pink may contain more hidden fractures than other varieties of this stone.

Alabaster can be worked easily with hand or power tools. Roughing of the form is accomplished with points, followed by toothed and flat chisels. Chisels bruise this stone easily, so inspect the surface vary carefully as you start to refine the piece with rasps and sandpaper. Rasps of different roughness or die grinders (with a jet of water to keep the dust down) are then used to impart the details of the piece. The degree to which sanding is taken is a personal decision of the artist. Some prefer to stop at 600 grit, which gives a "soft" finish, whereas others go to 1200 or 1800 grit, which imparts a bright polish. Akemi polishing fluid (stone sealer) #10-2012 or floor wax can also be used to bring out an even brighter sheen. At least three rounds of wax-and-polish are necessary to bring out a good shine.

Because of its softness and susceptibility to the natural elements, alabaster is an indoor stone. Left out-doors, moisture and freeze-thaw would soon soften the surface of the stone and ruin any details in a few years. This may be one of the reasons that the price of an alabaster piece is limited, in comparison with the harder stones.

And remember!!  Keep your goggles and masks on. The dust is very fine grained and keep in mind that it is the same mineral that is used to make plaster of Paris, spackling compound and other quick-setting fillers. Don't let it set up in your body.

Artists Meredith Earls of Seattle and the late Neil Gemmill of Kirkland generously shared their knowledge and expertise of alabaster with us. Thanks to Evelyn Dettamanti of Cedar Memorials and South-west Stone of Cedar City, Utah for information regarding the mining of alabaster in southern Utah.