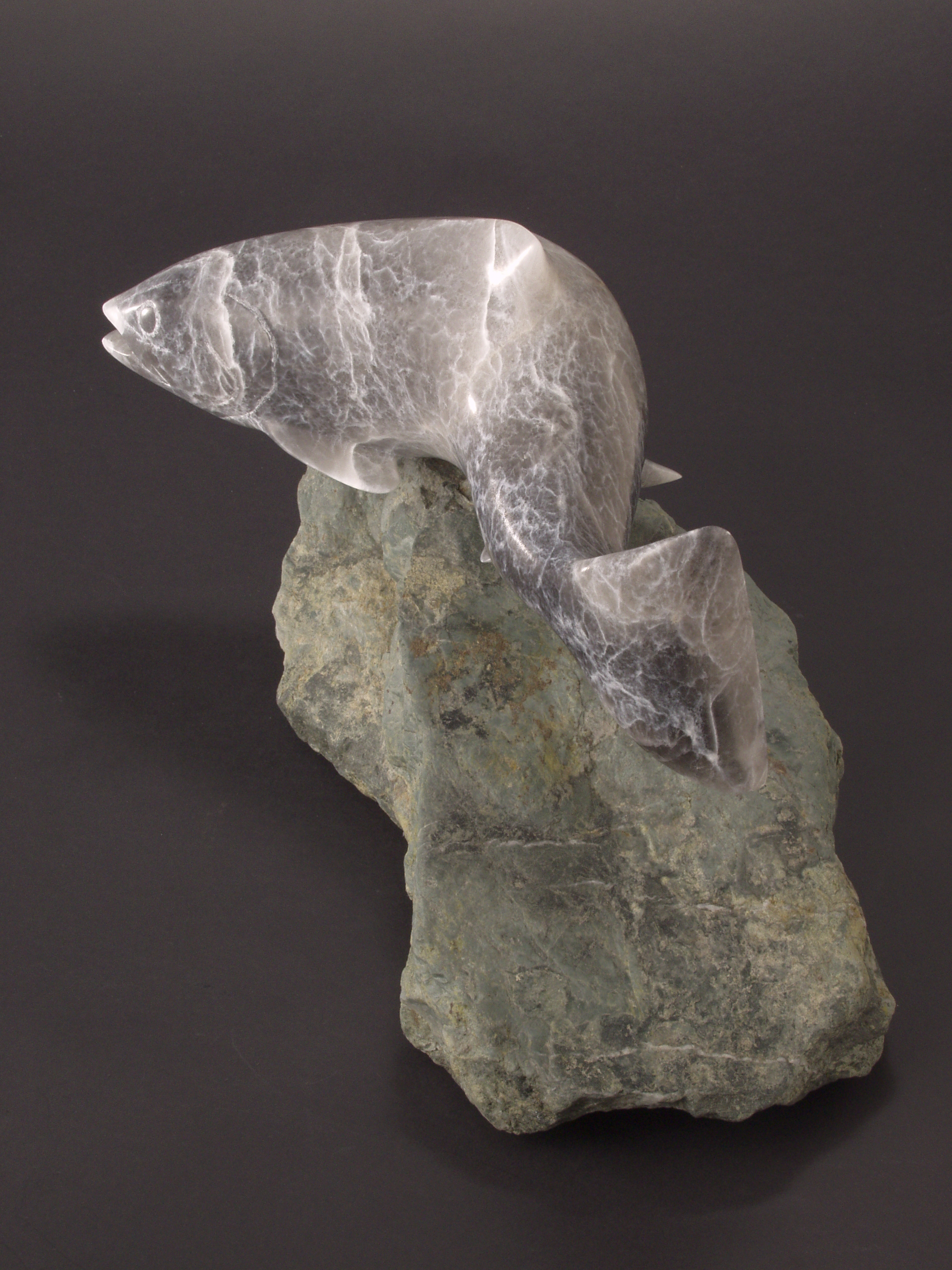 My name is Bill Weissinger. By profession I’m an attorney, and by avocation a writer (WilliamWeissinger.com) and of course a stone sculptor (WeissingerStudios.com).

What is your life history as it relates to being an artist?

In the 1980’s I did some clay sculpture but never fell in love with the additive process. In 2003 I took a three-day course from Tracy Powell at the Sculpture Park on San Juan Island. I loved the subtractive process – with clay you can futz forever, adding, taking away, adding, taking away, but with stone, once it’s gone it’s gone. I found that freeing. Tracy was a helpful and yet laid-back instructor. I loved the first piece I did. I went to the symposium at Camp Brotherhood that summer, and I was hooked.

Why did you become an artist?

I’m not sure I am an artist. Yayoi Kusama is a well-known Japanese woman who gained fame during the Pop-Art years with her polka dot art. She claims that, while others say what she has done is art; she views her work not as art but as therapy. For me it is much the same. Most of the work I do has an inner meaning which I need to express.

What are the emotions for which you seek an outlet in art?

Anger; desire; suspicion of those in power; a love for the environment; and the sense that, no matter how many friends one has, one is alone. 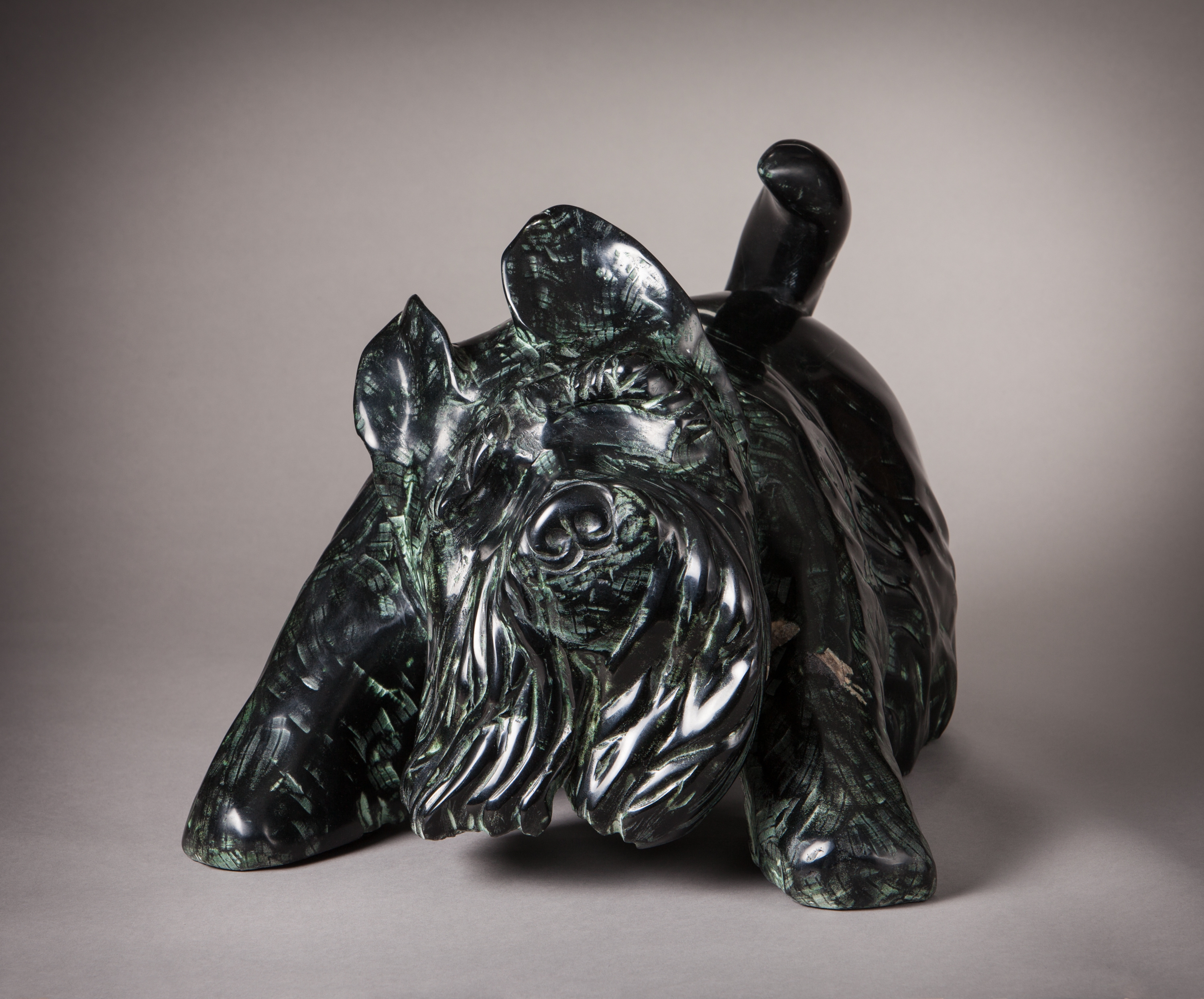 Who or what has influenced your art form?

At NWSSA’s 2013 Silver Falls program, Laura Alpert told me that no one sculpts on a clean slate, that everyone is influenced by someone. The advantage, she said, of going to art school (or of the alternative which she recommended for me – seeing a lot of art) is that it not only increases one’s art vocabulary, but makes you more conscious of the origins of one’s style. For me, so far, I can’t identify someone whose ideas I’ve consciously incorporated, although of course (as Laura said), I’ve been influenced by many artists nonetheless. In terms of artists who are teachers, I’ve also been influenced by Marsha McAllister (a workshop leader in Friday Harbor) and by Hon Ching Lee, who was kind enough to offer me advice.

Why is art important to you? 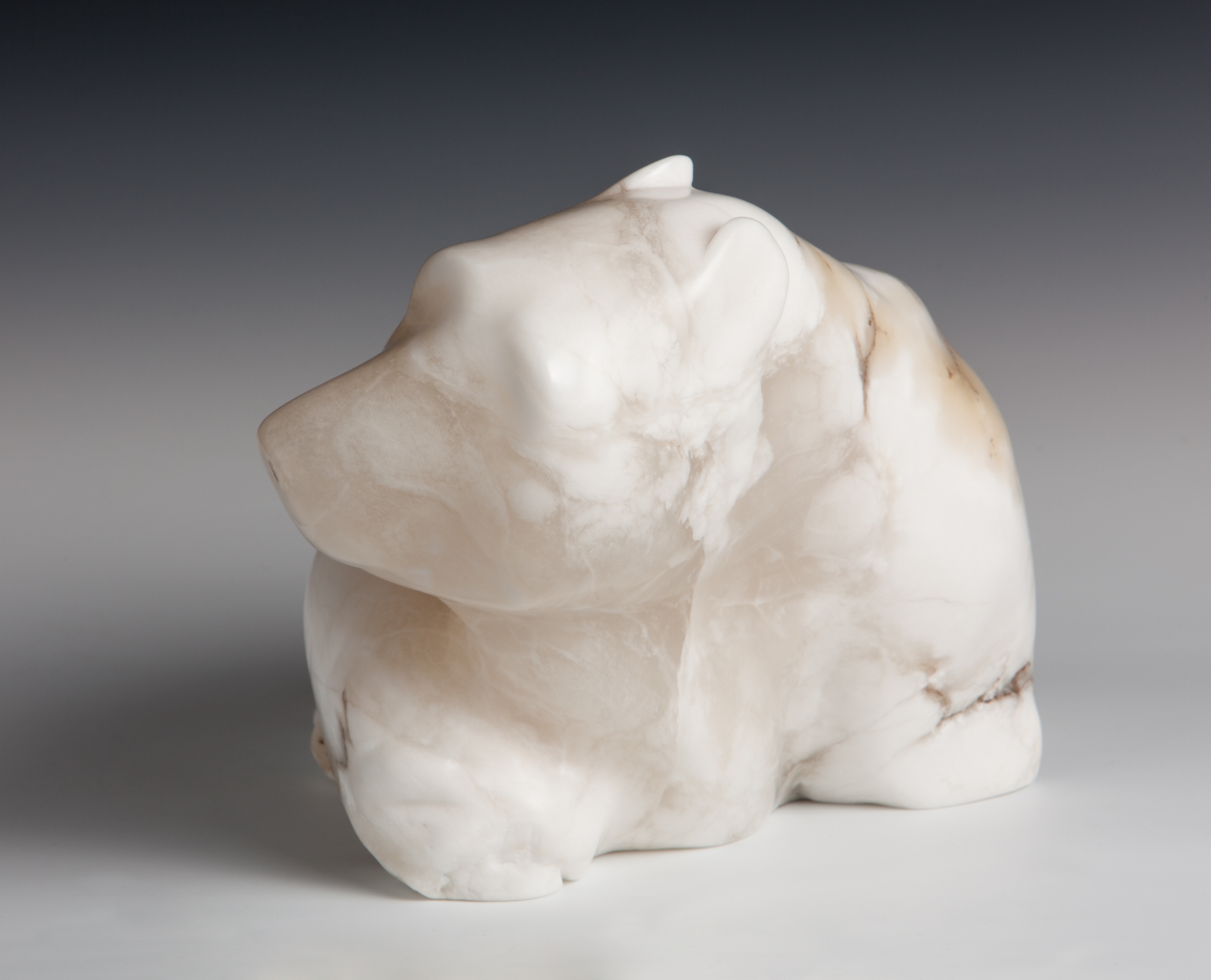 As an attorney, my life is circumscribed by laws, by codes of conduct and clients, and by Reason – but sculpting frees me from those restraints: I can carve what I like, build in what meanings I like, and no one cares, because it is “Art.” I like the loss of consciousness in the outside world when I’m working on a piece. I like people running their hands over my sculptures and telling me how much they like them. I like being able to say things with Art that one couldn’t easily say otherwise, like a self-portrait I did of me peeking out from behind the Void.

How has NWSSA influenced your work as an artist?

I wouldn’t be a stone sculptor without NWSSA’s influence on my skills and on my artistic abilities. It has provided symposiums and, at them, a team of dedicated volunteers and guest artists, all in an open, accepting environment in which one’s “outside” identity (Democrat or Republican, straight or gay, attorney or carpenter) is not so much accepted as not even relevant, for all of which I thank everyone who reads this. For fear of leaving someone out I won’t name the individuals who’ve made the biggest contributions to my growth, but I hope you know who you are. Thank you.

Describe your art in your own terms – focusing on your stone carving.

I hit a spot a while back when I was having trouble finding anything significant to sculpt, so I made a chart that diagrams my art; it has six primary circles, each addressing a separate major theme in my art: challenges to power or authority; self-discovery; environmental issues; water; northwest animals; and feminine and phallic forms. Almost all of my art work falls within multiple categories. For example, Scottie seems like just a normal, playful dog, and yet his tail has the sensual curves that one often finds in my work. Same with Swimming Free II – one sees the fish, but one’s hand feels the curve.

Almost all of my work is representational – to me, although those looking at a piece may not see what I see. That is true even of sculptures that look purely representational. While friends may say, “Oh, how cute, a salmon,” that cuteness is rarely what I see myself.  And I like it like that. I get to bare my soul (to myself) while others see pretty animals.

How do you get your ideas?

Sometimes a rock suggests an idea to me. Sometimes I suggest an idea to a rock. The rock and I don’t always agree.

How do you develop them (by direct carving, drawing, modeling, etc.)?

The more experience I have with a particular form, the less I need to make a model of a piece before sculpting it. I almost always draw out forms first. Sometimes I have to work harder on a particular idea – I recently leafed through an old sketchbook and found a dozen different preliminary sketches for what ultimately turned into a lovely tower-arch. Sometimes I can’t work out the idea and I need to let the stone rest. That happened with Two Salmon, which started out as a sculpture of three salmon, and then sat for a few years until I realized that the stone held only two salmon, not three.

What is the source of inspiration of your forms, language, or imagery?

I get a lot of superficial inspiration from Northwest animals – I’ve done a number of bears and salmon-ish figures. I’ve also done a series using forms that are more obviously symbolic, such as thrones and towers. Crooked Throne is one example.

Describe a recent piece or two.

My two most recent pieces, Scottie and The Birth of Yin and Yang, are also perhaps the best example of the range of my work. I like the juxtaposition of these two pieces.  Scottie is a cartoon image of a playful, happy Scottish terrier; I wish I felt that way more myself. Only Scottie’s tail carries the sensual curves that I usually include with a piece. I like The Birth of Yin and Yang, an almost abstract sculpture, for different reasons: it has the sensual, almost erotic curves which I like to create, which here are at once phallic but also very female – reminiscent of breasts and buttocks. I also like its reference back to the Beginning, before Yin and Yang were separate; a more peaceful time, but perhaps you can sense the tension being created as the division begins.

What was involved in creating them? With both sculptures, I knew what I wanted to do before I started carving.  With The Birth of Yin and Yang, it was merely an issue of finding it in the rock.  Scottie was much more difficult technically. The rock I’d selected barely left room for his ears and for his tail. I had to work very carefully to preserve the high points. Then I found a flaw that ran through its tail, and I had to drill up from his abdomen high into his tail so that I could epoxy in a steel rod. In doing something similar with a prior piece I’d aimed poorly and drilled through to the outside, so this time I was both more careful and more anxious. Not often enough, but sometimes, I learn from my mistakes, and I did this time.

You also can see in Scottie the remnants of my decades-long struggle: I love the glow of polished rock, and yet, as Richard Hestekind, JoAnne Duby and others have tried to teach me, that isn’t always the best way to bring out the form.  With Scottie I tried for the best of both worlds, but I always find the balance difficult.  Is he over-polished? You be the judge.

How much work do you complete in a year?

I had been sculpting 6 or 8 pieces a year in an outdoor studio, with my next door neighbors getting increasingly grumpy over the noise. I obviously needed to build a studio, and beginning in 2009 I didn’t do much sculpture work while the studio was in process. Now that the studio is finished, I’m getting back into production mode again.

Where do you exhibit your work?

I’ve had several pieces at Karla Matzke’s fine art gallery on Camano Island. My work had been regularly on display in two galleries, one in Friday Harbor and one in Anacortes. Sadly, they both went under during the Great Recession. Now that I’m producing more work, I’ll soon be looking for a gallery again. I have had two sales this year, including SwimmingFreeII for $3,000, and that is nice.

What is happening in the Art world on the San Juan Islands?

I’m on the Board of Directors of The San Juan Islands Museum of Art. It is just about to purchase the building it is renting, and in the next seven months will be remodeling into a true museum space for a July 5th opening with the work of a major artist.

How is your work area set up?

Inside a 400 sq. ft. studio I have an 8’ x 8’ cube walled and roofed in with transparent plastic roofing, with one wall being a “strip door” made up of overlapping 8” plastic strips. A 12’ duct with an in-line fan carries dust outside.  The floor is concrete, with a covered trough in the middle.

What obstacles and challenges have you yet to overcome?

I’d like to unlock that staircase leading up from the basement and let myself sculpt what comes through the door – or, as I put it in a recent overly-dramatic list-serve post, to sculpt “the creatures my heart knows are slithering toward me through the underbrush of my soul in the dusk of the coming night.” I like Tim Burton’s work, for exactly that kind of freedom. Mostly I wish I could (as MJ Anderson suggests we artists need to) grow a pair of square balls so that I wouldn’t listen to the critic on my shoulder.

Finally, I just want to say…

I like carving cute Scottie dogs and salmon and bears, and I’m pretty good at it and getting better. That’s a fine thing to aspire toward and I do. That isn’t all I want from my sculpture though. When I can do both at once, the beautiful and the meaningful, then I feel I’ve been successful.