My identity as an artist is embedded deep in my psyche; for me there is no choice and there is nothing else. Yeah, I do other things, but creation is a primary force of my personality, and the narrative I live is entwined with my artwork in a way that it is the literal visual record of my experience. I use art to purge, to define paths, and to embark on new journeys.

As a child growing up in the stark farmland of Illinois, surrounded by fields of corn and soybeans, I dreamt of growing up to be a published poet, performing opera singer, or professional visual artist. In higher education I trained in the first two, up through degrees in writing and choral competitions while painting secretly in my room. I refused teachers in visual art until much later, intent on developing my voice first. And while I had always considered visual art to be the least strong of the three for me, it’s what ended up becoming my dominant path over the course of my 20s.

Partly, the reason for that is how my narrative, my personality, and my creativity melded. For me, my art is my breath. I wither and suffocate without paints, stone, or tools. I have nightmares of losing my hands and won’t ski or ice skate or otherwise put them in danger.

I painted almost exclusively until 2009, until coming home from a 3 month walkabout to 11 major cities in Europe and North America. I went to every art museum, letting myself be drawn where the magnets were. The stone statues in particular—I was so mad they wouldn’t let me touch them. So at some point, I gave myself permission to make my own so that I could: I gave myself permission to sculpt. 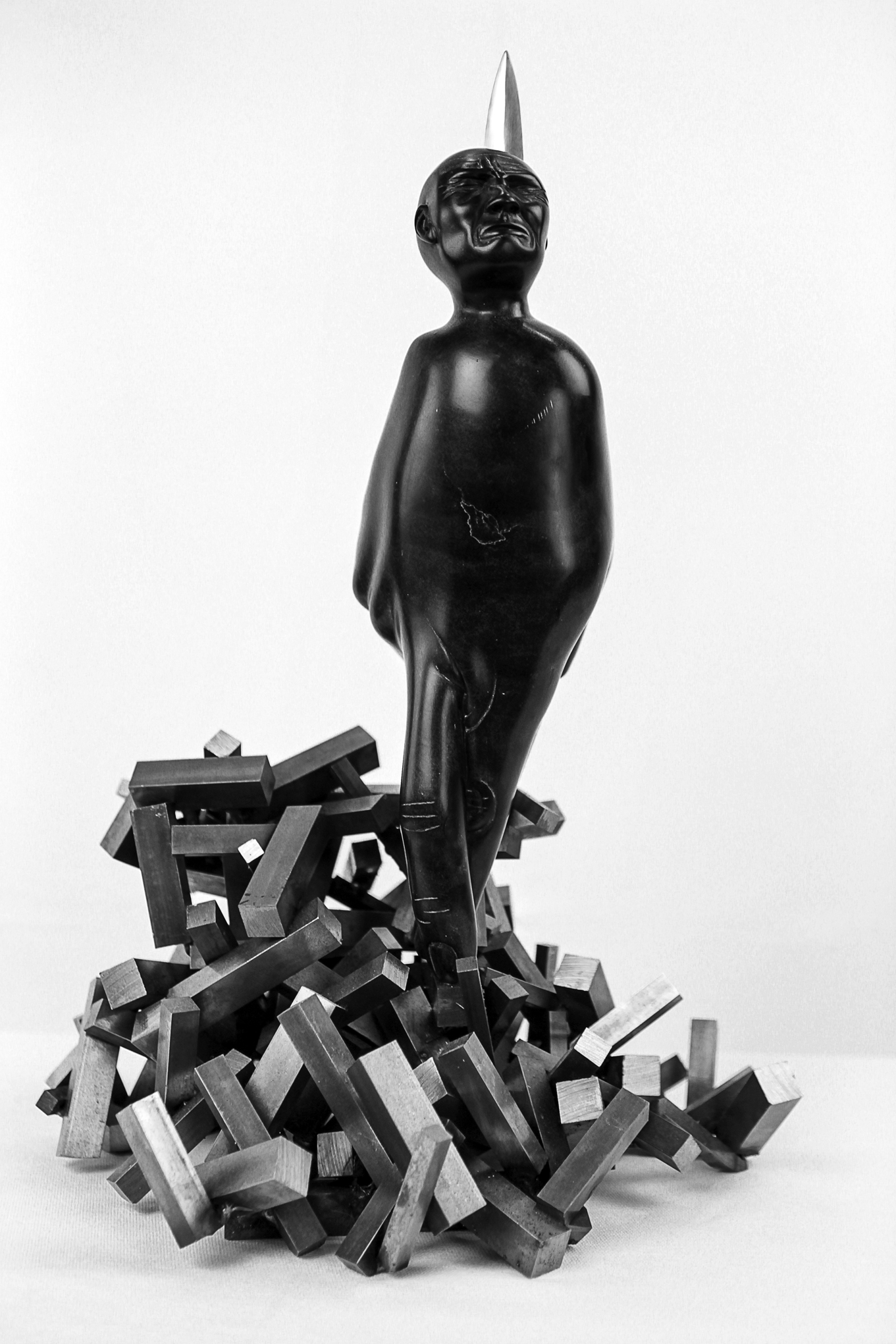 So I came home and dove into whatever I could learn. I joined a Burning Man blacksmithing collective where we made large-scale pyrotechnic art. I interned at Pillow Studios with a kinetic steel and glass artist. I was accepted to a residency at The James Washington Foundation, initially for steel fabrication, but they let me switch to stone work and make a huge dusty mess in his studio. Stone work… it felt like medicine. And I needed medicine, so I ran toward it.

My first major piece was “The Knife,” and through the process of working on it for 175 hours (the initial sculpture 120, the bronze castings 55), I discovered something of a drawn–out process of mapping my subconscious on a particular theme. I already knew I could manipulate my experience with reality through what I was making, but this was something different: I could actually dive into my thoughts without reacting to them and just observe while my hands were busy doing detail work with X-acto knives and dental picks. Like most of my major works, the end image of “The Knife” came to me fully formed: in a flash second, my eyes white over and there, the construction (or substruction) of the piece crystallizes in front of me. I know every moment of the surface before I even begin. Then, I just have to make it.

“The Knife” was a study of emotional defenses, in short, a hard look at everything I was doing to misguidedly “protect” the emotional, soft sides of me that I’d locked away somewhere. A katabasis journey into the dark, seeking out those parts of me and looking at which behavioral guardians jumped up in the way to distract me from finding them. Every feeling and thought on this was mapped onto the surface of that sculpture. 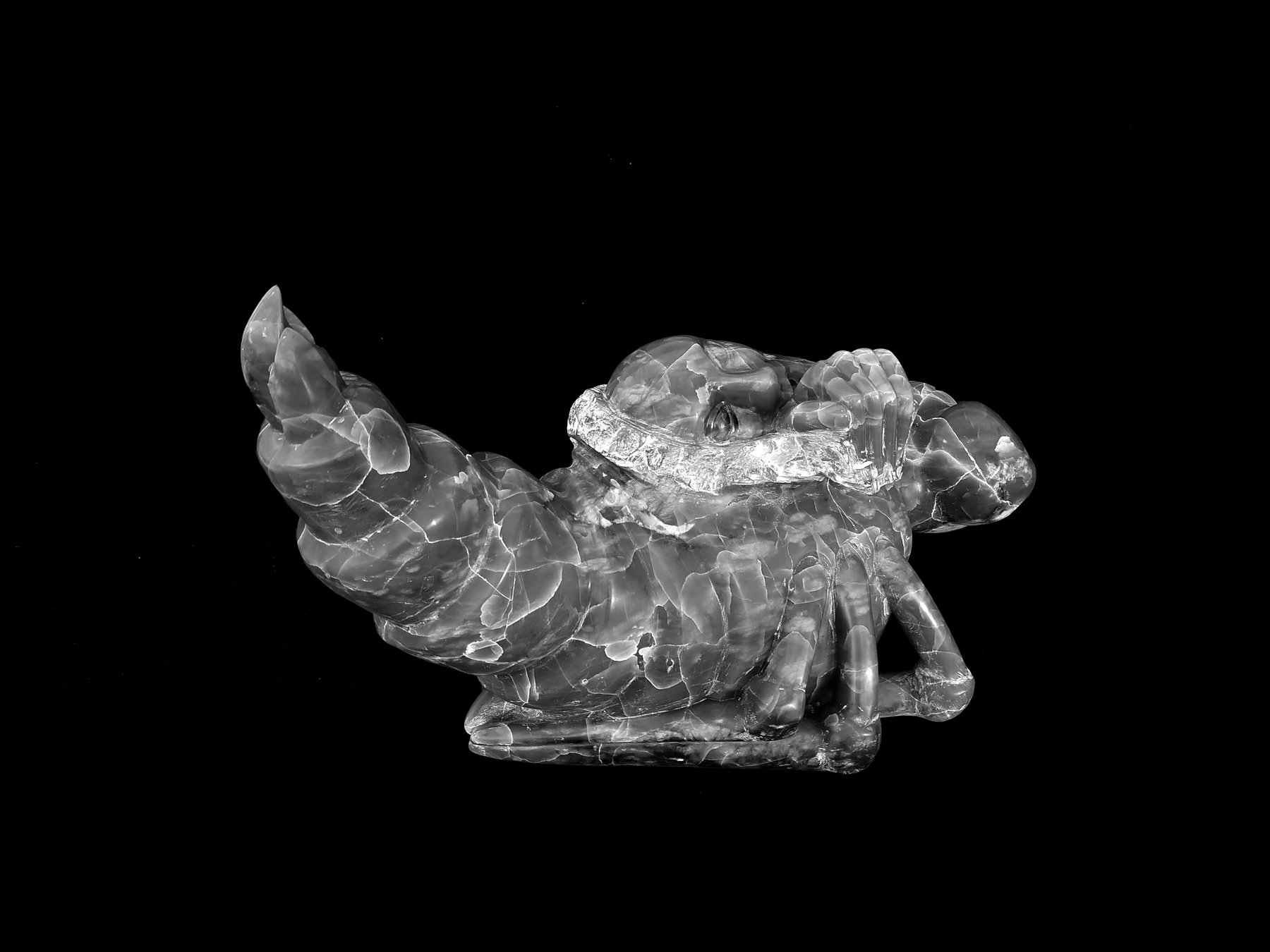 The result of that really captured me, and I created seven major works with this particular method, choosing themes that could take me somewhere stronger, somewhere more open. Chlorite was perfect for it. Smooth and consistent, working with the stone wasn’t a struggle. I love brucite and this crazy old marble I’m working in now, but surfacing and detailing is a serious challenge because of inconsistent densities that need too much attention. I’m moving into basalt, which is also nicely consistent, as I’m looking to work in life–size figurative. I’d also like to get back on track for public work, so the durability is very attractive, too. Still, the last piece of the series was in brucite, as it couldn’t be in anything else. “The Dragonfly on My Shoulder” (2018) was the final molting, as a new me, whole and integrated, shed its last skin. A lot of people react to the imagery with the little alien bug face crawling out of the back of a dragonfly nymph as creepy, but all I remember is that first breath of fresh air and the intense beauty of becoming.

But let’s talk here of some of the side missions I’ve gone on with stone carving. Not every piece could be that kind of intense psycho-emotional journey, and often those would take me well over a year to get through, so I’d take a month or so off to explore another theme. Plus, I could fill a book with that narrative (ooh, foreshadowing!) Still, I have such a method built in now that each of these proved rather intense experiences as well. 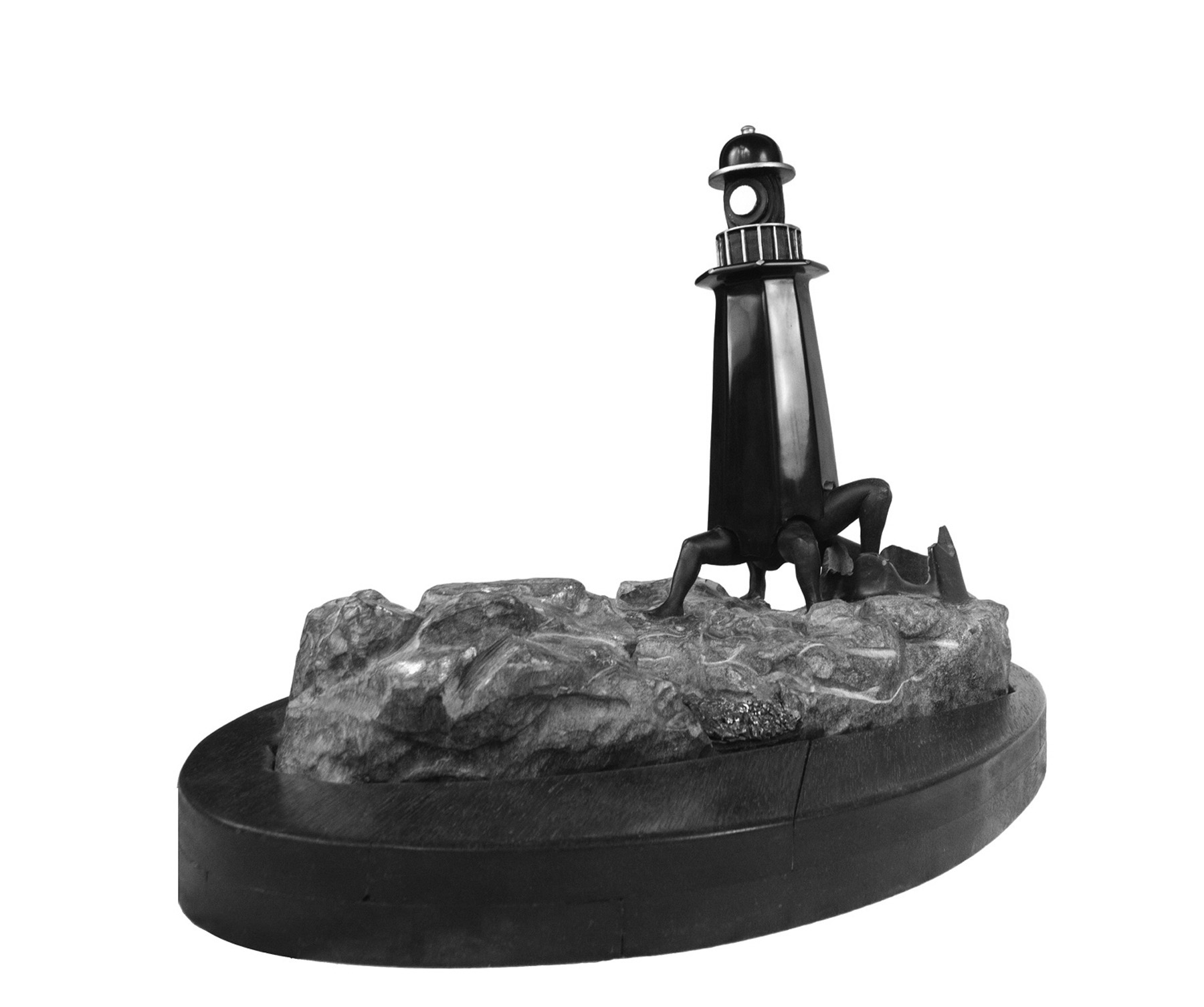 “Something of a Shearing” was a fairly long term side story, and the full narrative of it was published in this journal a few years ago after it was finished in 2016. It first came into being when I decided to start working in 3D—for months my entire perception of the world was from inside the top of a lighthouse, the gears moving it slowly as my focus and visualizations shifted. At first it was a painting; then I determined to make it a stone carving. It quite literally became the story of building my studio. I started it at Pillow Studios, where my boss was kind enough to let me do stone work outside the metal shop, and worked on it at eight different places, taking it with me through my travels and journeys that led me to Vashon. The last little part of it was turning on the light in my greenhouse when I had finally landed on Vashon for good. The weeks leading up to finishing it were mostly up at Studiostone in Vancouver (all the fitting and polishing), then at Tom Small’s place (where I made the base), and during this time as it was coming to life it started to walk beside me rather than up on my shoulder. It pulled off of me like some sort of budding and became its own little creature. 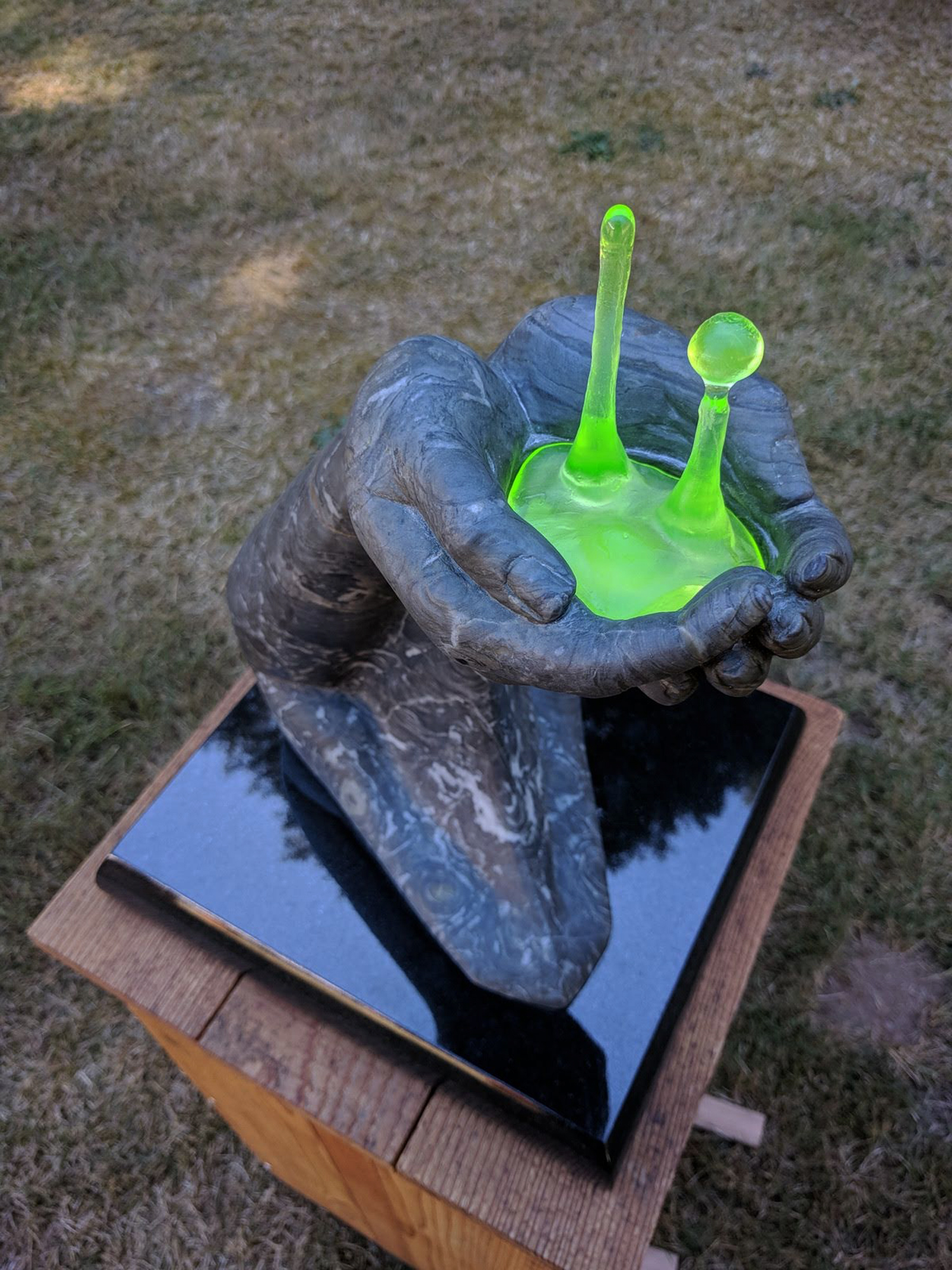 “Foremother” (cover image) was the next side–mission in 2017, and perhaps the first that was truly a concept piece from the start. I had this ancient marble from Neolithic, with some of the earliest fossils in it and the opportunity to cast some uranium glass. I’d been feeling the idea of offerings lately and decided to do a piece about cyclical reproduction—the unstoppable drive for renewal. What it will feel like for Gaia to repopulate life after we destroy it. And part of what it feels like to be being flayed open right now. I spent about two months on this, all told, and it was incredibly intense. I hadn’t really known where I was going to go emotionally with it. At one point we got into a fight when I found out she had no skin. I fell head-first into her anger and the ground beneath me turned solvent; I ended up in the woods, charging overdressed and overheated, the trees pulsing and guttural screaming around me. It was coursing through me. So what do you do with that? Shower, eat, self care, and listen. Then finish the piece and kind of decide not to go back there again.

“I Can Breathe in this Water” was a piece done in translucent marble for the Seattle Erotic Art Festival in 2018. She was based on a commission by a woman who was moving across the country, pulled from her lover, as a parting gift. The figure is based entirely in hearts and exudes femininity, submission, and seductive power. This was really a fun one. It was spring in the studio, and I spent every day just awash in my feminine side. I bought dresses and makeup. I danced. I really loved working on her, and this particular marble is such a joy. This stone was quite sugary, so I was released from sharp edges, and the curves all had to be so soft. It filed like a dream, and the metal veins ended up emphasizing the contours better than I could have planned. 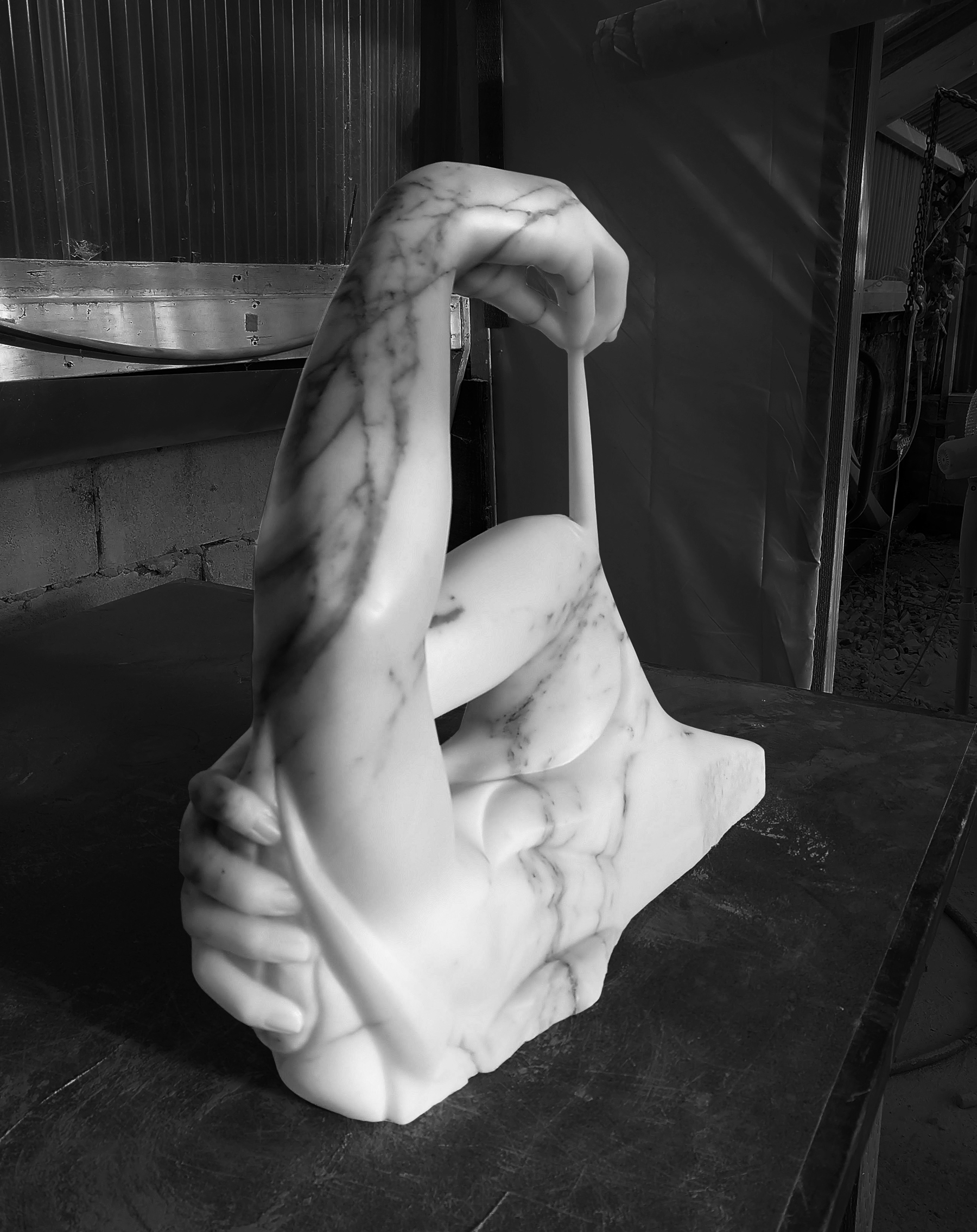 “Reconcile (The Mother)” is a terrible title, but I haven’t come up with a better one yet. It’s one of my best pieces so far though. Made this spring, 2019, I initially thought it would be about my own relationship with my mother, though going into that didn’t really thrill me. It’s the same marble from above, and a solid piece of it. So gorgeous to work on—there were moments it took my breath away and I cried in joy. After having spent something like 350 hours already carving hands, this entire sculpture happened quite quickly, 83 hours overall. What I didn’t expect was for it to be more about my own decision not to have children. First of all, when I started, it opened up this tunnel back to my birth, and all my memories were happening kind of at once. I’m having to do things like go to the grocery store and be ‘normal’, while wide open so far that, inside, I’m reliving screaming at birth and the intensity of pure infant emotions and looking through wounds, stitching them together. My arms were searing. And then my body decided it was pregnant. This hasn’t ever happened to me before, and of course I wasn’t. I’m an adult with an IUD. But my body was convinced, and I had all the signs. I went through all the “what ifs” the “how would I handle it” the “would I want this?” to the “if so would I change my lifestyle while I still have time?” Oh lord. It was a lot. I ended up taking a test to just stop the questions. I went back to living in the portal until the sculpture was complete and did in fact make some peace with my mother. I got a pair of kittens. And then all that receded into the distance. 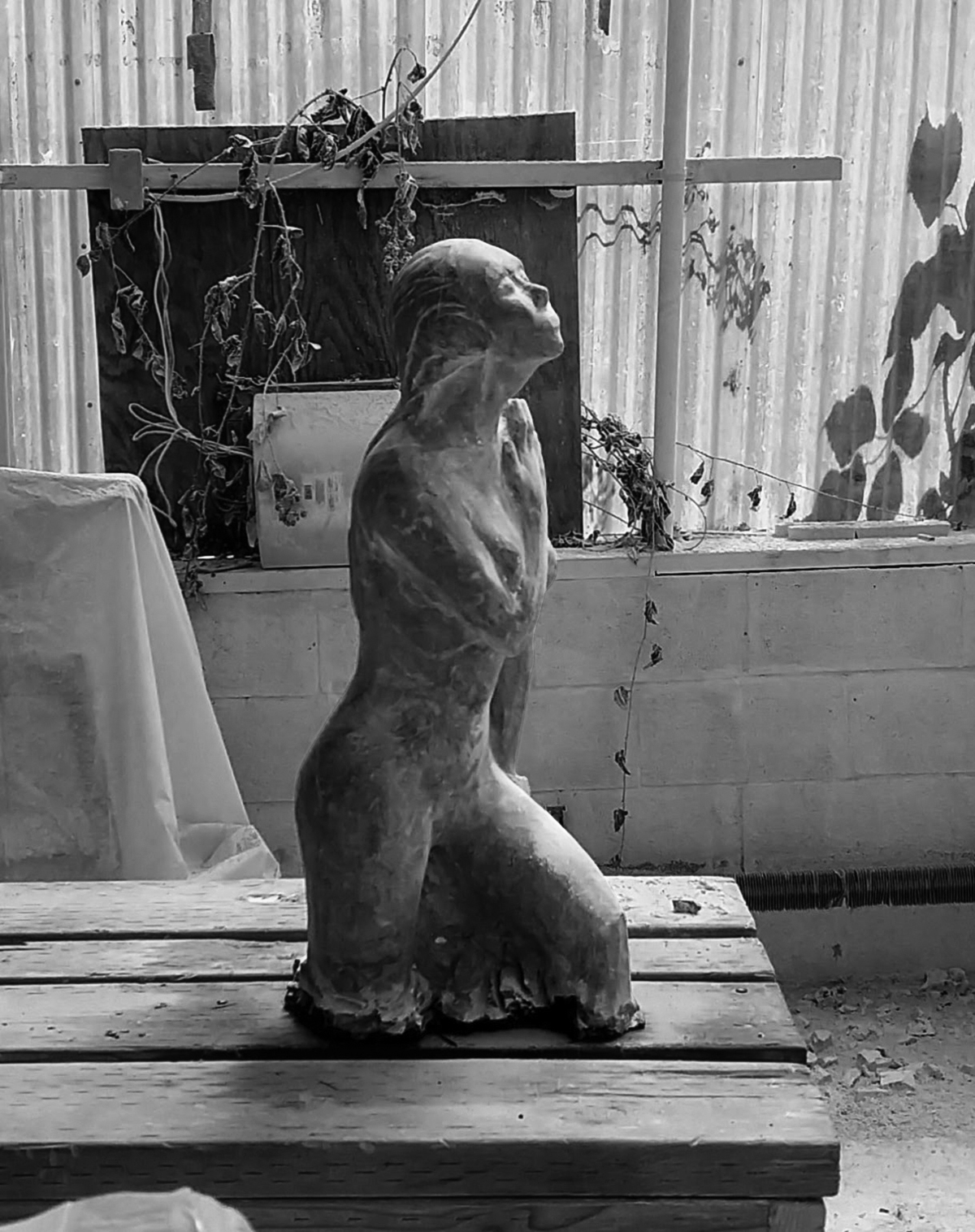 I’ve started working on another piece of the ancient marble now; a piece about the acceptance of failure and moving on with grace and dignity. It may not turn out. The surface is a struggle, so the anatomy isn’t ending up correctly. I’m ok with it. It will do what it wants with my narrative and that will be the truth. 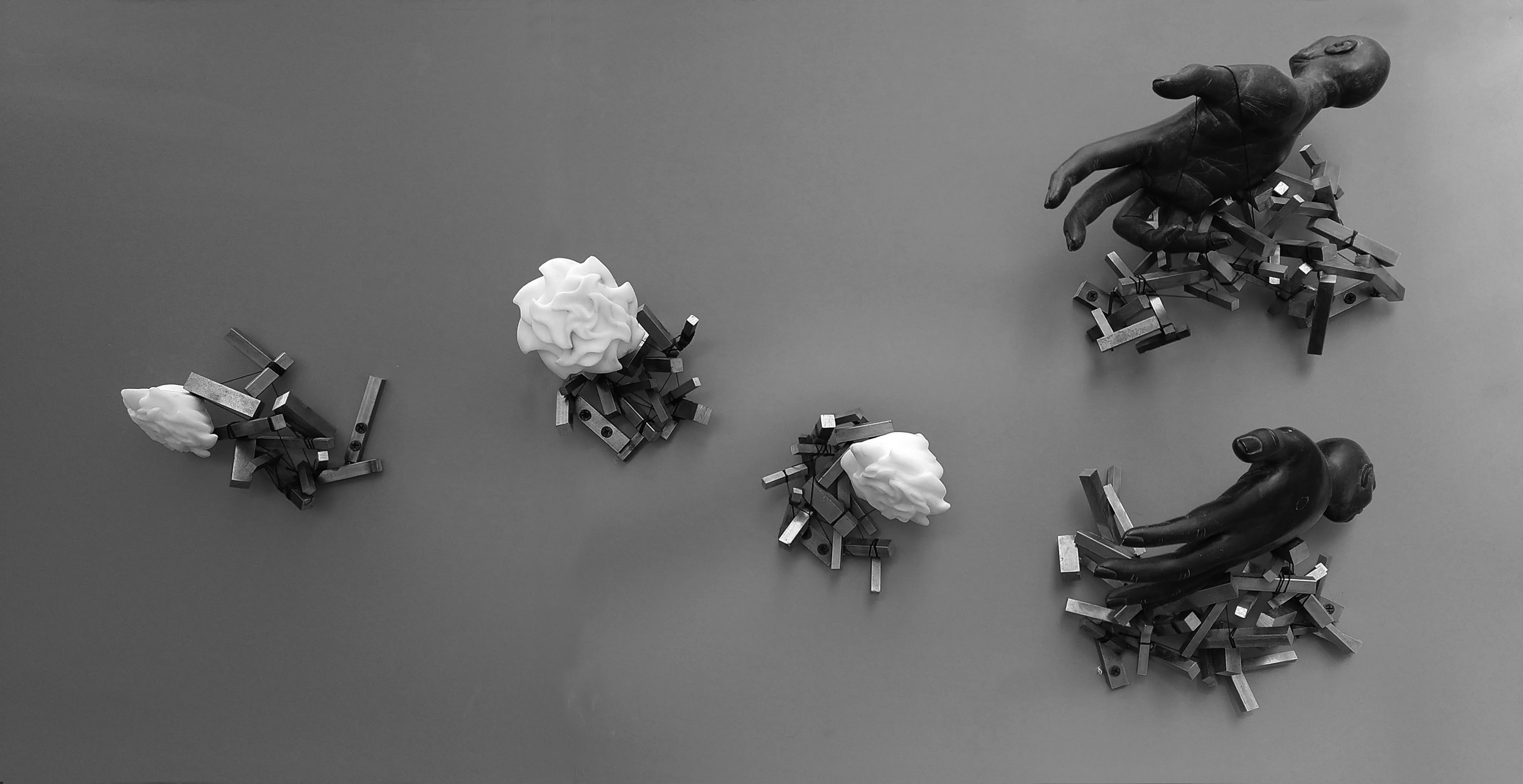