The 9th Annual Symposium was quite the success for 100 artists, who came from all over the West Coast. One of our two guest artists was Tendayi Njagu from Harare Zimbabwe. We were also fortunate to have Kazutaka Uchida from Japan return for two weeks. We had our most successful educational program for those in need of basic carving assistance. The third annual MARIE CARP FUND auction was again successful, bringing in more than $5000.00 for scholarships for the Camp Brotherhood Symposium. The hard work of Pat, Anastasia, Steve, Suz, and Gail, resulted in a fun auction with delicious desserts. 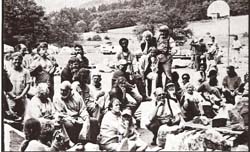 I am extremely proud of what we offer to the community. No other art group is doing what we do for sculptors. We do it very well, and the good word about NWSSA Symposia is getting out! I want to share some comments from the critique forms:

"I love the element of open sharing here. It's a paradise to live the artists' euphoric dream of eat, sleep, carve for one week. I love you all."

"If this energy spreads, there is hope for the world,"

"If we ruled the world, there would be no need for wars." "This was by far one of the best experiences of my life" "It seems like I enjoy more and more every year."

"This was the greatest symposium ever. I think the greatest thing was the many ways we were tested; by the weather, by our expectations, and by each other. We rose to all the challenges, and we embraced them, just as we embraced our brothers and sisters. MY HEART SOARS."

"We had great parties. Thank you Meredith for the music."

Many of the critiques indicated a strong interest in changing to a lO-day format for 1997. The Board met and endorsed iliat idea, and has approved a 10-day Symposium for next year at Camp Brotherhood The 1997 dates are from July 18th to 27th. We will address all your concerns regarding the sleeping accommodations, food, and the rain. We will begin planning for 1997 in Sept. If you have any ideas for that program (topics, instructors), please write to me before Sept 1st. Send your comments to 5580 South Langston, Seattle WA 98178.

Many thanks to all of you who attended and helped make this event such a success--not for NWSSA, but for the individuals who were there. It is rewarding and heartwarming to see artists working side by side. We come from such diverse paths, we set up camp, carve all day, enjoy one another, and return happy and exhilarated. Each and every person attending contributed to the success of all.

Thank you. Hope to see you at Lake Cowichan in September!!!

The Northwest Stone Sculptors Association and Richard Hestekind have teamed up to create a sculpture garden and courtyard for the Northwest Flower and Garden Show in Seattle. Guests will experience the power that stone and metal sculptures radiate when placed in a garden setting designed to do them justice. Guests will walk along a stone path, through a landscape of beautiful plants and trees. They will pass a reflecting pool on their journey to experience a contemplative courtyard, where the clean, cool water in a stone fountain flows, waiting to soothe their weary souls.

The Northwest Flower & Garden show is an annual event that averages sales of fifteen thousand tickets a day during the five day event. For the last six years the NWSSA has excited the public with information and sculpture at their educational booth on the sixth floor of the Washington State Convention Center. Tracy Powell is the coordinator of the exhibit this year. This is a wonderful opportunity for us to educate the general public about stone sculpture design, placement, and materials. Artists will take turns at the booth, speaking to the public about their personal vision and that of the NWSSA.

Richard Hestekind is the designer and driving force behind the NWSSA Garden Display. Steve Sandry is assisting him. 1997 will be the third year NWSSA has been invited by the Flower & Garden Show coordinators to create a garden, that has an emphasis on combining sculpture with landscape design.

NWSSA members send a big thank you to Rich Hestekind. It is due to his talents as a landscape designer, and his loyalty to NWSSA, that we have this opportunity to educate the public in such a dramatic manner. NWSSA also thanks the approximately twenty-five artists who have loaned us sculpture for the garden and educational booth displays.

Richard Hestekind extends his personal thanks to Marinakos for supplying the garden stone, Landscape Design Center for the specimen trees and shrubs, and Meredith Earls for her excellent work on the brochures and publicity for this event. Tracy Powell and Rich Hestekind also acknowledge the NWSSA volunteers for their work on creating the booth and the garden. Without their creativity, organization, and hard physical labor, this event would not happen.

All in all, the 3rd Silver Falls Symposium May 22-26 was wonderful, somewhat spontaneous, and well done. Of course I have a biased opinion because I was one of the staff members. It was my third Silver Falls Symposium AND I only live 21 miles from the park. (You can see the logistics I'm working with.) The off-and-on rain could have made everyone irritable but it didn't. People alternated moving further under their tarps, going for a cup of tea or coffee, or going to their room for a nap. The mosquitoes and no-see-ums could have made everyone miserable when the weather warmed up but they didn't. We all used bug spray and commiserated while scratching.

The auction could have been ho-hum for "old-timers" and confusing for new people, but it wasn't. Maybe the free wine furnished by Sudha Acher helped, but it was a rollicking good time even for the old diehards who really dreaded it (you know who you are). To add to the fun, as a spotter I was supposed to nick anyone who moved at all , but everyone was rolling in their seats so much I gave that up immediately. Terry Kramer as auctioneer made the auction an absolute joy, with smooth support of Anastasia Miller, Jonas Blaut, Kathy Ellis, Penelope Crittenden, Kathy, me and all the volunteers who carried armloads of donations to the other building after dinner so we could set it up. $962 was raised and someone threw in the balance to round it up to $1,000 so we were all really pleased for a first auction. Everyone was ready to pack George Pratt into their car and take him home with them after the symposium. His eager, ego-less presence was felt by all. I had asked Thomas Miller to bring some obelisk-shaped"scraps" of white Colorado marble with him for me to purchase for a specific sculpture in mind. He bronght and quickly sold five 2-3 foot stones that had an average footprint of 5" x 5"! The stones were so sleek it was exciting to realize you had very little to remove to get a finished sculpture.

Back for a third Symposium, Duffy Stender from North Bend, Oregon, was so fascinated by one of the stones, he purchased it and, on the way back to his carving site, this SOAPSTONE carver realized he had no way to carve it! So he went tu John Pugh's truck and purchased a die grinder and "fell into the stone." It was a joy to listen to him marveling at the way the light moved through the stone and the exquisite shadows it cast. Kathy Ellis (another staff member and purchaser of one of the obelisks) and I wondered ifwe could get pictures of the five different resulting sculptures just tu see how different they all turn onto If we succeed, you'll see them io a future issue.

Instructor Bud Egger brought a figure in progress io limestone to show his process of transferring a workiog drawing onto stone. It was an inspiration to see the four tiny hand tools he uses to attack huge pieces of stone. (He doesn't use power.) He told Karla (the Symposinm registrar) her translucent white alabaster face was "gorgeous" and I honestly think the woman floated the rest of the day. (Funny, I had told her the same thing but it didn't have that effect.)

I saved the best for last - my massage with Carolyn Anderson the last morning when everyone else would be busy. She was set up in the lobby of her lodge. I really needed and was looking forward to my first experience under her infamous fmgers. Very scantily clad, I slid under the covering and fell under her spell when IN MARCHED THE CLEANING CREW!!! It seems checkout time was 11:00. They threw open the doors to the rooms, mice iocluded, with all my stuff still unpacked, and started cleaning. Karla (a registrar's work is NEVER done) piled my things on the lobby couch while Carolyn and I stoically pressed on, stobbornly oblivious to the noise and complete lack of privacy. Finally giviog up, I slid from under the covers, grabbed a handful of what I hoped were the right assortment of clothes and dashed to the bathroom to dress. Talk about an anticlimax!!

The drive home took me 25 minutes - a tough transition from TOTAL freedom to total reality. As I unpacked each of the treasures I'd bought, traded for, or been gifted with, I thought about the time I'd been given among people who make me feel normal, who speak this wordless language of sculpture, and who, just like me, peer into stones to see themselves.

NOTE: At Camp Brotherhood the following month, I was asked by many how Silver Falls "compared." The Silver Falls Symposium differs several ways: fresh, fluffY towels each day; your bed made everyday (every third day with fresh linen); incredibly delicions, nutritions meals that spoil everyone (including vegetarians) starting with breakfast at 7:00; clean modern lodges that sleep approximately 16 in each (two per bedroom) and have large bathrooms (one men's; one women's); lobbies in each one with comfortable couches! chairs and readiog lamps and stocked fireplaces; free bicycles and helmets provided for exercise; miles and miles of exquisite trails among old growth forests and streams (the nearest falls are 172 feet high with an easy trail goiog behind the falls for a spectacular view); and a wonderful calm that seems to come from the air itself. There was only one large compressor so the noise level isn't quite as "throbbing" and John Pugh from Steatite is usually the only stone vendor, though with a lare selection of stone and tools. The camaraderie, energy level and exchange of ideas are the same, but the fact there have been fewer people meant you get to know everyone. The weather is still relatively cool and it gets dark earlier, but this makes for nice gatherings in the meeting hall, lobbies or fire pit. The capital city of Salem with its historical attractions is only 23 miles away, but the "public" is curiously absent at the actual symposium site.