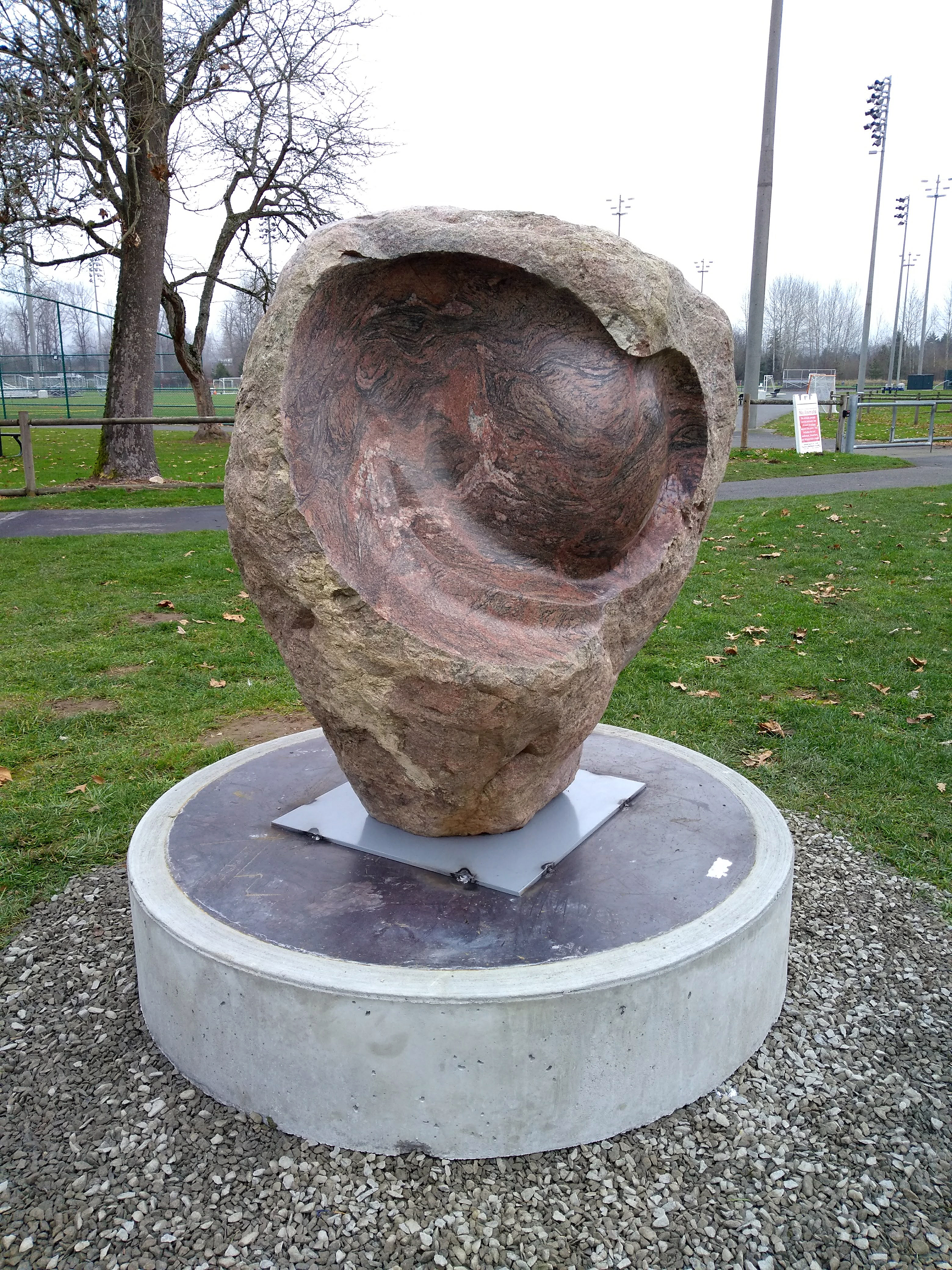 December 2019 marked the culmination of more than four years of work to bring stone sculpture to the King County Parks system.  It is with pride that I announce the installation of our first two sculptures for a rotating Public Art in the Park Exhibit managed by NWSSA.  You should all recognize "Seedling" by Kirk McLean since we featured it on the cover of our latest November-December issue.  If you’ve been to Freeland Studios on Whidbey Island you will also recognize "Three Faces" by Sue Taves, carved in red granite. 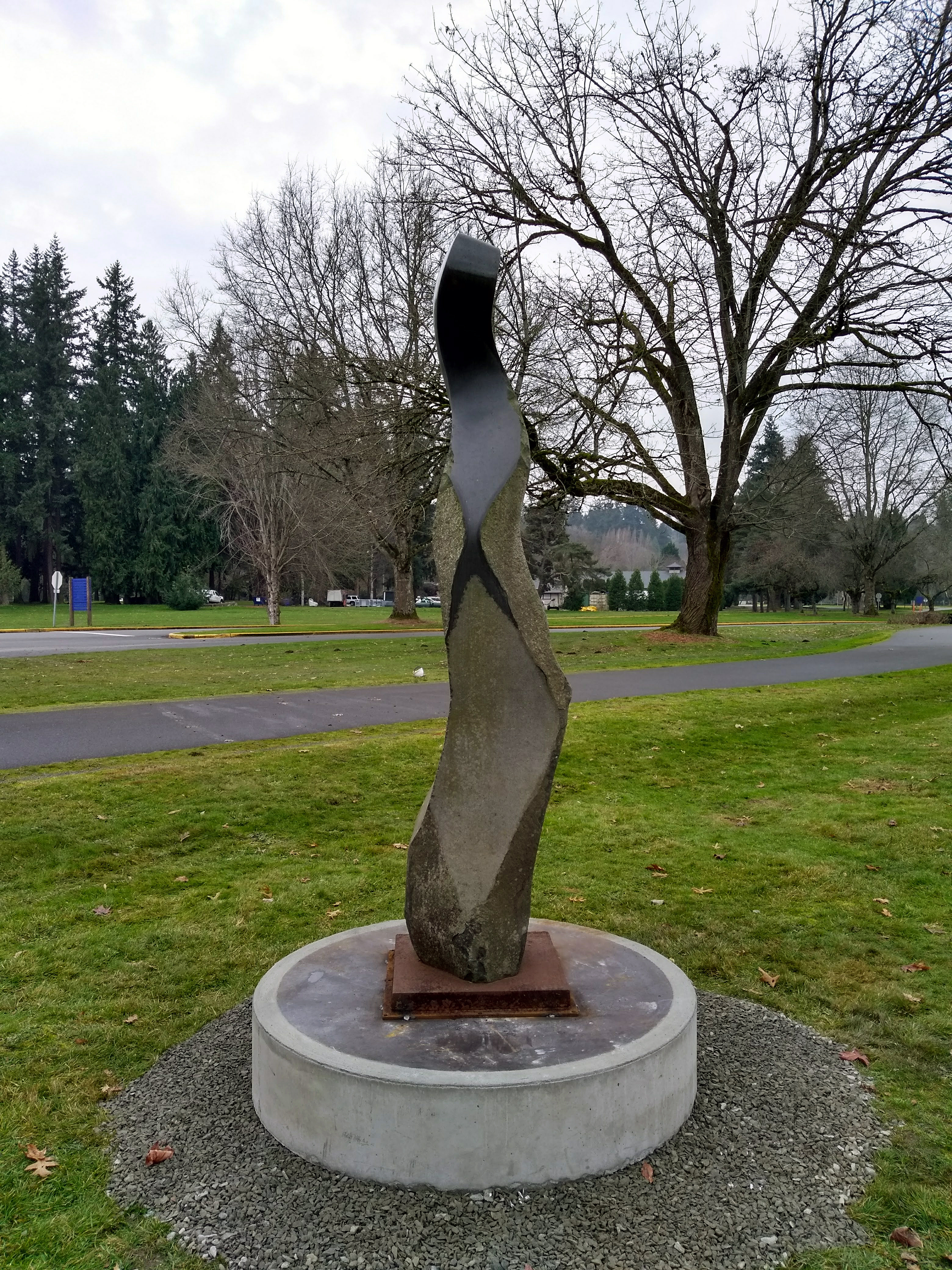 What is the Public Art in the Park exhibit?

These two plinths and sculptures mark the first step in a pilot project for NWSSA to manage a rotating public art exhibition in King County Parks.  It has been developed with support from 4culture.org, and from the Community Partnership and Grants (CPG) program at King County Parks.

This is a new project and we have designed it carefully for flexibility.  We have moved slowly and maintained the ability to pull the plug at any point.  Should this stage continue to be successful, in 2020 we expect to add five more plinths and sculptures for display at Marymoor Park.  The locations have been pre-approved, and the concrete plinths are built and waiting on-site for installation.  The main goals of this project are to provide the public with better access to stone sculpture (thereby building sculpture appreciation), support stone sculptors by creating a new exhibition venue, and to help artists sell work and gain public art experience.  We anticipate rotating the exhibit every 1-2 years to keep it fresh and energetic.

How did we get here?  What was the genesis?

Recognizing significant overlap between the goals of NWSSA and the goals of local parks, I embarked on a mission to combine our efforts on a mutual project.  We saw many possibilities, but the one that kept gaining momentum was the idea of putting monumental stone sculpture in King County parks.  As I aspire to build a career in public art, I realized that there are limited exhibition opportunities for large stone sculpture, that some NWSSA artists already had beautiful sculptures sitting in storage at their studios, and that we might be able to create a low-cost rotating public art exhibition by borrowing ideas from similar programs. 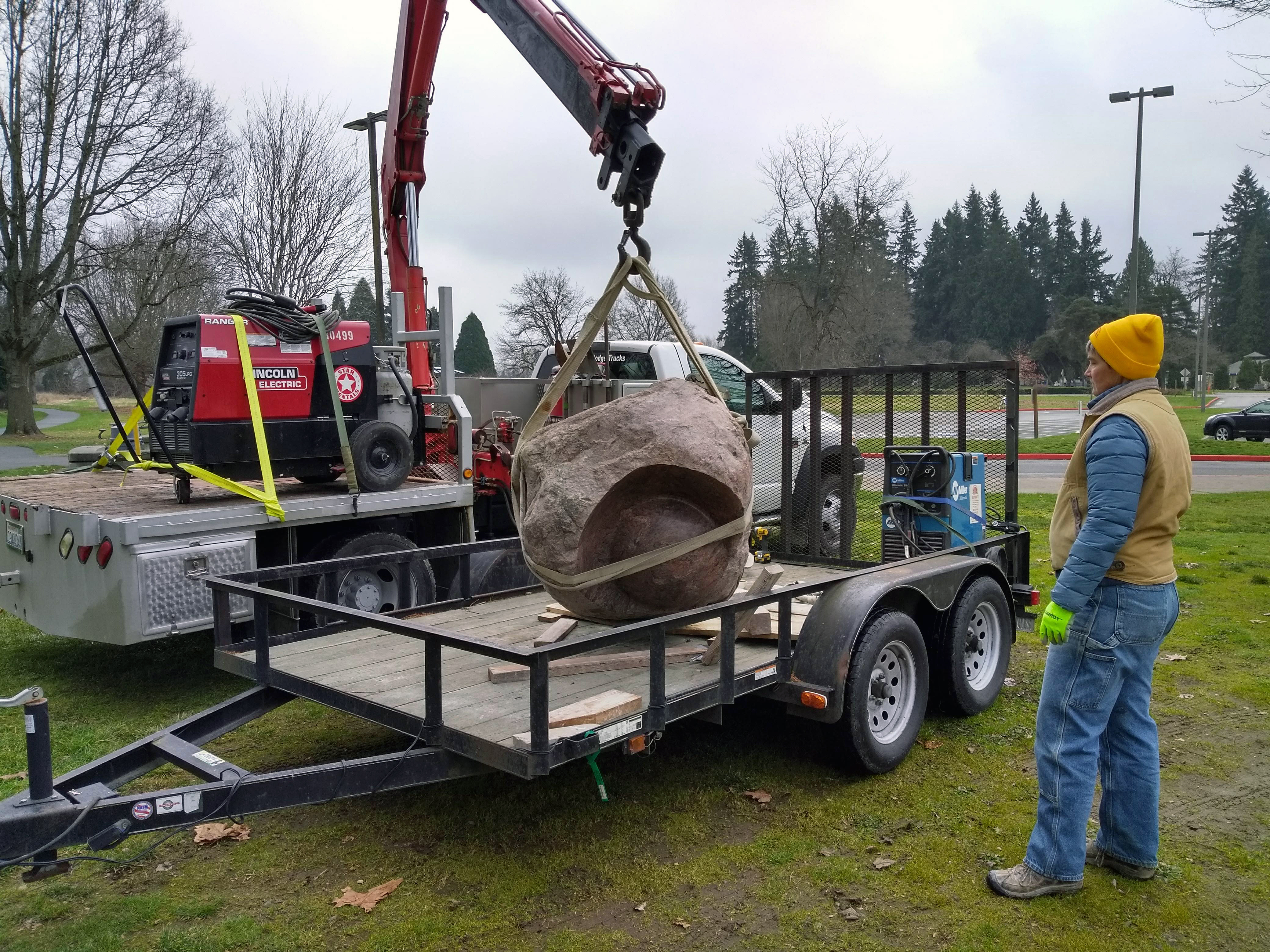 In 2015, I was in my second year as Symposium Director for Camp Brotherhood.  I had invited King County Parks to send someone to see what NWSSA is all about.  At the last minute I got word that Scott Thomas, a CPG program manager for the parks, had received our invite and would be driving up to visit for the day.  Scott was impressed.  He understood what we were motivated by, and he has been a champion of this project the whole way.

In anticipation of eventually signing an agreement, I knew we needed financial support and applied for 4culture grant funding, for which NWSSA has been awarded $9400 over a period of 4 years.  We are extremely grateful for this support since it has allowed us to confidently move forward with development at Marymoor Park.  As we steadily worked towards a signed agreement, receiving the 4culture funds helped launch other vital projects such as the Kubota Garden partnership, which to date has provided 300 youth with free stone sculpting experience.  The Marymoor project was further made possible with direct financial support from the CPG program, which approved up to $8000 for the anticipated material costs to build the steel topped concrete plinths.  We borrowed advice and ideas from the Arts Council of Lake Oswego from their Gallery Without Walls rotating public art program, where we acquired knowledge about insurance and contracts and also got the idea for the steel plate tops.  These tops will give our artists considerable flexibility when installing, requiring only that the sculpture arrive with an attached steel base that can be welded into place. 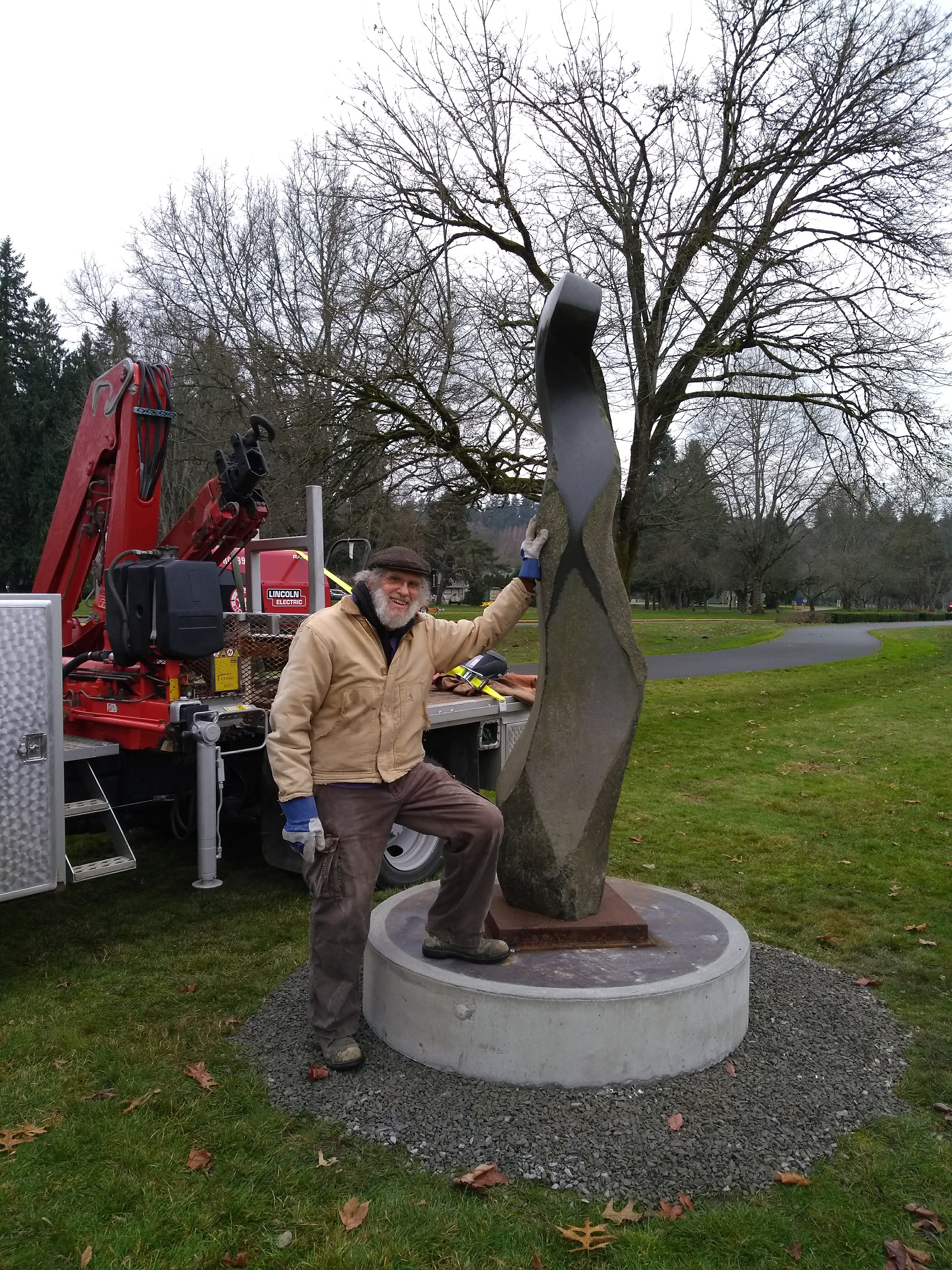 Let’s keep up the momentum! 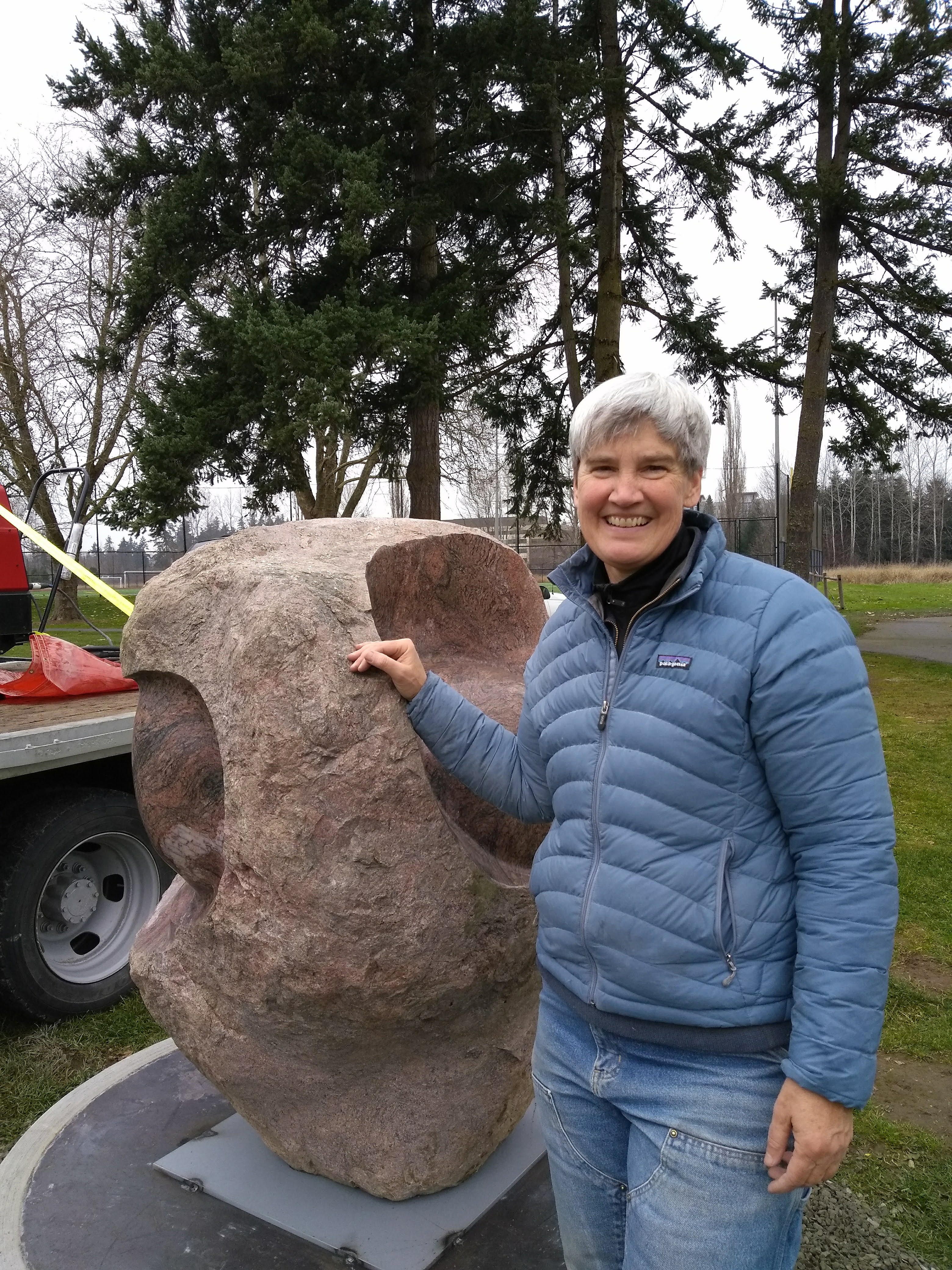 This new venture offers the benefit of highlighting NWSSA members, promotes stone sculpture as a living medium, and enhances the community that we are a part of.  There are several park managers interested in this project, and it was only due to its many advantages that we started with this one; Marymoor Park in Redmond is a beautiful venue with 640 acres and many accessible flat areas with good visibility, and it has a shocking 3 million visitors annually.  In the long term, we hope to make sculpture sales and use the commissions to support program expenses and expansion.

I am so grateful to our many supporters in getting this project put together.  Special thanks are due to Scott Thomas from King County Parks, Norah and David H. from Marymoor Park, and the Friends of Marymoor Park advisory committee.  Ken Barnes and Pat Barton often joined me for site visits, meetings, and more to make this happen, and the rest of the NWSSA board has cheered us on.  Ken did some additional work by getting an engineering consultation donated, and ordering the steel and welding anchors to embed in the concrete.

Of course, we owe an enormous Thank You to the contributing artists and installation helpers!  In addition to Pat and Ken, Craig Breitbach was a big help on the site-prep and installation days, and Lloyd Whannell helped deliver Sue’s sculpture.  We put Sue’s ample welding experience to work, and after all the sculpture shuffling we finally let Kirk take a break - at which point he promptly sat down and took a nap (pictured). 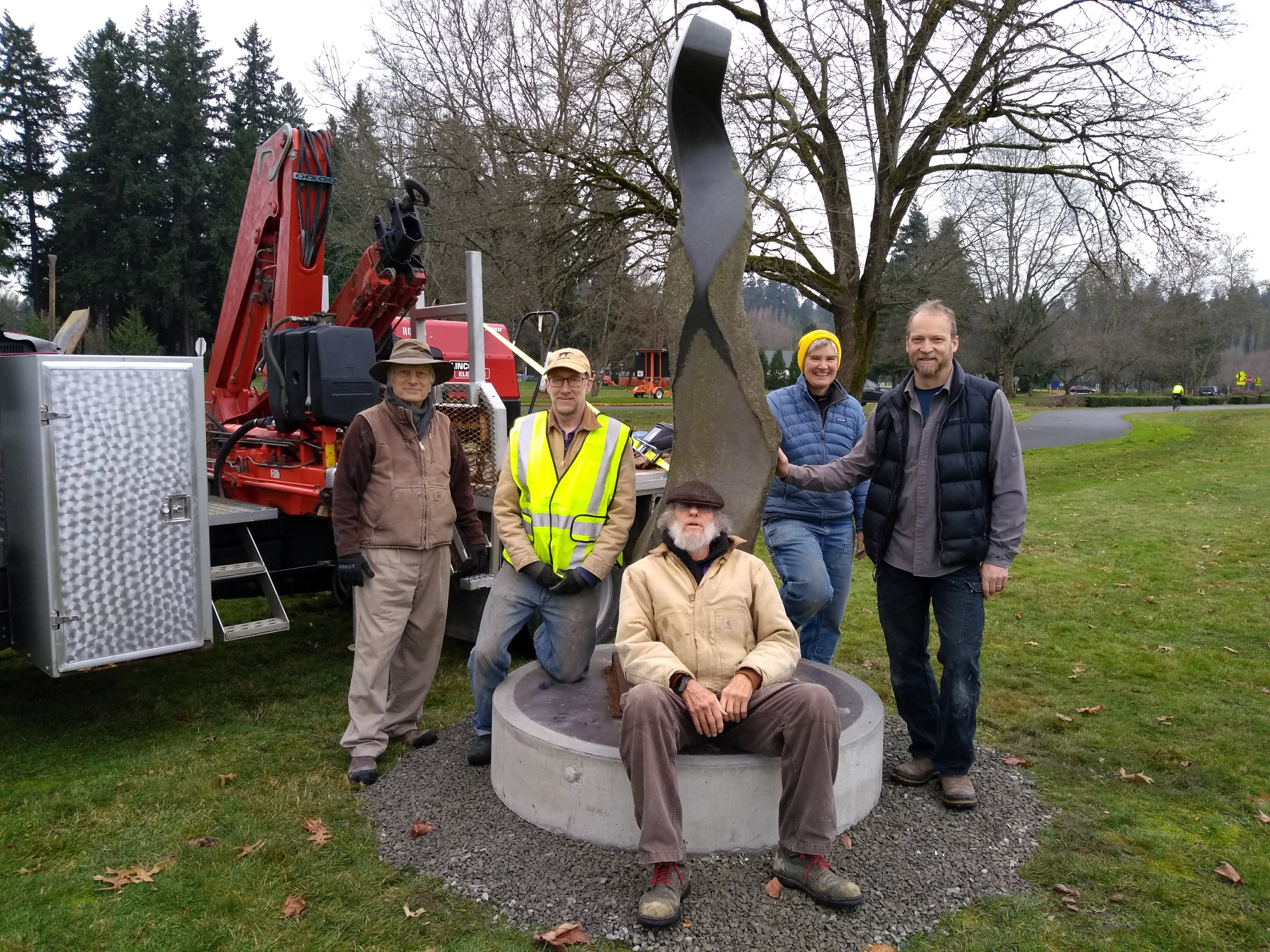