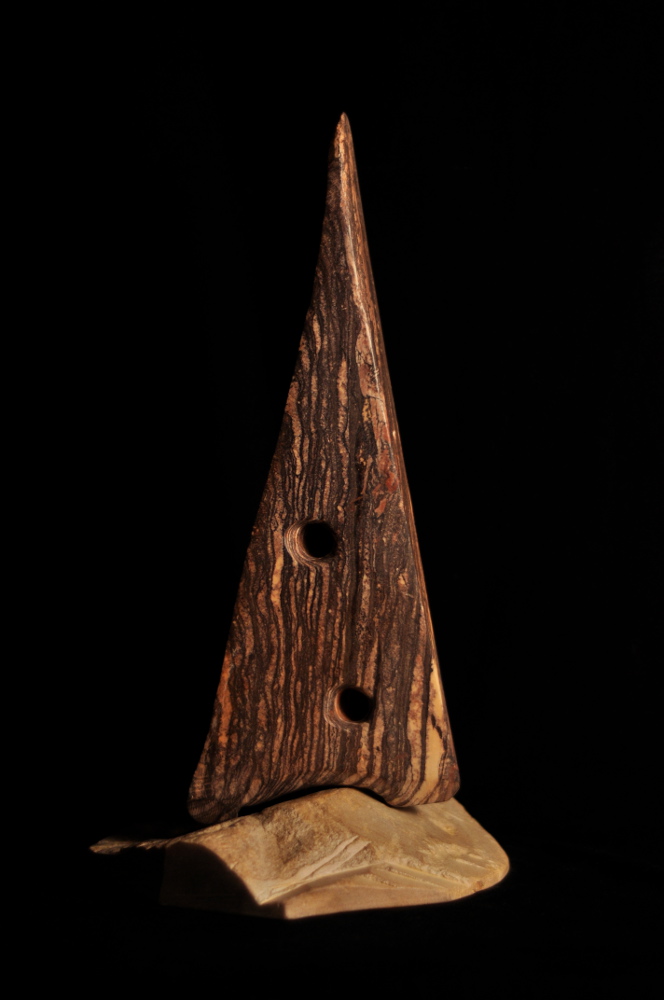 My goal is to get across that not all sculptors are grade B+ or better. Many of us are just happy campers, sometimes, doing our thing and feeling fulfilled. My article is not a standard question and answer, but a mini-autobiography. The photos are mere illustrations. With the latest technology one could get better and bigger pictures but they will never get close to the feeling of the real sculpture. I hope you will look upon all this as a sincere effort in my individual style.

My name is Dirk and I was born in Holland in 1932. Besides all the things mothers do, mine was good with crafts, leatherwork, wool and so forth. My father, My father, in his free time, was an antique furniture maker. Hand tools only. So I grew up between sawdust, bits of leather and wool and a taste for beauty and style. My first attempt to express myself freely, artistically, happened when I was eleven; drawing a big tree on a piece of ordinary paper. I thought it was well done but no compliments were forth coming. My next artistic effort was in grade twelve when I carved two bookends, two ships, in Italian nutwood. I remember I was pleased with them. 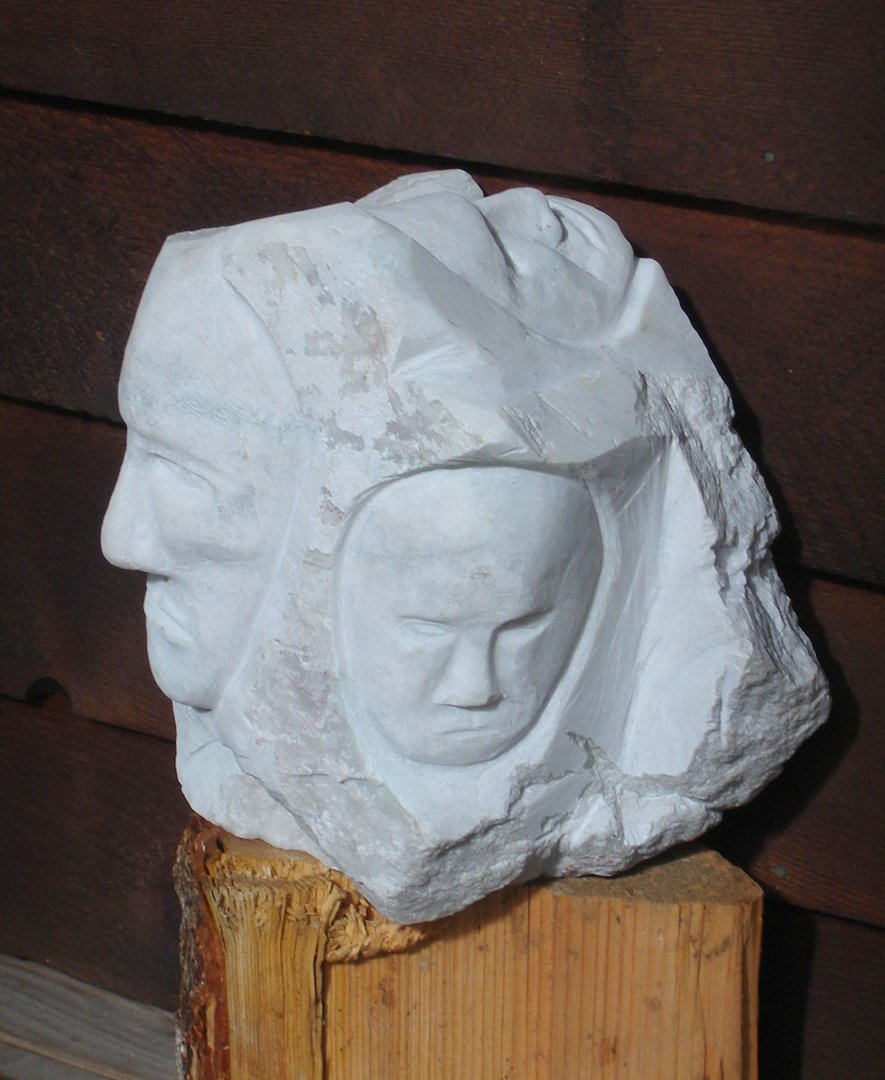 And then a long time nothing. University and medical career, family, and immigration to Canada kept me occupied. Some furniture making in 60's and 70's and later boat building in the 80's and 90's. First canoes, then row boats then a small motorboat. All wood. The boatbuilding seemed to me the first evidence of the rebirth of my need to express myself artistically. But I had to change direction.

In June of 2007 I visited the "Quadra Island Artists Studio Tour" and ended up in the studio of Lee Gass. I told him I was stuck. "Don't know what I am getting up for in the morning. I'm finished with boat building." He says, "You want to try this?" He gives me a hammer and a chisel and a piece of stone. I do get a few chips off but that was it. He suggests I see Chris Rose. He is a soapstone carver of high quality and a teacher in this field.

I went to see Chris and he showed me his setup. Beautiful workbenches, lots of air-pressure and suction. Two months and fifty hours later I finished something, a piece that is titled "Father and Son."

What an eye-opener. I had carved something when I was eighteen, then some ducks in the 80's. Now thirty years later I am writing about my "old age sculpture experience."

So I made half a dozen soapstone carvings including my hand and an orca. In 2008 I was traveling in the S.E corner of BC and found a dolomite mine. I picked up some 100 pound pieces. It was free! Out of one piece came the "Moon." The second piece became the base for "Three Faces": man, woman and child as part of a self-imposed exercise of how to carve a face. Michael Binkley gave me the idea of the mobius. 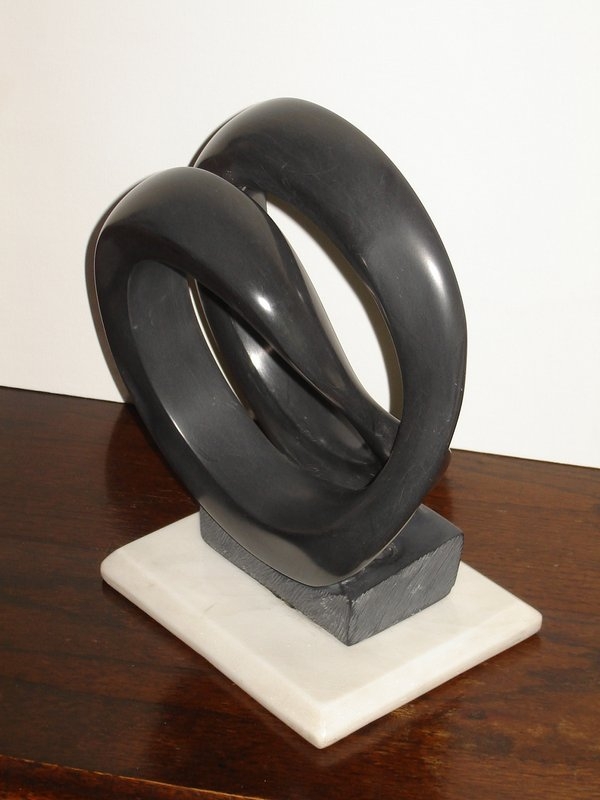 I experience stone sculpture only as pleasure. There are no mistakes, only retakes. It always gets better. The sculpture will be there for you tomorrow, unchanged. Not like music from the piano disappearing as soon as you make it.

I cannot sell anything as I would expose myself voluntarily to a judgment and I am afraid of that judgment. Plus, I like the sculptures too much. On my 80th birthday recently, I gave one carving to each of my five children. That felt just great. My wife has been totally supportive in my endeavors while I support her in her athletic ambitions. I do lay awake at night thinking about my sculptures but that helps my concepts or ideas to grow. There are about three or four projects circulating in my head and in the studio at any one time. 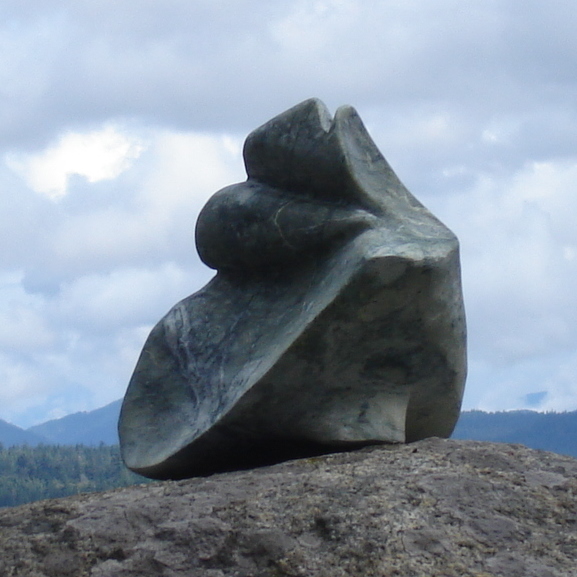 Because of dust, noise, expensive stone and equipment I will stick to stone up to a hardness of 5 or 6 and use no air tools. Stones I use are up to 100 lbs. I use an angle grinder, a die grinder and Foredom plus all the little stuff that comes with them. And hand tools and sandpaper! 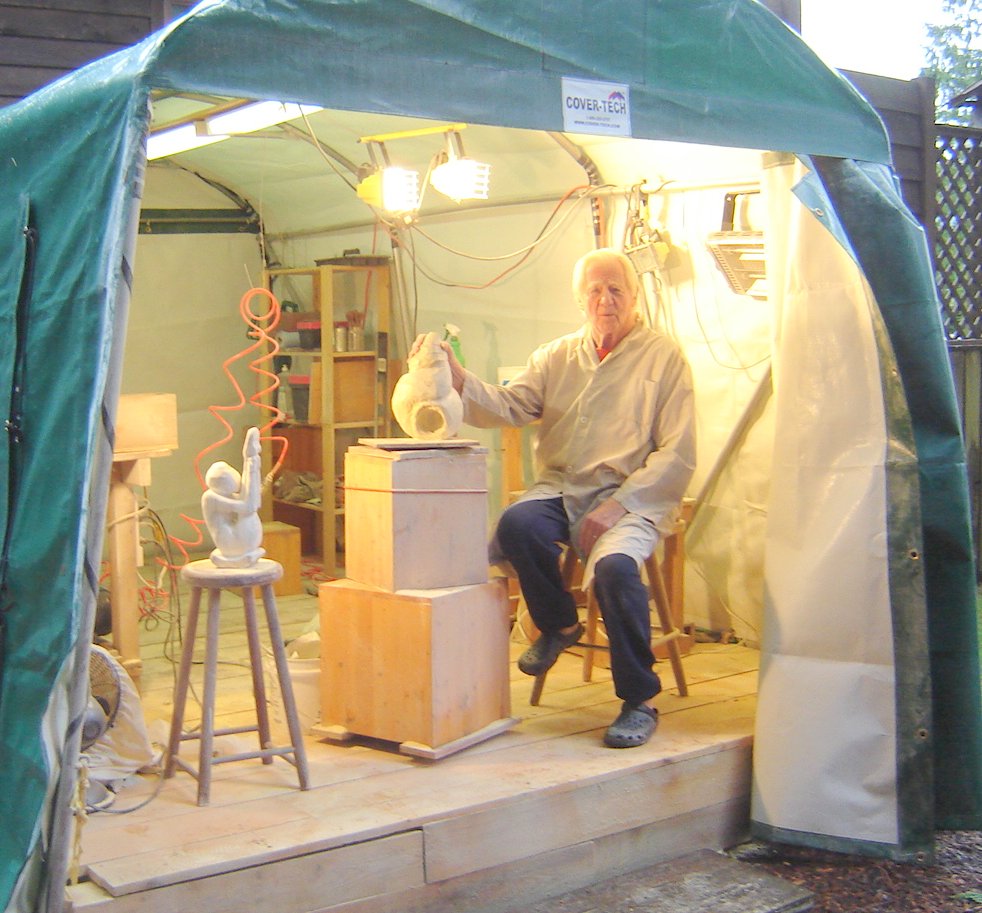 I work in a 10 x 14 steel-framed industrial tent in the back yard and have very friendly artistic neighbors.

We have five senses. I lost my smell after a skull fracture and concussion (2010) but stones don't smell. I have lost a great deal of my hearing but it is not the stone which makes the sound. But I can see, feel and hug my stone.

Camp B has been a Godsend. I went twice, 2009 and 2011. NWSSA has given me an entrée into the stone sculpture milieu which has led to a feeling of belonging and support.

By having incorporated stone carving into my later life, sculpting has become one of several reasons for continuing my existence, to celebrate my being.

I close with what I wrote in the Oct/Nov/Dec 2009 issue of Sculpture NorthWest. 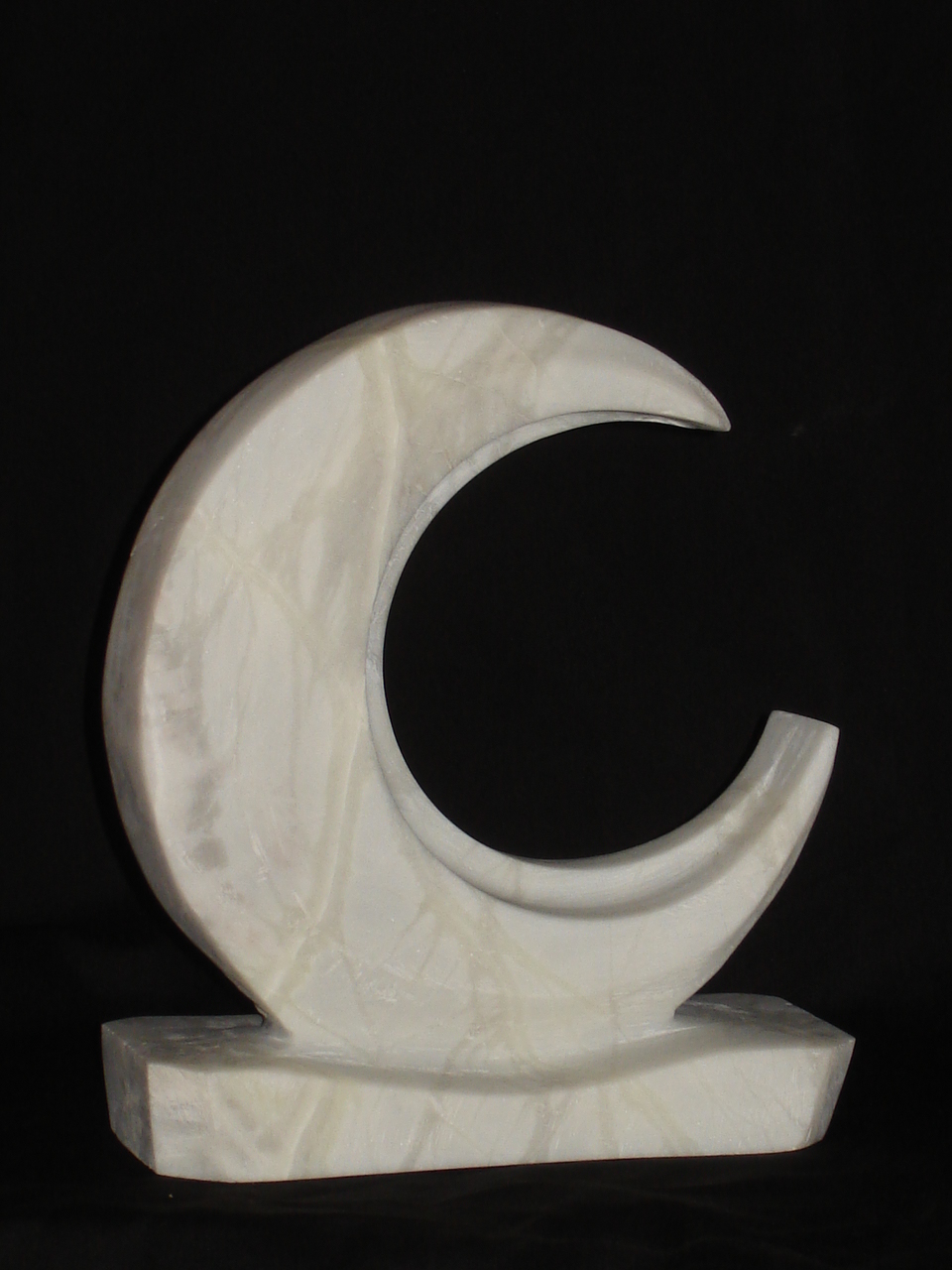 "When I carve I see me and my soul in the stone. At the same time I open my soul to others who wish to see my sculpture and who will, maybe, allow a relationship to form with me and the stone and fall in love with the stone and maybe me. And that is what keeps us together. Thank you all. From a novice. What a week."