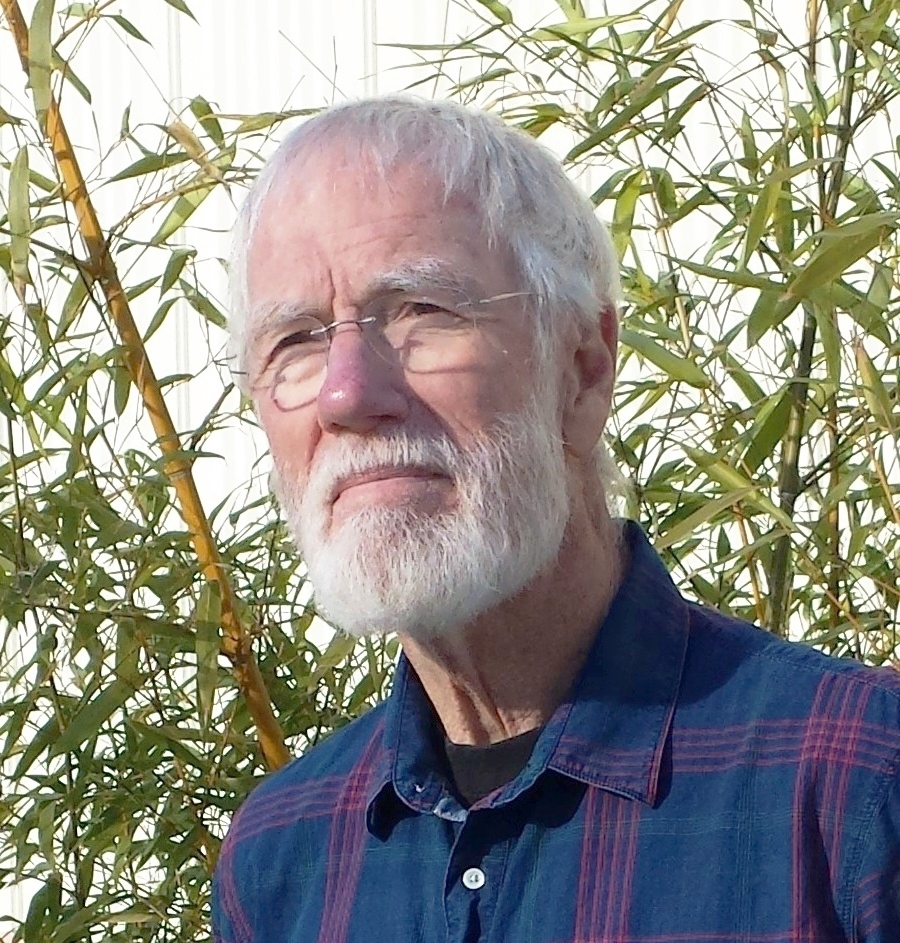 I am the same Lane Tompkins that was in the Artist Spotlight in the January/February, 2009 issue. That time I answered this question with a short, pre NWSSA bio ending with the fact that I was in the process of moving to Whidbey Island. I made that move and continue to live in Langley and am one of a dozen artists working at the Freeland Art Studios, just up the road from Langley.

Since my last spotlight tells about what I carved before coming to Whidbey, Let me tell you now about the completely different kind of sculptures I've been carving since moving. 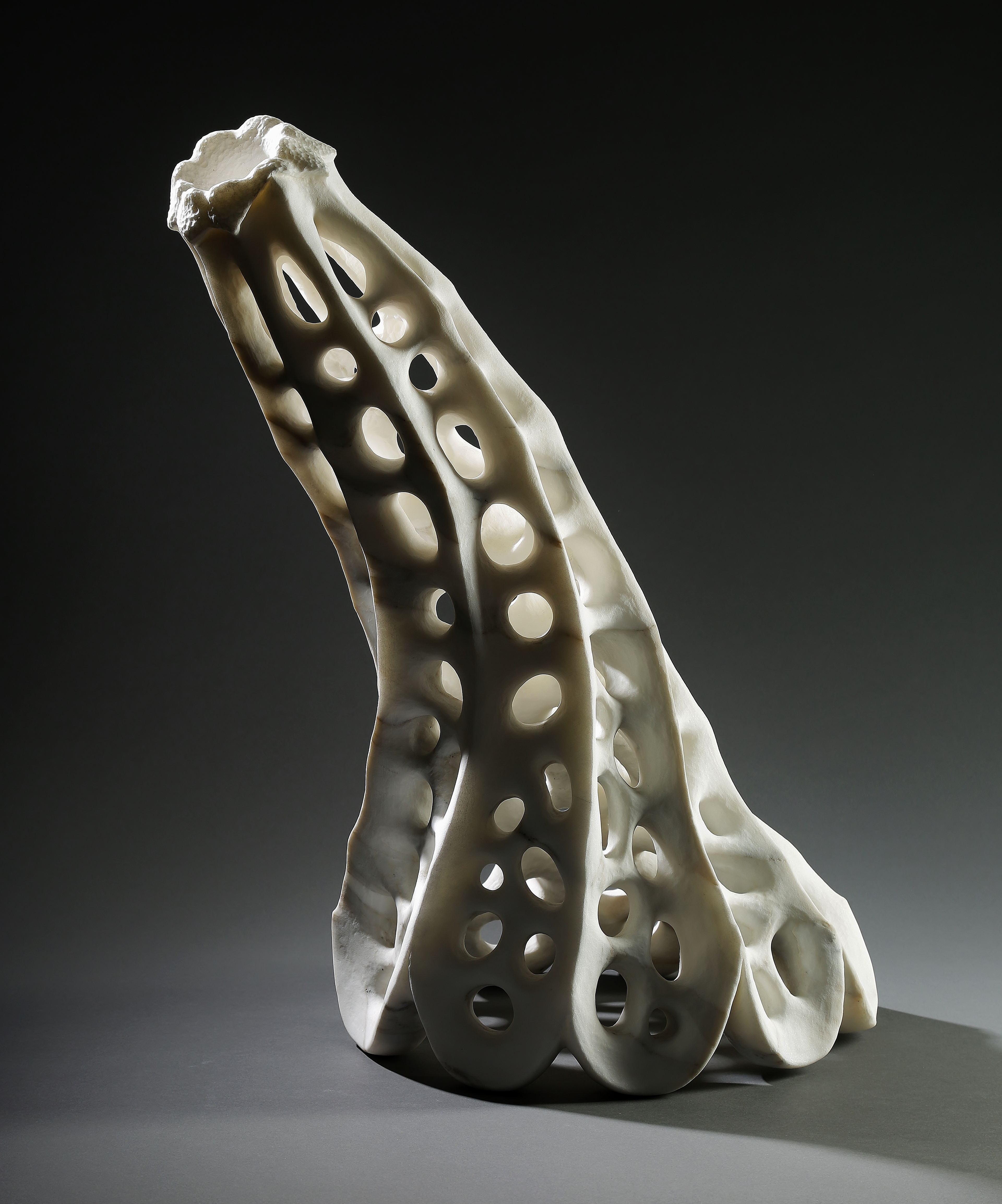 How does your art reflect your philosophy?
I don't think it does very much. I try to let my form-finding do its own thing, at least without too much influence from my philosophy. I come up with a design I like, find a rock that will hold it and begin.

How has NWSSA influenced your work as an artist?
NWSSA gave me my real beginning in stone carving tools and techniques and, more importantly, submerged me in a loving group of friends that helped me get past dreaming and to make art.

Describe your art in your own terms – focusing on your stone carving.

When I sold a horse sculpture (on page 6 of that 2009 issue) at Karla Matzke's Gallery on Camano Island, she asked me to do a horse series. It took me several months, but I got twelve of them carved. They went from single horses up to as many as six in a piece. I was thrilled when people bought five of those horse sculptures.

By this time I was starting to lose my enthusiasm for horse heads. Thanks to serendipity and to Google Images I became entranced with camels. Carving camels in stone and modeling them in clay for bronzes kept me busy for a year or so until I got bored aligning all those eyes and ears.

That's when I got the idea that it should be great fun to just "push" the stone where I wanted it to go, nothing aligned, nothing needing to be copied on the other side. This was to be my second type of carving since moving to Whidbey. I know, lots of you guys have been carving abstracted forms all along, so, in a way, I'm just catching up to you. 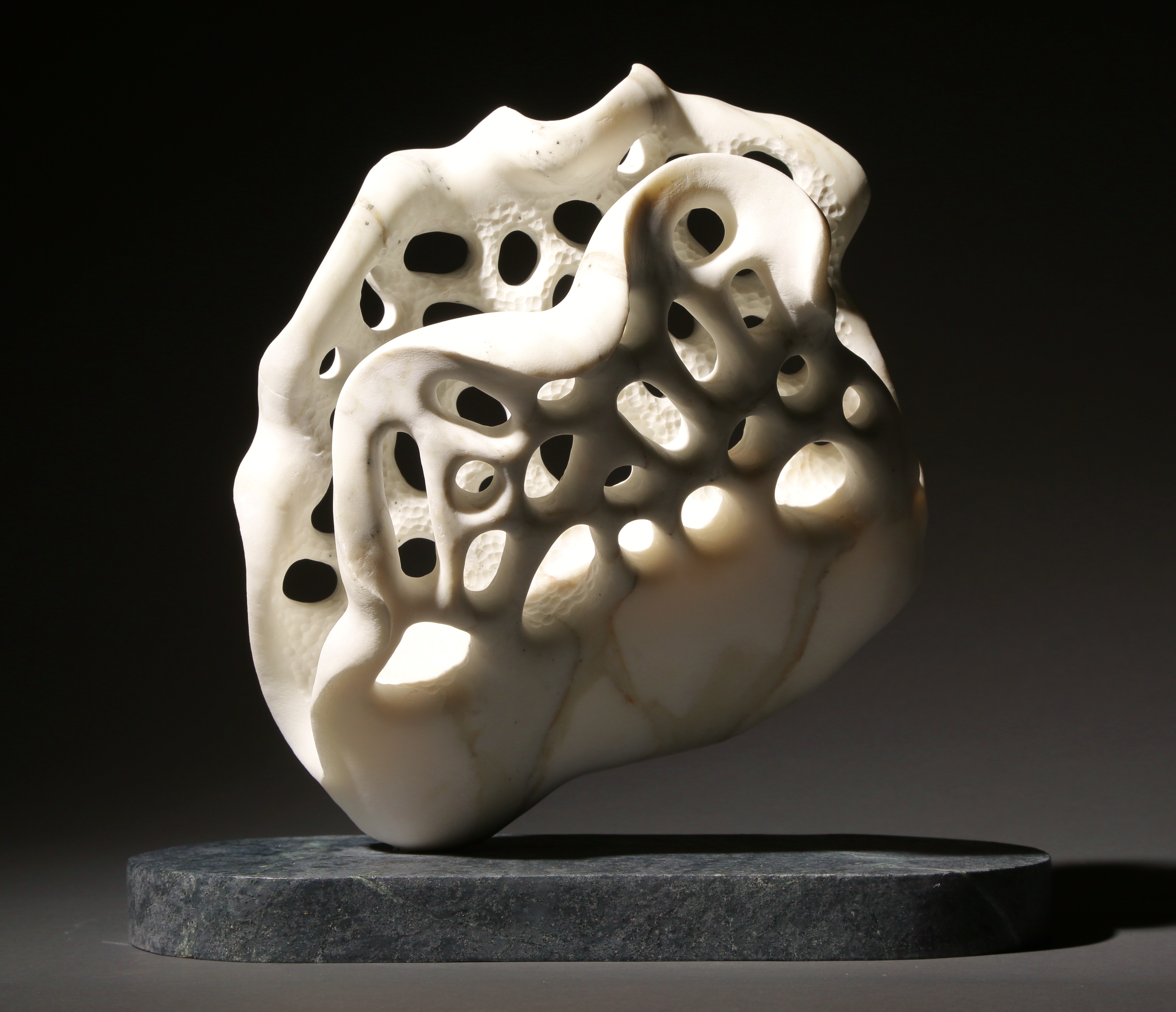 And the third type of carving, what I'm doing now, is what I sometimes call holey stone. I love changing a 180 pound rock that I couldn't possibly pick up, in to a 40 pounder that I can pick up with one hand. I just stick my fingers into the holes, like a bowling ball, and carry it around. I am definitely not talking about a rock with a hole in the middle, I'm talking about cutting holes numbering in the dozens, like eight or nine dozen.

How do you get your ideas?
There is a time between wakefulness and sleep that has been valuable to me. When I'm in that "zone" my mind seems freer to roam around on whatever stone I might give it. I start to picture various forms and do a kind of carving in my mind just to see if they look interesting enough to actually cut. Often they do not, but when something does stick, then I can choose a stone and get to work.

How is your work area set up?

I have a small space in the large Freeland Art Studios building. We now have 12 artists working there. I love the interaction we all have with one another. In the middle of working, another artist will stop by and we have a discussion about what ever I'm working on. So many of those conversations have helped me to "see" better what I'm doing and how I might improve my method or approach.

Describe some of your recent work.

I carved ROUNDABOUT in Italian cloud alabaster toward the end of the horse series. As you see, what I call a horse is really a horse head and neck on an abstract, body-like platform. By the time I got to this sculpture, I could make a few marks on the stone and begin to cut. I like this "direct carving" technique much better than making models to copy. If you compare the heads of this piece with the heads on ROUGHOUTS, you can see the evolution of my horse head design. I like the cleaner look of the later ROUGHOUTS.

FIRE IN THE SKY is the first of my abstracts after tiring of all those eyes and ears. The stone was one of many that my studio mates and I bought from a Southern California dealer. This alabaster is composed of tubular, needle shapes bundled together. The tubular elements allow light to easily pass from one side to the other, giving it that brilliant glow in sunlight. The needles do not make it easy to carve. The edges of this piece, tended to chip if it was sharpened too much. I had to blunt this edge more than I wanted to keep the needles from chipping. I love that this stone looks fractured, but still holds together nicely. And I prefer to see the small, dark clay inclusions as "beauty marks" rather than blemishes.

CLERIC was inspired by a ramble through elizabethturksculptor.com. Post Turk I just had to try my hand at removing almost all of the stone; finding out if I could do that and still keep the integrity of the shape.

The stone for CLERIC was most of the bottom half of the flower piece I called SPRING CROCHET that I carved from a 1200 pound piece of Calacatta de Oro bought at Art city in Ventura, CA. When almost finished, CROCHET fell over and snapped in two. I certainly didn't think so at the time, but this turned out to be a good thing. The flower is better without the bulb and I got to use the bulb for CLERIC and for the smaller CORAL LIPS.

I began shaping CLERIC with an angle grinder and finished up with a die grinder using various 30/40 grit, electroplated, diamond burrs. Cleaning out the center was a real chore, especially up at the narrowing top.

What is the major theme or intent of your art?
I have only recently discovered my connection with Antoni Gaudi, the 19th century architect from Barcelona, Spain. I believe I have subconsciously been channeling him for years. In most of my work, especially in CLERIC, I can see his flutings and twistings of chimneys and roofing on his Palau Guell and the Casa Batillo.
Studying Gaudi's organic shapes and subtle curves has also helped me understand that the kind of thing that usually sets me to carving is the challenge to carve it, not the pursuit of art.

Do you work part or full time as an artist?
Definitely part time. 3 hours at a time most days of the week.

What stones do you prefer?
In the fifteen years I have cut stone my choices have been alabaster, limestone, chlorite and steatite. And now, of course, it's Carrara marble. Not so soft as to be fragile and not so hard that my burrs can't cut it. And Carrara holds together beautifully, even when I dare to cut most of it away.

What tools do you use?
An angle grinder with a flush mount electroplated, five inch blade and, my favorite, the die grinder. I love working a ball shaped or a cylinder shaped burr down into the marble. I also use a large silicon carbide burr.

What have been your satisfactions in your life as an artist?
The big thing for me has been the therapeutic effect of working stone. Had I not stopped by Silver Falls on a whim sixteen years ago, I might not be doing the only thing I've ever really wanted to do, the thing that I feel I can do to my full ability. I just love finding the forms. I can do pretty well modeling clay, too, but nothing can serve my soul like subtracting stone from whatever I think is down there inside.