has many large erratic granite boulders that have traveled south from the Scandinavian mountains during one of the ice ages eons ago. In they are called Findlinge which literally translated means foundlings. A good number of these old well-traveled boulders have been venerated by people from time immemorial.

In the late Stone Age communities built large ceremonial buildings and huge graves with them (some boulders as heavy as 40 ton were used). In the times since then, they have been part of the village life, often been given a name, and important ceremonies were held around them. In , resides one giant flat-topped rock on which the surrounding villages still celebrate their weddings.

These days the law has put most of the large stones under its protection, yet there seem to be enough left over, or newly found in gravel pits, for Ben Siebenrock and very few other German stone sculptors to make sculptural art out of them.

Ben calls the meanings attached to these Findlinge boulders their "special cultural context" and he says that this sentiment is the core of his work. He assumes in his correspondence with me, that this ancient cultural context exists here in the Northwest. If it does, it's very faint. So far I have only seen two examples of ancient boulder work, both of them large bowls for water.

Be this at it may, we, the stone sculptors here, are working on creating a cultural context for future humans to read and connect to. Also it seems to me, that stonework supersedes regional and national culture, even seems to leap across time and distance limitations.

Ben Siebenrock lives and works in Northern Germany, by Kiel, a ship building, port town about forty miles south of the border with Denmark, and he is my 'foundling' of the year 2009. Since August of that year he and I have had a wild and whacky e-mail exchange, corresponding every two days, or so.

Here is a translation from German of one of his statements: "…but the one who is able to shape the stone, is also able to do much more. This person forms him/herself through hard work, discipline and imagination, and that makes the artistic work so valuable for society. We can glorify political hierarchies, we can ignore them, or tear them down, but our works are touchable and by that fact are honest statements in contrast to certain industries, which are indifferent to the emotional poverty of the people, who foggily inhabit the virtual worlds….." 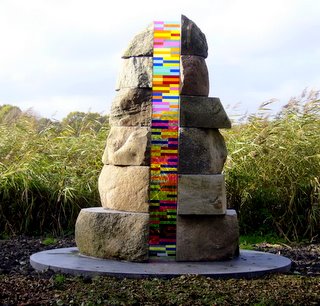 He was born in 1951 and studied sculpture beginning 1975 for two years in with Jan Koblasa (whose work I have seen and am a fan of); his next teacher was Emil Cimiotti in Braunschweig. Ben worked on his first public sculpture 1978 in . He was leading a sculpting studio in 1980 in and teaching sculpture at the Fachhochschule (a ) in in 1990 - each for two years. Furthermore Ben has taken part in many symposia and also organized a number of them.

Ben Siebenrock came to granite in 1986 – or perhaps it came to him, when he was shown boulders in a quarry. He then realized that his contemporary stone sculptors did not use the native boulders, instead they imported their stone from . He writes, that he regrets that he had not started earlier with working granite boulders, a sentiment I can heartily identify with.

Here is a quote from Ben about erratic boulders: “Erosion has its own aesthetic. It is expressed in hard rock down to the smallest crystal structure and the non-reproducible surface, which is created by wind and water, by friction and temperature changes. Foundlings are real individuals, although some boulders that were found far apart seem to belong to the same geological formation.”

It seems to me that of all the many ways Ben uses boulders, his towers or as he calls them Light Towers are the most innovative and beautiful. He sees the material similarity between the glass and the granite and he achieves a gothic lightness of his stone towers by letting the colors shine through their vertical middle. He states that mass and weight of large boulders lying on the ground are nearly impossible to assess, even with a lot of practice; that this, however, changes drastically when piled on top of each other. Apparently only two of his towers are pinned; the others rely in their stability on horizontal groves. Physical heaviness, plus optical lightness define these stone towers. 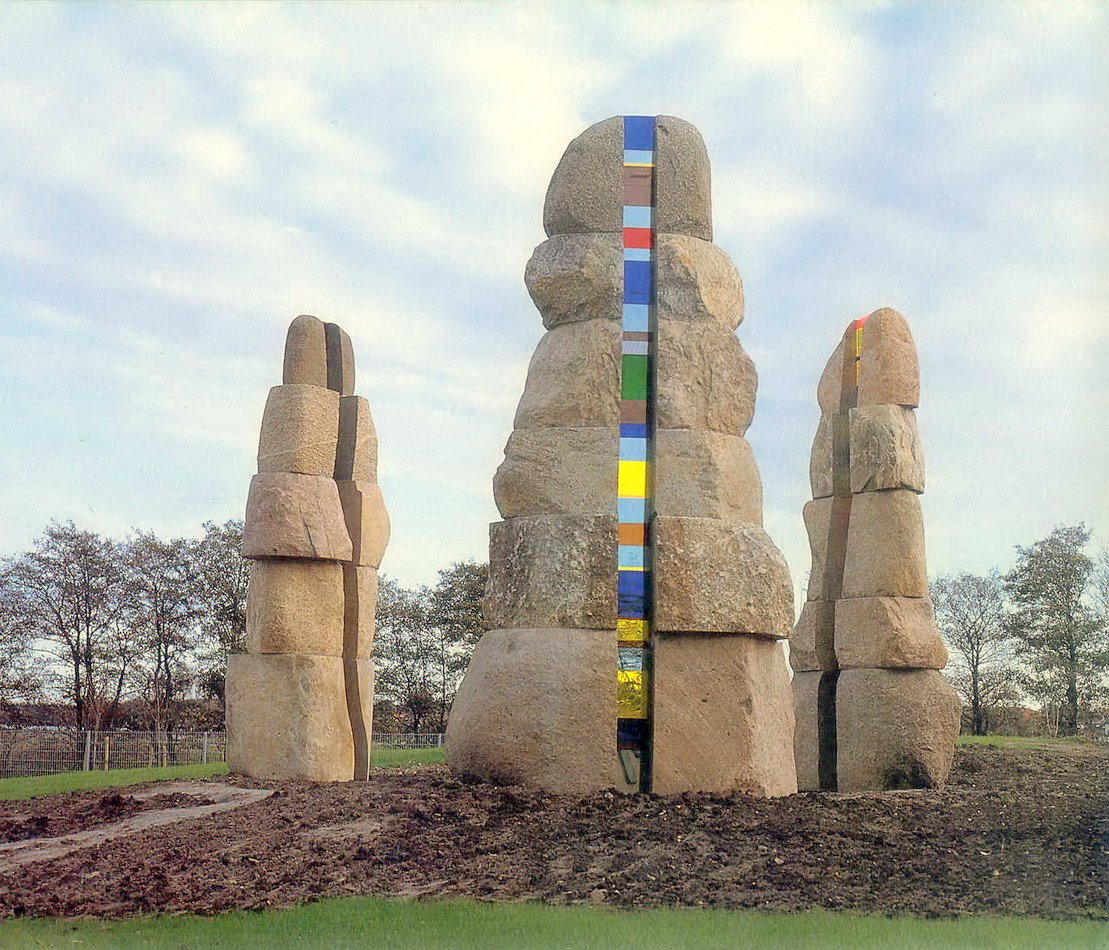 The problem of adding color to my granite stones, which I have been trying to solve for many years now, has been resolved here not by adding paint to the surface, but by using the sunrays to shine with colored transparency onto the stone, changing and moving with the angle of the rays. For future ideas Ben imagines to be able to use his concept for more involved architecture. He writes: “The goal would be an architectural sculpture, in which the spaces inside and outside oxidize in equal measure with the surrounding. The space would not be defined anymore by the sculpture around which one walks, but the observer would stand in its center, surrounded by the sculpture.”

There are several great qualities that define Ben Siebenrock. Of course that he is a stoner connects him with what we love to do – must be a great guy.

The two facets of him that I cherish the most are his sparkling sense of humor that glitters through most of his works, and also the lightness which he is able to impart into the heavy boulders, be it through grooved surfaces, light and color, stacking or even the titles that he gives his sculptures.

Ben, and his wife Britta, might be able to visit us in the Northwest this coming summer and then, hopefully, he will get a little of our stone dust into his blood. For now we send greetings across the Big Drink, and we look forward to meeting this great German stone sculptor, Ben Siebenrock.

Editors’ note: To see more of Ben’s work and read about him as an artist go to: www.ben-siebenrock.de and click on “News: Warder is now open…” at the bottom of the page.