I have often felt that my relationship with stone carving is different from others — that I am somehow alone. I think up reasons for this: I keep doing “touchy feely” pieces, I only do “soft” stones, I use hand tools. 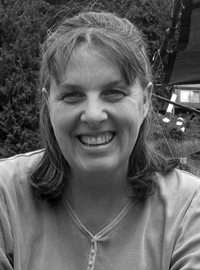 This year at Camp Brotherhood I found out that I was wrong. In B. Amore’s meditation workshops I was reassured that we — the stone carvers — are much more alike than the obvious differences would indicate. As we shared our thoughts around the circle, the dirtiest, roughest and toughest among us expressed truly poetic and often tender emotions about working with stone. It was a much-cherished revelation for me. This relationship with stone transcends gender, age, kind of stone we work on, style, and the commitment we give it in our lives. I felt myself to be one of the group in a way I never have before. Thank you all.

So who are we who do this art? What is the common thread that runs through all of us? Isak Dinesen, in Out of Africa, described the coffee tree plantation where she lived. As she surveyed the fields, she could pick out some rare individual plants that were different from all the others. They had lush foliage, lovely abundant flowering, and put their surrounding neighbors to shame with their size and beauty. The odd thing was that when it came time to harvest the crop, these stand-out plants produced hardly any beans at all. The quantity of beans, of course, was the measure of a plant’s value in the plantation’s working economy. They always allowed a few of the lush plants to remain however, if only for the lift they gave to the soul.

The really interesting part was this: It seems the cause of this profusion of glorious creativity on the part of the plant was that its taproot had hit a stone in its searching for groundedness.  The root bent itself around the stone and kept going, with the result that it produced few beans but wonderful flowers.

It seems to me that artists are like the bent root plants. The creators of great works of art, music, and drama give the world joyous things to look at, to feel, to listen to and to see. We nourish the soul of the world, but may not be the heavy producers in the economy. We, the stone carvers, even go to the extreme of embracing that stone.

I became a member of the Bent Root Society – in appreciation of all bent roots who are creating great works of art. I think that we, the stone carvers of the NWSSA, are somewhat like that. It would make a great T-shirt. Shall I do one for next summer’s Camp B Symposium?