THE CANADIAN SYMPOSIUM ON LAKE COWICHAN…. HAS IT BEEN 17 YEARS?

In 1993 I attended the Camp Brotherhood symposium and wondered aloud why we did not have something like this in Canada and the response was “why don’t you start one.” So in 1994, The Vancouver Island Stone Sculpture Symposium began.

With the help of the NWSSA board, President Vic Picou along with Rich Hestekind and Canadian sculptors Sandra Bilawich, George Pratt and Michael Binkley we started the first Canadian stone sculpture symposium which took place with 45 attendees. Andrew Poitier provided tools and stone was provided by Randy Zieber. 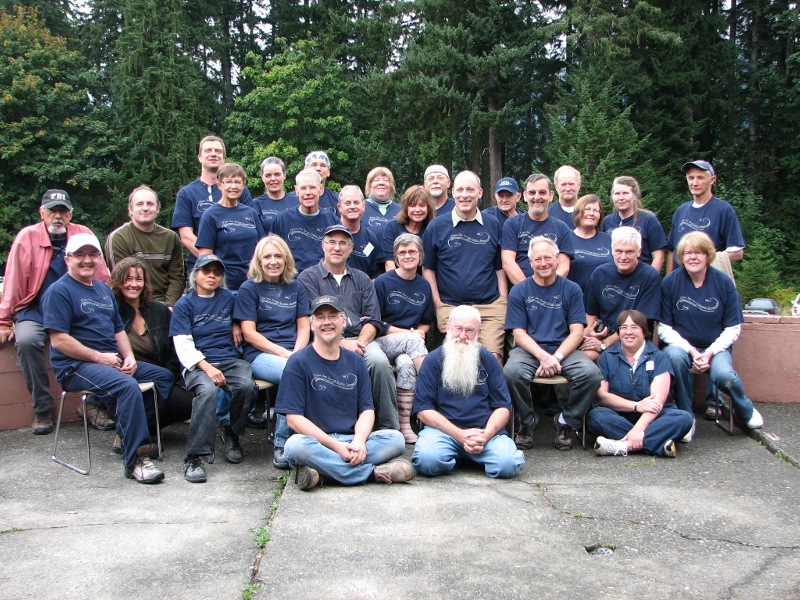 The Cowichan Lake Education Centre, in Lake Cowichan on Vancouver Island was the ideal location for the event because it had a large work field, excellent accommodations, food and a helpful staff. Unfortunately over time the Education Centre fell into disrepair and the symposium chose to move.

After the first three years, a Canadian sculpture organization was formed, the West Coast Sculpture Association (WCSA). I then passed the mantle of organizing symposia to Simone Luckham, who moved the symposium to the Thetis Island Retreat where it remained for many successful years. But, once again the quality of food and accommodation came into question and a new location was searched for. An attempt to move the symposium to Zajac Ranch on the mainland met with less than hoped for results, forcing us to continue looking for a new home.

After an extensive search the symposium returned to the Cowichan Lake Education Centre which had been revitalized and renewed over the intervening years. The symposium had come full circle. Over the years many wonderful friends and sculptors have attended the symposium. In the early years we even had an outdoor bronze pour, most likely contravening all fire and safety rules but it was exciting! 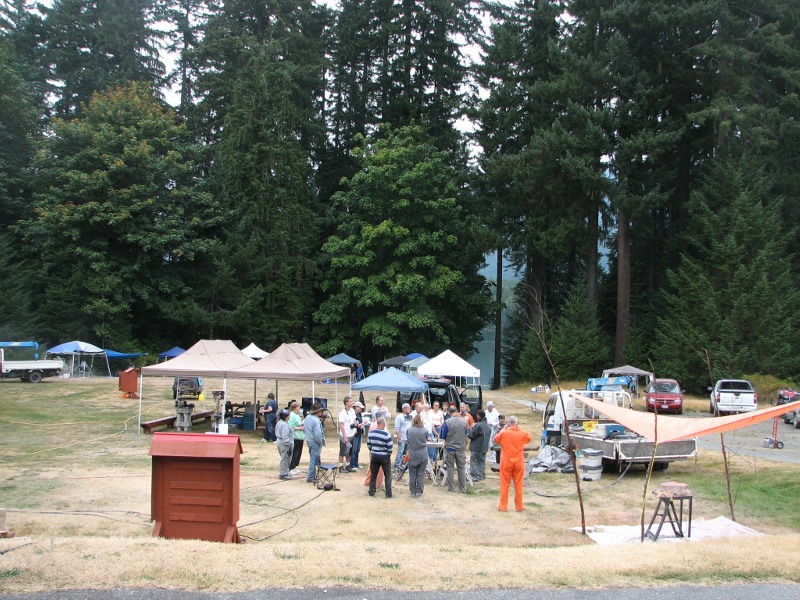 This year’s gathering marked the 17th annual symposium. Instruction was offered by Deborah Wilson, renowned Jade carver who shared many wonderful secrets with all in attendance. Your very own President Gerda Lattey offered an in-depth understanding of Basalt and its finicky disposition. And my brother, Sandy Cline came all the way from Ontario to share his hand carving techniques. As he has done for many, many years, Michael Binkley served as field instructor helping anyone and everyone who needed assistance with their sculpture. Randy Zieber, of Neolithic Stone, provided stone and tools to the attendees and a fabulous time was had by all. It was one of the best symposiums ever.

It has been a great honour to start this symposium so many years ago and see it continue throughout the years touching the creative hearts and minds of so many talented souls and to serve as President of the West Coast Sculpture Association for the last number of years. I look forward to seeing whatever evolutions it will take in the next 17 years. I personally would like to take this opportunity to thank all the people who made this event possible and to invite everyone who reads this to come and attend next year as we plan even bigger and better things. We are planning another exciting symposium for 2012 and we hope to see some of our US friends again.

And you can see Daniel’s work on his website: danielclinesculpture.com

Scams against sculptor's websites (and postings).

Early 2011 NWSSA email correspondence on the Listserve detailed scams that sculptors with websites might be prey to:

They are all versions of the “I Must Have Your Art Right Now,” scam.

As amazing as it may seem I am no art historian, however, neither is Jesse Helms and that does not stop him from going on and on about art. So, in the big scheme, etc., what's one more (albeit liberal) self proclaimed art authority one way or the other. Thus having proverbially marked my territory on this comer of the blather market, I thought it was time for me to explore how art might have been different if women had worn the power ties throughout history.

Most thinking people agree that women spent a disproportionate ratio of the past assigned to breeding and all its ramifications. If females were poor, producing art generally was put somewhere on the priority scale below preventing scurvy, avoiding the plague and living to 40. The importance of creativity seemed about as significant as having a Restoration make-over or going on a Donner Party ski vacation. 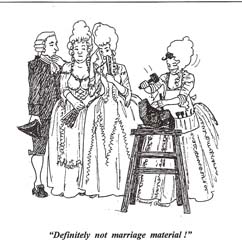 If wealthy, the possibilities for producing art were much greater, but being genteel and looking for the always elusive "good help" could really cut into a gal's spare time, not to mention put a crimp in the family's social standing. Serious female artists in many cases were considered eccentric, unnatural and often committable. Defmitely not marriage material, every good woman's ultimate goal. A little tasteful parlor painting or hitting it on the harpsichord during a soiree were OK as long as one left time to reproduce and entertain (not necessarily in that order).

Ramble, ramble, blather, blather. My point being, what would the old Louvre contain today if women had been "the force"? Well, we would see lots more kids on canvas and not just clean and posed. There would be dirty and sleepy and obnoxious and sick and laughing kids all over the walls. There would be more memorial paintings to the ones that never made it to adulthood every family until the 20th century had many that didn't. Occasionally canvases would have had dirty fmgerprints on them, pressed out creases and sculpture would embrace a few extra chips and scratches.

David would be in a different state of mind and a lot shorter.

They claim that gravity was discovered by a man, but women discovered it shortly after the first apple incident. Even Newton and his apples couldn't convince most male artists that this natural phenomena really existed. My proof? Silicone wasn't around yet, so where did all those perky breasts come from? Even Rubenesque women often seemed to stay eternally 18 and oh so balanced. Women wouldn't have done this. Number one, the Playtex Nurser wasn't here so with all this reproducing responsibility still on their shoulders reality was a factor. Also, women are often very competitive in the area of gravity knowing that lack-there-of has always been so highly prized by the hunter/gatherer part of the population. Why paint a 35 year old, size DD, perky cookies as all get out and sabotage their own boudoir?

Nudes on chaises wouldn't have been nearly so prevalent. How many young nubile women would strip down for some other woman, splay themselves in some very uncomfortable position for eons, in a studio with no central heating all for the promise of and sherry. How many women would ask another woman to do it? "Still Life with Dead Bird" would not have appeared so regularly if women did the plucking.

Not as many dead birds maybe, but horses would have been everywhere, especially in work done by young women. I've never understood horse fever myself (a call for hormone therapy?); but I do remember sitting by females all through school who spent half their lives drawing horses in class while I threw spitwads and taught myself how to tum my tongue upside down.

War would still have been a constant subject because it has always been such a major force in history. Women, however, would have portrayed heroes with images of the injured and exhausted men returning home (some still haunted years later), or the fallen on the battlefield, or empty places at the dinner table. Not some guy in spotless white tights and gold lame fringe hanging off the prow of some boat, arm in the air. The reason: women cleaned the tights, dealt with the sick, barely kept families fed after the deaths and never reveled in sending their man, son, or father away to war even when necessary.

Yes, I'm afraid I also have to bring up the fact that bigger and harder would have had only one significant role to play in art.

Not being too well versed in the ins and outs of religious art doesn't stop me from pointing out that the whole Adam/Eve/Apple/Snake fiasco wouldn't have been anywhere near so popular a subject with women artists.

I suspect we'd have a much clearer view of what yesteryear's version of the beer gutted, T-shirt clad, channel surfmg type of male forefathers looked like, but still be at a total loss for what wearing a baseball cap on backwards says about our society.

There would be more images of women alone, with children or in old age, waiting. Waiting for men to return or not, from hunting, mining, the sea, war.

Don't misunderstand, I wouldn't want to give up one piece of art already existing based on the gender of the person who created it, but I often feel a loss for all of humankind that before this century began, we all must have "lost", or rather never found so much potential art. I know that for every era before ours, there were Butterfield horses needing to run, Hepworth designs waiting to absorb us, Cunningham hands wishing to explain us, Graham-like movement held in, wanting to burst, and O'Keefe blossoms that never were allowed to bloom aDd grow. It was nobody's fault - it just was; however, I'm so glad, for all of us, that times have changed.