Romancing the Marbles of Portugal

ROMANCING THE MARBLES OF PORTUGAL
by Michael Yeaman

A geologic motivated drive through the rolling hills of southern Portugal’s Alentejo region leads you to the famous Estremoz anticline.  This elliptic structure measures 42 by 8 km and is the home of the famous marbles of Portugal.  The marble crops out around the outer rim of this anticline where the ancient quarry towns of Estremoz, Borba and Vila Vicosa are located.  These marbles are of Paleozoic age and were folded into the Estremoz anticline when the paleo-Atlantic ocean closed about 250 mya.  These beautiful marbles have been quarried since ancient times with the first recorded historic use in 370 B.C. for a certain Carthaginian captain Maarbal’s tombstone.   These deposits were also widely exploited by the Romans as represented by their use in the Roman Temple to Augustus in nearby Evora (figure 1).

My trip to this lovely region of Portugal began with a quick stop at the giant Margratex TM quarry and preparation yard outside of Vila Vicosa (fiqure 2).  Here giant blocks and sheets of coarse grain, snow white marble are stacked ready for shipping. The sugary or “sucrosic” character of this stone makes it both marvelously reflective and yet difficult to sculpt into fine details.

As my drive into Vila Vicosademonstated, I was truly in the land of marble.  On both sides of the road, were piled mountains of quarried and stacked marble.  Much of this stone appeared to contain enough irregularities and structural or color flaws to be considered scrap( figure 3).  But boy, what I would have done to have a flatbed of this scrap at my sculpting studio back at home.

Next stop was one of the few museums in the world to be dedicated to the marble and the marble industry. The Muse doMarmore in Vila Vicosa (fiqure 4).  Here the friendly museum director showed me around the extensive collection of marble and historic industry equipment, including a remarkable Roman road grader made of solid marble (figure 5).

The museum houses a complete set of all the key important Portuguese marbles, including the beautiful Ruivina banded marble often made into matching “bookends” of jaw-dropping wonder (figure 6).  I was also intrigued to find out that Vila Vicosa had bi-annual sculpture conventions where this wonderful stone was supplied for competitive sculpting.

Returning to Evora, the ancient walled Roman capital of southern Portugal and UNESCO World Heritage site, I was able to close out my marble indulgence with a visit to the city’s famous museum.  Here I found hundreds of marble sculptures from Roman lions (figure 7) to medieval gargoyles (figure 8) to modern masterpieces (figure 9).

In the end leaving all this marble and sculpture behind was hard.  Only the knowledge of a potential return to Vila Vicosa to sculpt some of the same stone worked by Augustine stone masons made it possible to postpone my romance with the marbles of Portugal.

What draws you to a sculpture? What puts your creative juices on the boil? In this, and future issues, we will present art that may do that by virtue of its greatness or its whimsy or perhaps by unidentifiable forces that are just "there."

THE WHIMSICAL ROCK ART OF Hirotoshi Itoh
Whenever we hear the words stone, rock and boulders we usually associate these words with qualities that pertain to hardness, cold, inhospitable and harsh. So it really takes a visionary to change this perception and turn it to its complete opposite. However, giving a piece of hard stone that soft look isn't an impossible feat. In fact, Japanese artisan Hirotoshi Itoh has managed to successfully execute this craft. 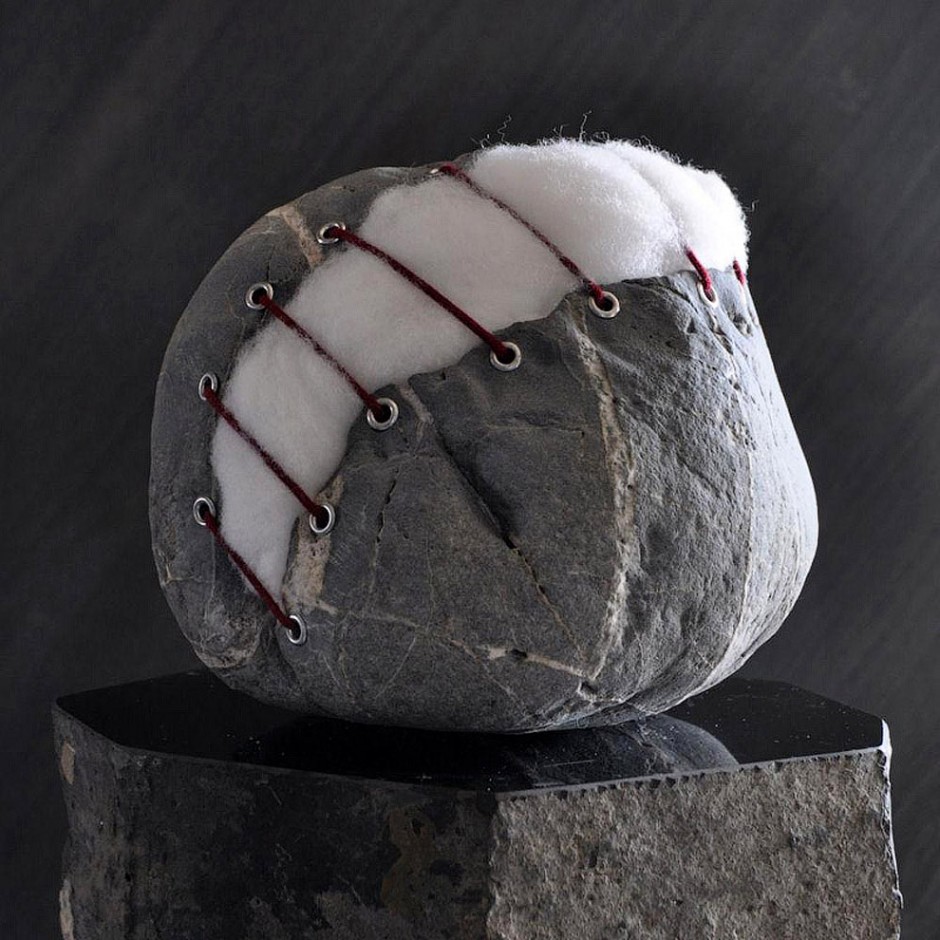 Hirotoshi Itoh is a stone sculptor artist based in Matsumoto City in the Nagano Prefecture in Japan. He graduated from the Tokyo University of the Arts in 1982 and showed interest in working with metal sculptures. After finishing college, Itoh took over his family's masonry business in his hometown in Nagano. This was the time that his focus shifted from creating metal sculptures to sculpting stones in order to give them the quality of softness and warmth.

To create his art pieces, Itoh uses locally sourced rocks and materials from the town's river and uses the common sculptor tools such as chisels and saws in order to grind and shape rocks to the desired form. Accessories such as zippers, coins and other materials are added to complete the piece. His designs are usually inspired by common items such as bags, purses and shirts.

This is another Craig who has also just recently joined NWSSA. He graciously agreed to shares how he felt about his first carving experience with us.

I arrived around noon and came upon a sun drenched, seemingly abandoned forest field filled with rain canopies, mounds of tools, and hunks of stone.  I was soon greeted by a friendly soul named Kim, and following a brief exchange we joined other folks for lunch in the cafeteria.  Kim introduced me to a twinkle-eyed chap named Lane.  I shared that my motivation for joining the symposium was to rekindle my creative fire inspired by connecting with other artists.  Lane soon inquired about my writing skills and influenced me to compose a brief article of my "first impressions" of the symposium. 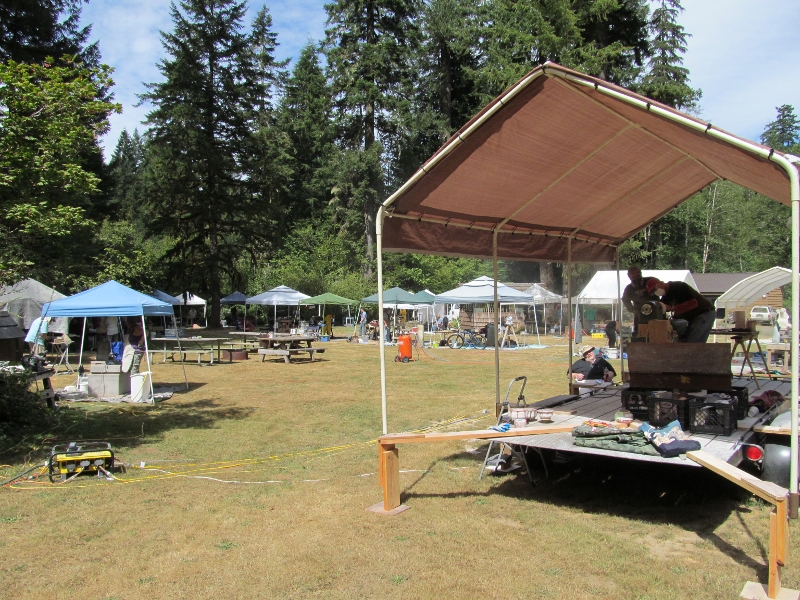 I spent the afternoon and the following morning, meandering about capturing photos and conversations with a dozen carvers.  Folks kindly indulged my inquiries and comments about materials, tools, textures and designs.  Common to all, was a generosity of spirit and willingness to share a few reflective moments. This reception felt inclusive and resonated with a strong sense of community.  I was impressed by the camaraderie and enjoyed the constructive discussions / recommendations freely shared.  It was energizing to chat with so many creative, confident folks with healthy, yet balanced egos.  Perhaps, stone sculptors enjoy a unique culture informed by the medium we choose to engage.

Structurally, I found this symposium well organized, educational and very supportive.  The natural forest location was inspiring and the worksite layout seemed organic and smart.  I liked the casual and informative "tool time" chat(s) and enjoyed the impressive evening presentation of Uchida's amazing art work (I believe it was Erik who did a great job translating!).

Although my attendance was brief, it yielded a strong and positive impression.  I left feeling inspired and thankful.   A special note of appreciation goes to Tom and Daniel for their assistance selecting tools and to MJ for nudging me to "go for" the Italian marble.   Lastly, sincere appreciation to all for helping rekindle my fire. . .